Capixyl for Hair Growth: Everything You Need to Know

Capixyl is a plant-derived product for promoting hair growth and reversing hair loss. It is a relatively obscure option, but men looking for prescription-free, natural treatments might find value in it.

This article will help you understand:

Capixyl is a non-prescription topical product for promoting hair growth. A company called Lucas Meyer cosmetics holds the rights to it. They sell it as an “anti-aging hair care complex.” Other company publications describe it as a “hair fertilizer.”

Capixyl is a combination of two active ingredients.

Red clover extract is a plant extract rich in Biochanin A. This is a naturally occurring compound of the flavonoid class (1). It is found in various plants. The extract in Capixyl is from the red clover plant. 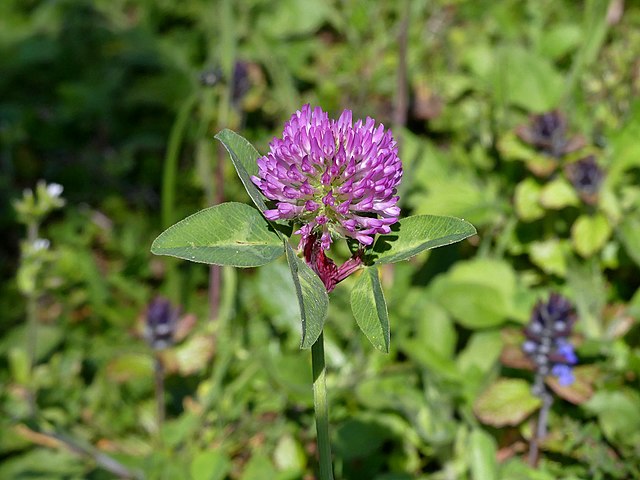 This a short peptide (protein) composed of four amino acids. It is a “biomimetic peptide,” a manufactured peptide that mimics a naturally occurring one.

Companies engineer biomimetic peptides to be more stable and effective compared to their natural counterparts. The tissue surrounding the hair follicles (Extra Cellular Matrix or ECM) is crucial for proper hair growth. The ECM is constantly remodeled during the various phases of hair growth. It is critical in maintaining the hair follicle and controlling its volume. Acetyl tetrapeptide-3 promotes this ECM regeneration. The end result is stronger hair.

Scientists believe this hormone is a major contributor to male pattern hair loss (also called androgenetic alopecia or AGA) (4). Biochanin A inhibits the enzyme that synthesizes DHT in the human body (5). This enzyme is called 5-a reductase. The end result is lower levels of DHT. According to the company, this reduction is in the order of 93%.

This is the network of collagen, proteins and other substances that surround the hair follicle cells. They serve as substrate for follicle growth. Improper renewal of the ECM might lead to hair loss problems.

Chronic, low-level inflammation of certain hair follicle areas is a hallmark of AGA. In vitro results led the company to claim a 48% reduction in inflammation.

These are critical in regulating the follicle’s growth cycle and ultimately its size.

The clinical evidence for Capixyl is limited. In all, there are three clinical studies on men with AGA.

The makers of Capixyl have published results from research with human volunteers (6). You can find the lay overview in a company marketing brochure.

The company researchers split 30 men with AGA into two groups. Half were treated with a 5% Capixyl lotion and the rest with placebo. Application was once daily. The study lasted four months.

According to Lucas Meyer, the men in the placebo group had a 2% reduction in their anagen hair density per cm2. The Capixyl-treated men had an average 13% increase.

The opposite was the case for telogen hairs (non-growing). Here, the placebo group saw a massive 23% increase in telogen after 4 months. The Capixyl group, on the other hand, had a 29% decline in telogen hair.

These figures seem perplexing. At any given time, approximately 99% of scalp hairs are either in anagen or telogen. We would therefore expect the decrease in telogen hairs to be accompanied by a more or less similar increase in anagen hairs. Furthermore, it is not clear why the telogen hairs in the placebo group increased so dramatically. AGA is a very slow, gradual condition. The dramatic spike in telogen over only 4 months is puzzling.

Disappointingly, the authors of the study do not provide any sample before and after head photographs. If valid, these large differences in macroscopic hair counts should produce clearly visible cosmetic improvements. Yet there are no such photos in the original research article or the company brochure.

In 2019, a pair of researchers from Turkey compared minoxidil 5% against a Capixyl-containing topical (7). The topical also included Redensyl and Procapil. These are two plant-derived compounds that are discussed in more detail later. The researchers recruited 120 men ages 18-55. The men had mild to advanced hair loss. Each man was randomly assigned to receive either minoxidil or the combination of Capixyl, Redensyl and Procapil (RCP). Treatment was twice daily.

The main efficacy measure was global assessment of the before and after head photos by dermatologists. This was on a 7-point scale that ranged from marked worsening (-3) to marked improvement (3). No visible change was 0.

60% of men in the minoxidil group had barely visible improvement (+1). All the remaining were either unchanged or deteriorated.

The men in the RCP group had much better results. 3.7% got the best possible evaluation of +3. 48.2% were moderately improved (+2) and 37% had barely visible improvement (+1). The remaining 11.1% were unchanged or deteriorated. These differences between the two treatments were highly statistically significant.

In the images below you can see the before and after head photos of some men in the RCP group. The before photo is on the left. The photo on the right was taken after 24 weeks of treatment with RCP.

These are very encouraging results.

The major limitation, however, is that the treatment was a combination of 3 active ingredients. Capixyl was only one of the three. For this reason, we cannot know the extent to which the Capixyl was responsible for the results. On its own, Capixyl would have very likely produced inferior regrowth.

A 2020 study out of Thailand compared Capixyl in combination with ginseng extracts against 3% minoxidil (8). Ginseng extracts are thought to promote the proliferation of dermal papilla cells in the hair follicle. These cells are critical in regulating the hair growth cycle and ultimate size of the follicles (9).

The researchers recruited 32 volunteers with AGA. Half of these were male. Treatment lasted 24 weeks.

Both treatments led to significant increases in terminal hair density. Treatment with the Capixyl-containing extract led to an 8.3% increase in terminal hair. This compared to 8.7% increase for the minoxidil-treated group. This difference was not statistically significant.

Patient satisfaction was high in both groups, and the differences between the two groups in this regard were also non-significant.

From left to right, you can see the photos of a man at baseline, 12 and 24 weeks into treatment with the Capixyl-containing formulation. There seems to be a clear improvement from baseline to 12 weeks. This is especially visible in the vertex (crown area). The regrowth then plateaus.

Consumers can find Capixyl-containing products in numerous forms. These are often sold for men and women alike. Various companies sell Capixyl-based products as serums, shampoos, hair sprays or hair masks. They even include Capixyl in mascaras and beard products.

Capixyl-based products often contain other non-prescription active ingredients. This means you can purchase most of them without a doctor’s prescription.

You can order these products online, from large retailers like Amazon. Your local pharmacy or health food store is unlikely to have them.

Capixyl is for topical use only.

There are no known side effects from Capixyl (6 , 8). Some users might develop topical irritation following treatment. This will likely be due to the vehicle formulation instead of the Capixyl itself.

As with any product, a tiny proportion of users might be allergic to Capixyl. In this case, they should immediately discontinue treatment.

Takeaway: Is Capixyl Worth It?

Capixyl is a non-prescription compound. Its makers market it as an active ingredient for cosmetic hair growth products. It is largely derived from naturally occurring molecules. Side effects are practically non-existent. As such, Capixyl can do no harm.

On the other hand, the evidence for Capixyl’s effectiveness is limited. Most of it comes directly from the makers of Capixyl. The two ingredients that make up Capixyl also have limited research backing them up against hair loss. This does not stop the makers of Capixyl from claiming it promotes hair growth in four different ways. These are very bold claims.

For this reason, it is difficult to recommend Capixyl as the first choice in a hair-loss routine.

Having said that, Capixyl might appeal to certain consumers. Most importantly, those who are interested in natural or non-prescription products (12). For these consumers, we would recommend a topical product that combines various naturally derived cosmetics. Aside from Capixyl, the most well know of these are:

These are prescription-free, largely plant-derived cosmetic products, in the same class as Capixyl. They also more or less free of side effects.

One major drawback is the high price for a typically very small bottle. Depending on the brand, this can start from $20 and go as high as $100 or more. Another problem is that many of these products have already been discontinued. This suggests low consumer demand.

Though no prescription is required, you can always discuss such products with your doctor prior to starting. Particularly if you are already on other hair loss treatments or medication of any sort.