It’s been over 20 years since the FDA last approved a pharmaceutical drug for the treatment of male pattern baldness (androgenetic alopecia). That drug was finasteride (1). 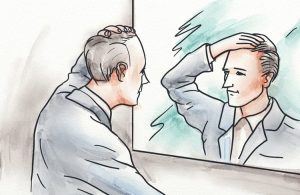 In contrast to other fields of medicine – where new, cutting-edge drugs have been numerous – the field of androgenetic alopecia has stagnated.

But that could very soon be changing.

There’s a new drug in middle to late stages of clinical development.

The drug is clascoterone and it promises to do something very similar to finasteride, but in a topical solution. And if we are to believe the manufacturer’s claims, there will be hardly any side effects.

Could this spell the end of minoxidil as the number one topical hair loss medication?

You will learn all about it in this article, including the very latest clascoterone news that you won’t find elsewhere.

Cassiopea: The Company Behind Breezula

Cassiopea is an Italian pharmaceutical company. They are publicly traded in the Swiss stock exchange since 2015. The company’s market capitalization (i.e. the total value of its outstanding shares) is currently around $320 million USD.

That may sound like a lot. But it is actually orders of magnitude less than even medium-sized pharmaceutical companies, whose market capitalizations are measured in the billions.

The company’s main focus is dermatological. They are developing treatments for acne, genital warts, and androgenetic alopecia.

Currently, there are three products in the company’s R&D pipeline.

The big one, the one that will determine Cassiopea’s future, is clascoterone.

Cassiopea owns the rights to this drug at least till 2028, with the option to extend beyond that. They are currently working towards getting it FDA-approved as a liquid solution for hair loss. The FDA recently approved the cream version for acne, though it is not yet available for sale.

The brand names of clascoterone will be Winlevi for the acne cream and Breezula for hair loss.

What is Clascoterone, and How Does it Work?

In simple terms, it combats hair loss by blocking the androgen receptor (AR) (4).

The AR is the target destination of the male hormone family, the so-called androgens.

This includes the most potent androgen of all, dihydrotestosterone (DHT). Scientists have known for decades that this molecule is directly implicated in androgenetic alopecia (AGA) (5).

DHT in the scalp binds to the ARs inside the hair follicles and activates them (6). Once activated, the ARs set in motion a cascade of biochemical reactions. These include the regulation of various genes’ expression.

Scientists do not yet know which of these biochemical reactions is responsible for the progressive hair follicle miniaturization that characterizes androgenetic alopecia (7). What is certain is that stopping DHT from activating the AR arrests the progression of AGA for most men.

When applied on the scalp, clascoterone interacts with the ARs within the hair follicles and surrounding sebaceous glass.

Clascoterone is a) similar enough to an androgen to bind to the androgen receptor, and b) different enough so as to not activate it.

With the ARs in the follicles blocked, DHT cannot bind to them and set in motion the slow but inexorable march to baldness. At least in theory.

Oral finasteride also works by blocking the action of DHT but in a different way. It inhibits DHT’s synthesis, so there is altogether less DHT in the system. The major problem with finasteride is the unwelcome side effects this massive change to the endocrine system can cause.  These include, among others, impotence and loss of sexual desire.

Unlike finasteride, it is very improbable clascoterone will cause any such problems. After application to the scalp, it is quickly metabolized to cortexolone. This is a molecule with a very weak antiandrogenic action.

Given that clascoterone a) is a topical treatment and b) rapidly metabolizes to less active compounds, there appears to be little potential for systemic absorption and serious side effects.

Last year Cassiopea published the phase II results of their acne research in a peer-reviewed journal. The FDA carefully looked at the results before giving marketing authorization.

But the company has yet to submit any of its baldness research to peer review. As a result, we cannot scrutinize the research methodology in detail.

The only information we can go by is the company’s own press releases. Meaning you can take what follows with a grain of salt.

In the snippet below you can see the hair count results, as per the company’s press announcement:

Clearly, there was new hair growth with all 4 dosages. In the placebo group (not shown in the table) the men continued to lose hair as expected, meaning the hair count changes were negative.

This being a phase II study, there was no comparator arm with the established treatment, which in this case would be minoxidil. But we know from numerous studies that minoxidil typically gives values between 15 to 20+ hairs per cm2. Meaning it probably outperforms even the most efficacious dosage of clascoterone (the 7.5% twice daily, which registered an average value of 14.3).

With regards to the patient’s hair growth self-assessments (HGA), the results were less encouraging:

Cassiopea only gave the percentage of patients who were deemed to have any sort of regrowth, be it minimal, moderate, or marked (+1,2,3 respectively). The twice-daily 7.5% group again had the best results, with 61.8% of men being assessed as having some hair regrowth.

What jumps out from this table is the astonishingly high percentage of men (50%) who were on the placebo (vehicle) treatment and reported perceiving some regrowth. This high percentage does not square with the objective decreases in hair count that the researchers counted on these subjects’ scalps.

Whatever the reason behind this discrepancy, the difference in positive self-assessments between placebo-treated men and those in the strongest treatment arm is only 11.8%. Again, we find it difficult to be overly excited with these results.

In the same press release, Cassiopea reports that the medication has an excellent safety profile. None of the patients experienced serious side effects. There were also no systemic effects on cortisol. In theory, this could have been an issue because clascoterone is chemically similar to a steroid.

Recruitment is expected to complete in the second quarter of 2020, and the last patient to finish treatment by the end of 2020.

On the face of it, Cassiopea’s decision to invest in clascoterone as a hair loss treatment for women is risky. As discussed above, clascoterone is an antiandrogen medication. This means it works by blocking or interfering with the normal functioning of androgens.

The pathophysiology of female pattern hair loss is even more unclear than men’s. At any rate, it has not been conclusively linked to androgens (9). On the contrary, the medical literature paints a very sketchy, hit-and-miss kind of response to women treated with these medications. Which explains why, to this date, the FDA has only approved minoxidil for female pattern hair loss.

Does Cassiopea know something the rest of us don’t? One way or another, we will soon find out.

Dosage and Side Effects

As per the range-finding studies, if and when clascoterone comes to market, it will likely be as a 7.5% solution. Like minoxidil, the application will probably be twice daily.

Patients appear to tolerate clascoterone relatively well. The available data suggests there are no serious or unexpected toxicities. The most common side effects in acne patients are local skin reactions such as:

Again, while the available data on side effects is encouraging, this could change in the future.

This was the case with systemic finasteride. Researchers slowly realized that while safe for most men, there’s a small chance some may develop irreversible side effects. However, for the reasons we discussed above (topical application and weak metabolites) this is unlikely to be the case with clascoterone.

According to Cassiopea, men on clascoterone do not experience loss of libido and erectile dysfunction, the two most dreaded finasteride symptoms.

When Can We Expect Breezula to Hit the Market?

Having completed phase II trials, Cassiopea is currently working to finalize a special protocol assessment for its Phase III research program with FDA. This protocol assessment would signify that the FDA approves the trials’ design, methodology, and statistical analyses, paving the way for the company to begin its phase III program in earnest.

Getting this special protocol assessment does not guarantee the drug’s eventual approval. This will always depend on the actual trial results, as well as finer trial details that do not go into the preliminary protocol assessment process. It is, nonetheless, a very important milestone in the research program, and dramatically increases the probability of eventual approval.

The last update from Cassiopea was that the FDA has requested changes to certain documentation. As of October 2021, the two parties had not finalized the special protocol assessment, and the phase III research had not begun.

If all goes well, expect the phase III clinical research to begin being organized in 2022. The first patient could start treatment by the end of 2022. Barring any further delays, the trial should wrap up by the end of 2023.

With some luck, you might be able to get your hands on some Breezula as soon as 2024!

For a tiny pharmaceutical company like Cassiopea, with a handful of staff and equity (as of March 2020) of a few million dollars, the stakes are huge.

If clascoterone makes it past the phase III trials and gets FDA approval, its success is guaranteed. I won’t even hedge this statement with “almost guaranteed” or “all but guaranteed”.

Clascoterone for hair loss will sell. A lot.

It has been over two decades since the FDA approved finasteride. The medical community is eager for a new treatment option, not to say anything of hair loss sufferers themselves. At this point, any new drug that gets the coveted FDA approval will be a commercial success, at least in the beginning.

Whether it will turn out to be a success for the average user, at least compared to existing options, is a different story.

The results we have seen so far do not allow us to be very excited. Clascoterone does not appear to regrow more hair than minoxidil. At the same time, it will certainly cost many times more. Between $100 and $200 per month, at least until the patent expires.  This will make it a non-viable treatment option for many men with hair loss.