If you are suffering from hair loss, chances are you are well aware of minoxidil solution (Rogaine). What you have almost certainly not heard of is adenosine.

While not marketed by the US Food and Drug Administration as a hair loss treatment, a number of studies have found that topical application of adenosine can promote hair growth in a manner similar to minoxidil. One study that compared it directly to minoxidil actually found its users reported being more satisfied with the treatment.

Adenosine is a compound that occurs naturally in the human body. This means there are hardly any side effects when applied topically.

While these qualities make adenosine an interesting proposition for treating hair loss, it is far from being a magic bullet. Read on to learn more about adenosine, its effectiveness as a hair loss treatment, and how to incorporate it into your hair loss regimen.

Adenine is one of the four nucleobases that are critical in the formation of DNA, the genetic material of all life. Adenosine is very similar though slightly more complex. It is an adenine molecule linked to a ribose sugar via a glycosidic bond.

Given its similarity to adenine, adenosine is ubiquitous in the human body, occurring naturally in all cells (1). It exerts biological action by binding to specific receptors on the surface of the cell leading to different physiological effects depending on the tissue (2). For example, in the cardiovascular system, it triggers vasodilation (widening of the blood vessels) whereas in the central nervous system it has neurotransmitter-like characteristics.

It is present both within cells and in the extracellular space, where its levels can increase dramatically following stress to the body.

Adenosine receptors are implicated in a variety of conditions, including inflammation, respiratory disorders, glaucoma, and allergic reactions. Research is currently ongoing to develop adenosine-like molecules (agonists) to treat pain, cancer, diabetes, stroke, and more (3). Its primary indication to this day remains the treatment of tachycardia, where it is administered intravenously (4).

For most healthy people, the modulation of adenosine receptors happens with their morning cup of coffee (5). Due to its chemical similarity to adenosine, caffeine blocks the adenosine receptors, particularly the A1 and A2A receptors. It is these effects that are believed to underlie its stimulant and mildly psychoactive properties. 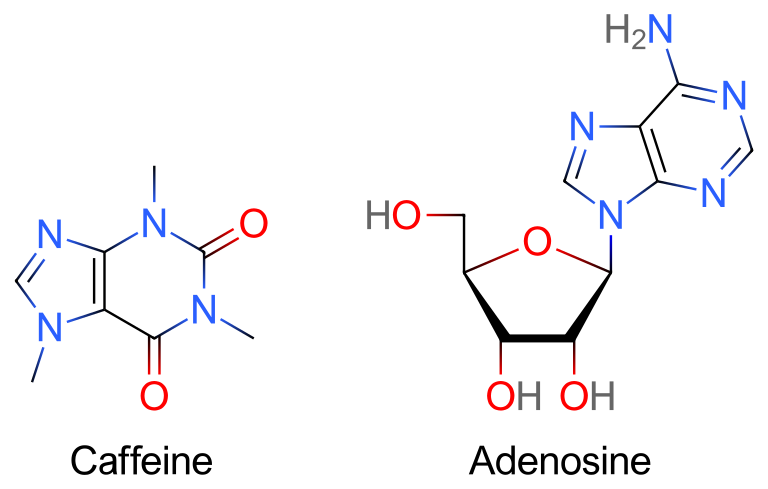 In 2012, a fascinating PET imaging study found that the equivalent of four to five cups of coffee can displace endogenous adenosine by as much as 50% on the A1 receptor (6).

How It Works for Hair Loss

To understand how adenosine might promote hair growth, we need to first look at minoxidil. While minoxidil’s mechanism of hair growth action is not completely understood, it is likely at least in part due to increasing the production of vascular endothelial growth factor (VGEF), which it does in a dose-dependent manner (7).

VGEF is a signaling protein that promotes angiogenesis, or the formation of blood vessels. It is also critical in the regulation of the hair growth cycle and the eventual size of hair follicles. A proposed mechanism of minoxidil’s VGEF upregulation is via an adenosine receptor pathway. The pathway triggers an increase in intracellular calcium and increases VGEF expression (8).

In-vitro studies with human dermal papilla cells have also found that adenosine upregulates the expression of Fibroblast Growth Factor-7 (FGF-7) (9). This is a signaling protein that is abundantly expressed during hair follicle development and growth. FGF-7 has also been found to inhibit the transition from the anagen phase of the growth cycle to catagen.

To date, there have been four clinical studies on the effectiveness of adenosine as a treatment for pattern hair loss. Three of these have been with men, with a combined sample size of 233, while one study was with women and had 27 participants.

Efficacy was assessed on the basis of patient satisfaction as well as an index called “recovery”: regrowth in excess of 65% of the thinning areas was rated as complete recovery, between 30-65% relative recovery, and under 30% was considered no recovery. After six months of treatment, only one patient in each treatment group showed relative recovery, with all others scored as no recovery.

The second study was published two years later out of Japan and compared adenosine to a niacinamide lotion (12). Niacinamide is a form of vitamin B3 that was used in this study as a weak hair growth agent. One hundred and one men with mild to advanced hair loss (grades II to V) were randomly treated with either 1) a 0.75% strength adenosine solution or 2) the dose containing niacinamide. After 6 months, regrowth was assessed through objective hair counts and global assessments by blinded dermatologists.

Eighty percent of men in the adenosine group were classified as showing very clear, clear, or fairly clear improvement compared to only 32% for niacinamide. The remaining 20% of adenosine- and 68% of niacinamide-treated patients were classed as showing slight improvement, no change, or deterioration. It is important to note these global assessments were not solely based on the before and after photos of the entire head. The dermatologists also took into account the macroscopic data on hair density and thickness.

Adenosine also significantly increased the proportion of thick hairs with a diameter larger than 60μm. The results were less encouraging in terms of hair density, where adenosine resulted in an average increase of five hairs per cm2 compared to one hair for niacinamide. This mild increase was not statistically significant. For comparison, most minoxidil studies report between 15-20 new hairs per centimeter squared.

In terms of overall self-reported patient satisfaction with the treatment, there was no significant difference between the two groups.

The last study with male volunteers was published in 2016 and compared adenosine 0.75% to placebo (13). After six months, the 38 men in both groups were assessed on the basis of changes in hair diameter and density, as well as global assessment by a dermatologist.

Due to its androgen-independent mechanism of action, adenosine should work just as well for female pattern hair loss. And indeed this was the finding of the only published study in female participants to date (14).

This research was unique in that treatment lasted 12 months, twice as long as the studies on men. The 27 women were randomly allocated to adenosine or placebo in a double-blind manner. The researchers assessed efficacy through dermatologist and investigator assessments, subject self-assessments, and hair counts at the six- and 12-month mark.

After 12 (but not six) months, dermatologists noted significant improvement in 85% of adenosine-treated women compared to 36% treated with placebo. The growth rate of hairs in anagen, as well as the percentage of hairs with a thick shaft (larger than 80μm) also showed significant improvement for the adenosine group. However, there were no differences at either time point in terms of anagen hair ratio or hair density. Patients expressed more satisfaction with the active treatment at both six and 12 months.

In contrast to when it is administered intravenously or orally, topical adenosine is associated with minimal side effects. In the study that compared it to minoxidil, 3.8% of men reported side effects (itching and folliculitis) compared to 9.5% for minoxidil.

Having said that, patients with cardiac problems are advised to consult their physician prior to starting treatment, as systemically absorbed adenosine has the potential for cardiac complications.

How to Use Adenosine for Hair Loss

There are a handful of adenosine-containing hair loss products currently on the market, either in the form of a topical solution or shampoo. Some of these feature adenosine only, while others combine it with other active ingredients. Depending on what else is in the bottle, most of these products can be purchased without a prescription.

Alternatively, the more determined consumer can always prepare his own solution by mixing adenosine with a vehicle at 0.75% strength.

As a topical solution, apply twice daily as you might minoxidil.

As a shampoo, use it in place of your usual shampoo however often you typically wash your hair.

The limited research to date suggests that adenosine is biologically active against hair loss, though the results are modest. Two of the three studies on men have used a wide range of efficacy measures, which has the unintentional consequence of increasing the possibility of spurious statistically significant differences with the comparator group. This makes whatever positive results are reported more difficult to interpret.

Be that as it may, adenosine probably leads to a modest increase in hair density but is not sufficient to make a cosmetically significant difference. It also has a positive effect on hair shaft thickness but still not enough to produce visually discernible differences for most men.

When it comes to safety, adenosine is hard to beat with minimal to zero side effects in healthy patients.

Given its limited efficacy, it does not seem advisable to use it as a standalone treatment for hair loss, but rather in conjunction with another more active treatment. As always, it is advisable to speak to your doctor prior to starting any hair loss treatment, even one as mild as adenosine.