Microneedling For Hair Growth – Is It Effective?

There are a variety of ways to counteract hair loss using conventional methods – such as minoxidil and finasteride – and even some unconventional. One of the latter is microneedling.

In this article you’ll learn how to use microneedling, a common cosmetic therapy used for the treatment of skin imperfections, to stimulate hair growth.

I’ll cover the research studies which show that this method may be an effective way to combat hair loss. You’ll also learn why it’s important to perform the method correctly to prevent damage to the scalp and further hair loss and how to do so.

Microneedling is another name for Collagen Induction Therapy (CIT) and is commonly associated with the dermaroller (1).

This is a popular cosmetic procedure, used mainly for the treatment of wrinkles and other signs of aging on the face. It is also increasingly being used to treat scarring, acne, and other such skin imperfections (2).

How Can Microneedling Help with Hair Loss?

Microneedling works by causing small, pin-prick sized wounds in the skin. These are not wounds in the classic sense of the word, however, and microneedling should not cause bleeding when done correctly (both at the right depth and with the right amount of pressure).

These “wounds,” however, initiate the three healing phases which skin typically undergoes after trauma. This stimulates collagen production, as well as the production of new skin cells (3, 4).

After the treatment, there are three healing phases which the skin undergoes (5). They are: 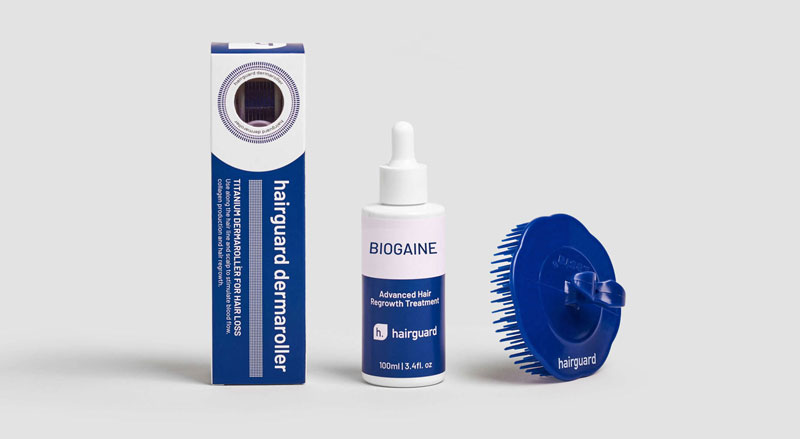 Why does scarring not appear?

As was shown in a 2007 UK study, scarring only occurs after skin injury has reached a certain depth (6). With microneedling therapy, the needles do not exceed this depth. They do, however, still cause enough trauma to instigate the inflammation-proliferation-maturation cycle.

The positive effects of this cycle was obvious when microneedling was used, in combination with Triamcinolone Acetonide, to treat alopecia areata (7).

Two patients, one male and one female, presented with alopecia areata. This is an immune-related cause of hair loss and typically results in patchy, uneven hair loss.

With the use of microneedling therapy, however, both patients saw positive hair growth results:

So, microneedling is effective at treating alopecia areata? But what about androgenetic alopecia, also known as male-pattern baldness?

There have been a variety of studies performed on humans to understand the effects of microneedling on individuals with alopecia.

Study: A Randomized Evaluator Blinded Study of Effect of Microneedling in Androgenetic Alopecia: A Pilot Study (2013)

In 2013, 100 men with Androgenetic Alopecia (AGA) were recruited to take part in a study that tested the effects of microneedling on hair growth. 94 men completed the study (8).

The men were randomly split into two groups. The first group, consisting of 50 volunteers, was treated with both microneedling and minoxidil (5 percent) lotion.

The second group, consisting of 44 volunteers, was treated with minoxidil (5 percent) lotion.

All participants’ scalps were shaved at the beginning of the study.

Throughout the study, researchers used a 7-point scale to measure hair growth.

These were the results of the 12-week study:

A grade 3 response on 7-point evaluation scale in the microneedling treated group.

Now, keep in mind that both groups did apply Minoxidil on a regular basis. However, the group that combined microneedling with Minoxidil application saw significantly more hair growth in the same period of time as the minxoidil-only group.

How much more hair growth?

As can be seen, the microneedling group still saw a significant increase in mean hair count (+91) over the Minoxidil-only group (+17) at the end of the 12 weeks.

It is obvious that microneedling in addition to minoxidil application is much more effective at inducing hair growth than just minoxidil alone.

Study: Response to Microneedling Treatment in Men with Androgenetic Alopecia Who Failed to Respond to Conventional Therapy (2015)

What about the effects of microneedling in men who have not had success with conventional hair loss treatments?

Finasteride and minoxidil are the most common therapies used in the treatment of alopecia, but their efficacy rates vary between 30 percent and 60 percent (9). This means that some men (and women) may need to seek out a less conventional approach.

In 2015, researchers from India recruited four men who had been on finasteride and 5 percent minoxidil solution for the past two to five years (9). While their hair loss did not continue, there were no signs of growth.

The four men were subjected to microneedling sessions over a six-month period combined with their current therapies. A 7-point evaluation scale was used to track results, and the men were followed up with for 18 months to assess treatment sustainability.

The patients experienced a +2 or +3 on the standardized evaluation scale, and new hair growth was noted after 8 – 10 sessions. Even further, these results were sustained over 18 months.

This is the first case series to report the boosting effect of microneedling with respect to new hair follicle stimulation in patients with androgenetic alopecia who were poor responders to conventional therapy.

So, how can you get started using microneedling to fight hair loss and induce the growth of new hair?

Microneedling can be performed in a clinic or at home.

The benefits of in-clinic treatment include the use of high-quality tools and access to professional knowledge and expertise.

Licensed microneedling professional such as dermatologists, aestheticians, and cosmetic surgeons can ensure that needles of the correct length are used for best results. They can also be sure that no damage is done during the procedure.

However, a clinical session can be cost prohibitive.

Microneedling is not a surgical procedure, and it is possible to perform it on yourself without any particular training. You may need to experiment with the various tools to find the one you’re most comfortable with.

How to Use Microneedling for Hair Growth

If you would like to begin microneedling therapy at home, you have a few options: dermaroller, dermastamp, or dermapen.

The dermaroller is the most common microneedling tool. It includes a needle-laden rolling pin attached to a handle that can be easily maneuvered over the scalp.

The other two options – the stamp and the pen – are smaller tools that enable you to target more specific areas of the scalp. They are also safer in that there is less risk of damaging surrounding hair follicles by pulling the hairs out at the root.

Once you have chosen your tool, it is time to perform your first session.

First and foremost, always sanitize the tool before use. Failure to do so can lead to infection and other such issues, and it is just not worth the risk. Never share your dermaroller to reduce the transfer of blood-borne disease.

To use the dermaroller effectively, focus on direction of application as well as pressure applied. 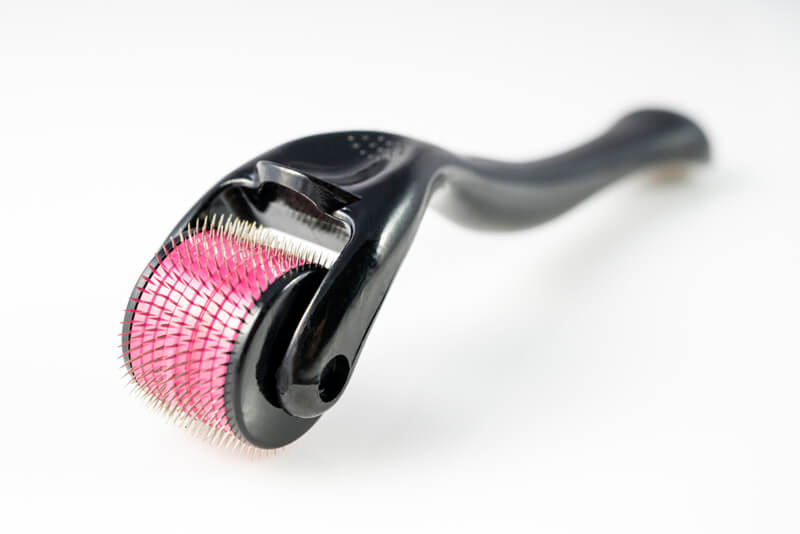 The dermaroller should not cause any pain (though you may feel tingling/stinging in more sensitive areas) and it should never draw blood. This means you should only apply enough pressure for the needles to penetrate the scalp to the depth of the pin.

As for direction, maintain a consistent pattern of up and down, side to side, and even diagonal. This will ensure even distribution of hair growth, and is important if you want to see results commonly associated with microneedling.

Perform each motion about 2-3 times.

The Dermastamp and Dermapen

If you have instead chosen the stamp or pen, the application process will be slightly different.

The dermastamp is a small, rectangular block attached to a handle. The dermapen is an even smaller tool with a circular appearance similar in style to a pen.

The stamp and pen will be applied with equal pressure as the roller.

To use the stamp, apply horizontally to the area you wish to target and hold in place for 3 – 5 seconds. Rotate the stamp vertically and apply pressure, and then rotate diagonally and do the same.

To use the pen, place the opening of the tool over the area. Press down (either by pushing the tool against your scalp, or by clicking the plunger towards the end) and hold for 3 – 5 seconds.

Potential Side Effects and Complications

As the procedure involves intentional wounding, there is always risk of complications and adverse effects.

The most common side effects include redness, tingling and/or irritation, bruising, and even oozing from the wounds. Redness and inflammation are very common and, according to the American Academy of Dermatology, should subside after five days 10.

There are those who should not perform microneedling without the supervision of a doctor. These include:

This precaution also extends to anyone with a history of open wounds, or anyone who currently has acne or open wounds on the scalp or hairline.

As shown in the 2015 study mentioned above, using microneedling alongside minoxidil can increase the absorption of the solution. However, applying minoxidil immediately after a microneedling session can cause symptoms including:

The most severe complication is infection as this is a concern whenever a wound is present. To prevent this from happening, the wounds should be kept clean and the tool should be sanitized before each use.

Whether you choose to use it in combination with, or in lieu of, traditional hair loss treatments including minoxidil or finasteride, it may provide the boost you need to stop your hair loss and even promote new growth.