The popular hair loss drug finasteride has a number of unpleasant side effects. With this in mind, researchers developed a topical solution that proves to have comparable results but less risk of adverse effect.

In this article, I’ll take a look at finasteride and its use as a treatment for male pattern baldness. This will include how it works, a comparison between oral and topical, and the side effects and complications you should keep in mind.

Finasteride as a Treatment for Genetic Baldness

Finasteride, more popularly known as Propecia, is an oral male pattern baldness treatment used by thousands of men worldwide. It’s been in wide use since 1997, and has gained quite a following since it was first released.

Prior to its use as a hair treatment, however, finasteride was used to treat Benign Prostatic Hyperplasia (BPH). This is an enlargement of the prostate, the male sexual organ that plays a key role in ejaculation.

Finasteride works – both in the contraction of the prostate gland and in the fight against thinning hair – by blocking the production of DHT.

DHT, or dihydrotestosterone, is an androgen steroid and hormone. It’s a metabolite of testosterone, and sensitivity to its presence can lead both to an enlargement of the prostate gland and Male-Pattern Baldness (MPB).

DHT is a hormone that is responsible for sexual development in young men. It’s produced when testosterone (the male sex hormone) and 5-alpha-reductase (an enzyme) interact.

Finasteride was made specifically to inhibit 5AR’s testosterone-converting activities, as this was a proven way to reduce the size of enlarged prostates.

Another effect, however, is the reduction in hair follicle miniaturization.

As mentioned, DHT is present in all men. However, men who are predisposed to MPB have an increased sensitivity to DHT.

This sensitivity is present in select hair follicles (mainly, though near the temples and forehead) and is what triggers hair miniaturization and eventual loss.

As an oral supplement, finasteride works by inhibiting the activities of 5AR. This lessens the amount of DHT produced and, in theory, should put an end to hair shedding.

Unfortunately, this can also cause some unwanted side effects, such as loss of sex drive and inability to get an erection. I’ll get into that more below.

There’s no doubt that finasteride as a baldness treatment has been effective for many men. In fact, all you need do is look at the numerous studies backing up such claims.

For example, a 2005 study performed by Prasad et. al. studied the results of finasteride treatment in 80 men. The men were all diagnosed as having AGA, and were all between the ages of 21 and 40.

The men were split into two groups:

Of the 80 initial patients, 6 dropped out (from the finasteride group) due to adverse effects. Only 39 in total completed the study. 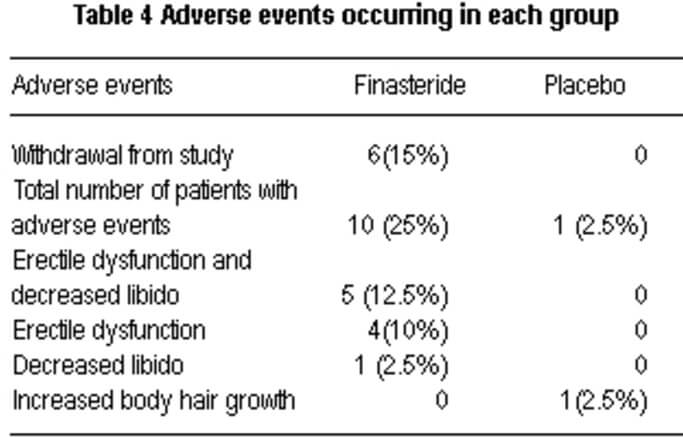 As expected, the participants receiving finasteride had significantly better results than the placebo group.

In fact, only 21.74% of finasteride patients saw a decrease in hair counts at month 12. On the other hand, 87.5% of the patients treated with placebo did see a decrease.

Further than just preventing more loss of hair, 56.52% of patients in the finasteride group were shown to be improved, whereas only 18.75% were in the placebo group.

Similar studies have been performed over the years, all with similar results.

While oral finasteride is effective, it can also have body-wide side effects. These side effects are enough to make many men stop taking the drug.

As a result, a topical finasteride solution was developed.

In theory, the topical solution should deliver the same 5AR-inhibiting medication to the scalp, but the side effects should decrease. So, what does the research have to say?

A 2009 study published in the Indian Journal of Dermatology, Venereology and Leprology looked to compare both treatment methods.

45 young adult men were included in the study (7 were later excluded), and it was double blind (meaning both the participants and the researchers were unaware of which treatment was being used for each patient).

The participants were each given a tablet and a gel.

Of course, each participant was only given one active treatment method (as monitored by a third party).

Both groups also saw a decrease in the sizes of an alopecia patch.

A study from 2015 further goes on to show finasteride gel’s effectiveness. In this case, however, it’s used as a maintenance treatment.

This study consisted of 50 AGA patients, all between the ages of 20 to 40. Previous to the study, all participants had used both minoxidil and finasteride (oral) for two years.

5 of the 50 had stopped treated for 8 – 12 months, but the other 45 went directly from treatment to maintenance.

Each patient was then treated with a topical minoxidil fortified with finasteride. This was done to determine how effective the combination was at maintaining hair growth results.

Overall, the 45 patients who went from treatment to maintenance showed positive results, with some even seeing increased hair growth:

Of the 5 patients who took an 8-12 month break between treatment and maintenance, results were similar:

While this study doesn’t particularly attest to finasteride’s hair-growing abilities, it does show that topical use after oral treatment can support and maintain the results that were achieved.

Side Effects and Considerations

While results are promising, are the side effects really worth it?

Let’s have a look at some of the most common side effects affiliated with finasteride use:

I don’t know about you, but none of those side effects sound worth it to me.

Even worse? These effects can persist even after finasteride treatment has ceased!

But are side effects as common when topical finasteride is used?

Unfortunately, more research needs to be performed before this can be sufficiently answered. Both of the studies mentioned above had small sampling sizes, and side effects weren’t the main focus of the studies.

Where to Buy Topical Finasteride

As a newer treatment, the companies that are currently producing topical finasteride (either alone or combined with minoxidil) are few and far between.

A few of the more popular sellers include MinoxidilMax and Hasson & Wong– however, neither is available in the US. So, what can be done instead?

If you’ve ever considered finasteride for hair growth, or if you’ve used the oral treatment and had bad effects, you may be considering topical finasteride as an option.

Make sure you talk to a qualified medical professional before starting any kind of hair loss treatment.