Between genetic hair loss conditions and the ill effects of daily living, the hair (and scalp) can take quite a beating. But whether you are looking to prevent breakage and hair loss, or treat and reverse its effects, you may be interested to know that olive oil could be the answer you are looking for.

This article will discuss the possible benefits of olive oil for hair growth.

You are going to learn about the scientific study carried out on oleuropein (found in olive oil) which showed it was more effective than the leading topical hair loss product at regrowing hair. You will also learn why these results likely occurred, and how you might be able to receive the same benefits.

What is Olive Oil?

Commonly used in the culinary arts as a frying oil or salad dressing, olive oil is an oil obtained from the olive crop. This highly-valued tree crop, originating from the Mediterranean Basin, is made into oil through the process of pressing.

Beyond its use in the kitchen, olive oil has made a name for itself in the cosmetics industry and has been used medicinally for thousands of years (1). 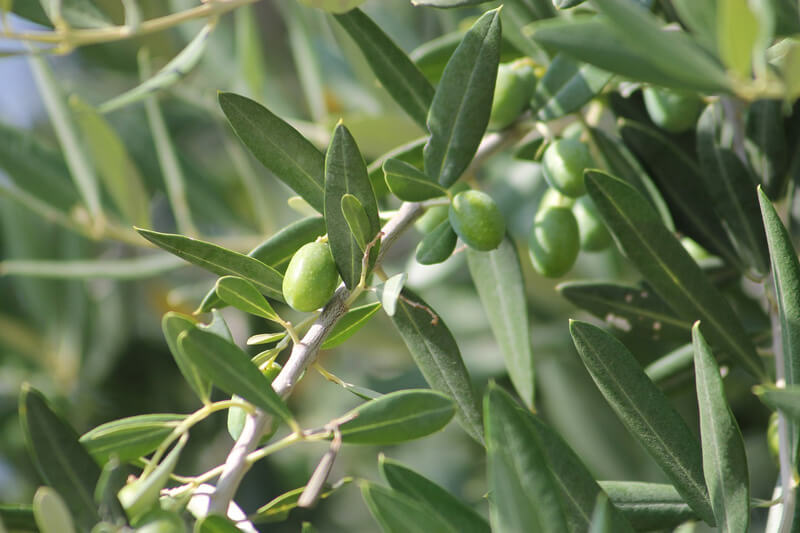 From the banks of the Nile to the birthplace of democracy, olive oil has enjoyed a high status and widespread usage (2).

And now, as more individuals are turning to natural and organic cures for their ills, olive oil is being celebrated as a miracle of sorts — from its ability to moisturize the scalp to its use as a hair growth stimulator (3).

Olive Oil and Its Direct Impact on the Hair Growth Cycle

A recent study performed by Tong, Kim, and Park shows that oleuropein, a component found in the leaves of the olive tree, induces anagen hair growth in telogen mouse skin (4).

There are three phases within the hair growth cycle (5).

Phase 1, Anagen – This is the phase of active growth and rapid cell division.

Phase 2, Catagen – This phase is transitional and allows for the newly-grown hair sheath to properly attach to its root.

Phase 3, Telogen – This phase is known as the resting phase, where shedding typically occurs. During this phase of the cycle, healthy individuals will lose 25 – 100 hairs per day, on average. 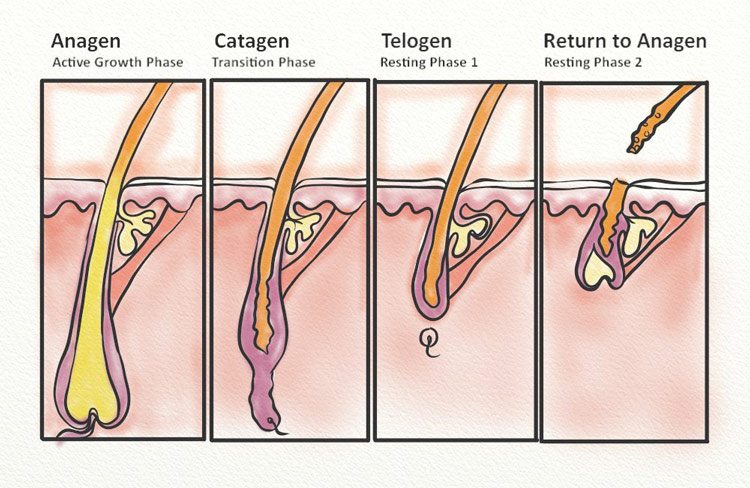 In individuals who suffer from alopecia, the anagen phase of the hair growth cycle significantly shortens over time.

In this particular study, 24 mice were split into three groups of eight. The backs of the mice were shaved at 8 weeks of age, and the telogen phase of the hair growth cycle was confirmed.

At the end of the 28-day study, skin samples of the mice were examined.

Each of the mentioned growth factors plays its own role in the growth and development of hair follicles. IGF-1, for example, is known to regulate cell proliferation which occurs rapidly during hair follicle formation (6).

There is no doubt that the upregulation of growth factor gene expression played a significant role in the study’s results, but there is another reason that treatment for hair growth proved to be so effective in the oleuropein-treated group of mice.

In a 2010 research study published in Developmental Cell, it was discovered that deletion of the β-catenin gene in dermal papilla cells of fully developed hair follicles led to the premature induction of the catagen phase in mice (7).

Further, the Wnt10b/β-catenin signaling pathway seems to play a role in the maintenance of the anagen phase.

In the oleuropein-treated group of mice mentioned in the previous study, researchers found that not only was there an increase in the mRNA levels of different growth factors, but oleuropein also led to the modulation of the Wnt10b/β-catenin pathway.

This pathway, proven to prolong the anagen phase, is largely responsible for the significant hair growth seen in the mice (8).

The daily ingestion of virgin olive oil leads to a decrease in circulating concentrations of interleukin-6, a known pro-inflammatory, and C-reactive protein, a responsive protein that indicates inflammation within the body (11, 12, 13).

Oleocanthal, a phenolic compound within virgin olive oil, seems to be the underlying reason for olive oil’s effective treatment of inflammation and inflammatory diseases (14).

Phenolic compounds can be found within a number of plant-based foods, such as chili peppers, oregano, and sesame seeds. Oleocanthal, however, is unique to virgin olive oil, and its various components are present within its very name (oleo – olive; canth – sting; and al – aldehyde). This unique compound is responsible for the irritating sensation felt by most individuals in the back of the throat when olive oil is directly consumed.

Interestingly, this very attribute is believed to be felt most strongly in individuals who are particularly sensitive to the positive effects of oleocanthal.

And, while this phenolic compound is structurally dissimilar to Ibuprofen, the non-steroidal anti-inflammatory drug, both compounds inhibit the very same enzymes in the prostaglandin-biosynthesis pathway which triggers inflammation (15).

As a natural inhibitor of cyclooxygenase enzymes, there is no wonder that oleocanthal plays such a large role in the reduction of inflammation.

As previously discussed, oleocanthal reduces the circulating concentrations of interleukin-6 and other inflammation-causing enzymes. This means that the anti-inflammatory effects are seen throughout the body, which makes oleocanthal a viable option for individuals looking to reduce scalp inflammation and irritation.

Are There Side Effects Associated with Olive Oil Supplementation?

While side effects associated with olive oil supplementation are few and far between, there are those individuals who may need to consult with their doctor prior to supplementation.

Contact dermatitis, or an allergic skin reaction, is rare. However, those with allergies may develop a skin rash similar to eczema and should cease supplementation immediately (18).

As always, women who are pregnant or nursing should consult with their obstetrician to ensure the safety of supplementation.

How to Use Olive Oil for the Treatment of Hair Loss

The easiest way to use olive oil is to apply it directly to your scalp.

You can also combine olive oil with other oils, like castor and almond oils, for even further benefit.

The Best Kind of Olive Oil for Your Hair

If you will be going the topical route, you will want to be sure you are using the right kind of olive oil. There are many different kinds of olive oil on the market.

For the highest quality, you should use an unrefined, cold-pressed extra virgin olive oil.

There are three processing methods for oils, including olive oil. They are refined, unrefined, and cold-pressed.

The refining process involves the use of chemicals and/or heat to remove impurities after extraction. This may also introduce other oils, like canola and vegetable oil, into the finished product.

Alternatively, unrefined oils are produced without chemicals or heat. The oil is simply filtered and decanted during this process, which results in clean, higher-quality oil.

Cold-pressed oils are also a type of unrefined oil, as they are processed without chemicals or heat. Once the oil is extracted from the olive, the olive oil will be set to cool so the sediment settles at the bottom. Thus the impurities are removed with very minimal processing.

Light versus Virgin versus Extra Virgin

If you look closely at the olive oils available at the supermarket, you will notice there are actually significant differences in color among the various kinds. This all comes down to whether they are light, virgin, or extra virgin. These are really just another name for refined versus unrefined.

Light olive oil is refined. The name refers to its light yellow color which is a result of the extensive refining process. These oils have the least amount of nutrients due to the heat/chemicals involved.

Virgin and extra virgin olive oils are types of unrefined oils. The distinction between the two comes from the level of impurities and overall quality.

These oils are both processed the same way — using expeller and/or cold-pressing methods. Once the sediment settles to the bottom of the oil, the rest of the oil is processed into batches.

Whether due to the quality of the olives or a relaxed processing method, virgin olive oil will fall short of the industry standards required of extra virgin olive oil. The aroma and flavor may be slightly flawed.

Is Olive Oil the Treatment You Are Looking For?

There are a few studies which suggest olive oil may play a role in hair and scalp health, and possibly even promote hair growth.

Olive oil supplementation may certainly have its benefits, but it is very unlikely to treat your hair loss condition by itself. To do this, you will need to fix the underlying cause of your thinning and loss. Only once you are addressing the problem directly will you see favorable results from such treatments as olive oil.