A widespread but untrue belief is that pattern hair loss leads to a quick and abrupt loss of hair. In reality, men with hair loss transition slowly and gradually from terminal hair to vellus (dormant) hair, before the hair follicle eventually disappears completely.

This article will look at what vellus hair is, and how it replaces terminal hair during the balding process.

In addition, you will learn the steps you can take to reverse the effects of hair loss and convert vellus hair back to terminal hair.

What is Vellus Hair?

Vellus hair is short, thin, lightly colored hair that develops on the human body already in childhood. People colloquially call it “peach fuzz” or “baby hair”. In Latin, vellus means fleece or wool. It is essential for temperature control and sensory awareness.

Vellus hair covers most of the human body, including the arms, torso, and legs. It is characteristically:

The density of vellus hairs varies across the body. For example, they can be several times denser on the forehead and cheeks compared to the trunk.

Vellus hairs cover more or less the entire human body except for:

This brings us to the next type of hair.

What Is Terminal Hair?

Terminal hair is the second main type of hair we find on the human body. Unlike vellus, it is long, thick, and generally more pigmented and dark. It is more common in adults, though children also have terminal hair on their heads from a very early age.

During puberty, many vellus hairs convert to terminal. This happens in both sexes but is more pronounced in males. The process is particularly pronounced in the face (beard), armpits, and genital area. It is largely controlled by the male hormones, and particularly dihydrotestosterone (DHT) (1).

The main site of terminal hair on both sexes is the scalp.

Just like terminal hair, vellus hair also undergoes a hair growth cycle. The difference is that vellus hairs typically spend a far larger portion of their cycle in the resting (telogen) phase, where they are not actively growing.

Whereas typically around 10% of terminal hairs are in the resting phase, this can be as high as 50% to 90% for vellus hairs.

As mentioned above, the scalp is the primary site of terminal hairs for both men and women. It normally has around 100,000 terminal hairs.

Androgenetic Alopecia (AGA) is by far the most common type of hair loss in men (2). It affects over one out of two men by the age of 50. The first signs are receding temples and a receding frontal hairline. The crown may then start to thin, followed by the entire top of the head.

In the healthy scalps of men who are not affected by AGA, terminal hairs significantly outnumber vellus hairs. This healthy terminal to vellus (T:V) ratio varies widely between various ethnic groups. In Asian men, it can be 17:1 and in Europeans approximately 7:1.

In men with AGA, the T:V ratio in the actively balding areas is significantly lower. Depending on the ethnic group, it can be as low as 3:1 or even 2:1. As vellus hairs are not sufficiently long, thick, or dark to provide sufficient coverage, the lower this ratio, the more visible the baldness will be.

Understandably, if you restore such a low T:V ratio to more healthy levels, this will partially reverse AGA. It will also significantly improve the appearance of your head.

The answer is yes, this is possible. Scientific studies that look at the effectiveness of various hair loss treatments often report the ratio of terminal to vellus hair as one of the efficacy parameters. They measure this using a method called dermoscopy of the scalp (trichoscopy). This involves looking at part of the scalp under intense magnification. The images are fed to software that automatically measures the various hair parameters, such as the number of terminal hairs, the number of vellus hairs, and the ratio between the two.

The more this ratio improves, the better the treatment. So restoring vellus hair back to terminal is achievable and indeed expected of successful hair loss treatments.

The two important caveats are that a) it will only happen with some but not all vellus hairs and b) the earlier in the balding process you are, the better your results will be.

There are other individual factors that also come into play, namely hormones and genetics. For this reason, the process will vary significantly from one man to the next.

How to Turn Vellus Into Terminal Hair

Here are some proven ways of turning vellus hairs back into terminal, increasing your T:V ratio, and restoring the appearance of your head.

1. Remove DHT from Your Scalp

DHT is the male hormone that scientists believe causes the thinning and balding characteristic of (AGA) (4). This condition leads to hair follicle miniaturization and, eventually, the conversion of terminal to vellus hairs. Removing or blocking DHT is the obvious first step in halting and reversing this process.

There are two ways to remove DHT from the scalp: systemically and topically. And while blocking DHT systemically can be risky, it is one of the more effective ways to combat pattern hair loss in men.

One way to do so is with finasteride (5).

Finasteride is an oral prescription tablet. You can find it under the brand names Proscar (5mg) and Propecia (1mg). Merck originally sold it as Proscar to treat Benign Prostatic Hyperplasia. They eventually also marketed it in the lower 1mg dose for hair loss, under the brand name Propecia. The FDA approved it for this indication in 1992.

Interestingly, finasteride does not block DHT directly. Instead, it inhibits the enzyme 5-alpha-reductase (5AR). This enzyme plays a major role in the conversion of testosterone to DHT (1).

Without 5AR, our body can still make DHT, but in far smaller quantities. Research found that finasteride can decrease DHT levels by up to around 70% (6). With less DHT present in the system, fewer DHT molecules will eventually attach to the androgen receptors in the scalp and hair follicles. This inhibits the hair follicle miniaturization and can stimulate healthy hair regrowth.

Because finasteride is so effective at lowering DHT all over the body, this can produce some side effects. The most common of these are sexual in nature. They include erectile dysfunction, reduced sexual desire (libido), and changes in semen parameters (7). That is why some people avoid finasteride, opting instead to block DHT topically.

Use a DHT Blocker Shampoo

As the name suggests, a DHT blocker shampoo contains DHT-blocking ingredients. These work to remove or inhibit DHT’s regular function at the scalp. They typically include plant-derived ingredients. The most popular of these are saw palmetto, pumpkin seed oil, and pygeum bark.

In addition, these shampoos can also contain nutrients to promote a healthy hair growth cycle. Examples of these are biotin and vitamin B12.

The evidence for the effectiveness of these ingredients varies in terms of quality and quantity. With proper research, you can find one that will work to block DHT to some extent.

When your follicles have been miniaturized from hair loss, the best thing you can do is stimulate them.

There are a number of stimulation methods that are easy to incorporate into your regular hair care routine.

Circulation of blood to the scalp is essential for hair growth. This is because circulation delivers nutrients and oxygen to the follicles. Both of these are necessary for hair health. 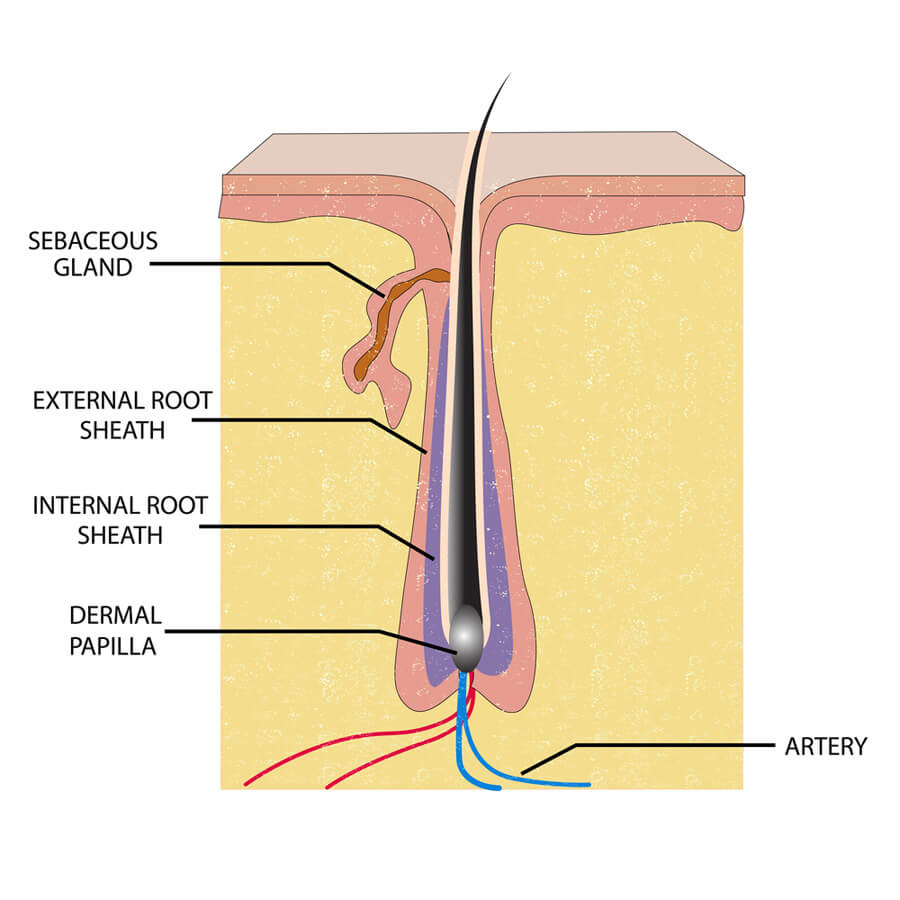 Fortunately, increasing circulation to the scalp is simple with massage and scalp exercises (8).

Massage is the manual manipulation of your scalp with your hands. All you need to do is use your fingers to rub in a circular motion. Begin at the crown and work towards the sides and back of the head. You can do this for 5-10 minutes each day.

You can also stimulate the scalp with hands-free exercises. These simply involve the stretching and tensing of the scalp muscles (done by moving your eyebrows up and down) and will go a long way in relieving tension (and, perhaps even stress). You can do these anywhere, even at work.

If you are looking for an unconventional way to stimulate your scalp, then inversion therapy might be worth looking into.

Simply put, inversion therapy involves hanging upside down for a few minutes. The effect is to increase blood flow to the scalp and follicles. You can do this with special inversion equipment, with the help of some monkey bars, or by simply hanging your head over the side of a couch or bed.

To further increase inversion therapy’s effects, you can also massage the scalp at the same time.

Microneedling is a stimulation method that uses many small needles to injure the skin (9). The holes caused by the needles are not large enough to cause permanent damage. They are sufficient, however, to promote skin rejuvenation and hair growth. The most common devices used for this purpose are the dermaroller or dermapen.

When done right, the therapy causes only minor pain and irritation of the scalp. This quickly goes away.

Microneedling works very well to stimulate new hair growth (10). Scientists do not yet know exactly how microneedling accomplishes this.

Nevertheless, clinical research finds that combining microneedling with a topical stimulant like minoxidil can increase the latter’s effectiveness by two or three times (11). In the before and after photos below, you can see examples of men who experienced dramatic regrowth with such a combination treatment.

You can hire a professional’s services for microneedling therapy. This is what individuals who use this treatment method for acne or scarring often do. If you are suffering from AGA, however, you can also perform this treatment at home, using an inexpensive dermaroller. This is what the large majority of men with AGA do.

One of the main features of AGA is the slow but steady replacement of healthy terminal hairs by miniaturized vellus hairs. Halting and ultimately reversing this process is key.

There are a number of treatment options you can use to achieve this. These include standard pharmaceutical interventions, plant-based compounds as well as modalities like massages or microneedling.

The degree to which you will be successful in restoring vellus to terminal hairs will depend on selecting the right treatment that works for you. There are also individual factors like genetics that are unique to everyone.

Having said that, a treatment regime that combines various modalities is likely to give the best results.