If you have been to a health food store recently, chances are you saw Coenzyme Q10 on the shelves. According to consumer reports, it is the fourth most widely purchased nutritional supplement in the US (1).

Due to its fundamental role in human metabolism, users take it for a variety of indications.  The most popular uses are to promote cardiac health and relieve muscle pain.

What most people don’t know is that Coenzyme Q10 might actually be critical to healthy hair growth. If you are suffering from hair loss and are interested in using Coenzyme Q10 as a hair loss supplement, read on.

What is Coenzyme Q10?

Coenzyme Q10, also known as Ubiquinol and CoQ10, is a fat-soluble substance stored within the tissues of the body (2). Although it resembles a vitamin, it is not strictly one because the body is able to synthesize it.

CoQ10 exists within the eukaryotic cells in the body, primarily within the mitochondria. Here it is used in the synthesis of energy in the form of Adenosine Triphosphate (ATP) (3).

This cellular respiration process produces 95% of the total energy reserve within the human body. This makes coenzyme Q10 vital to the optimal functioning of cells in the body.

Low levels of coenzyme Q10 cause symptoms such as muscle weakness, tiredness, reduced stamina, and premature aging of the skin and hair, just to name a few.

Vegetable oils are generally rich in CoQ10. Here are the ones at the top of the list:

Other foods rich in Coenzyme Q10 include:

Its Role In Aging

The level of Q10 in the body decreases with age. It can be especially low in people who suffer from conditions like heart disease, Parkinson’s syndrome, muscular dystrophy, and HIV.

The most bioactive form of coenzyme Q10 is Ubiquinol. Supplementing with this form could give better results, particularly for older or ill people. 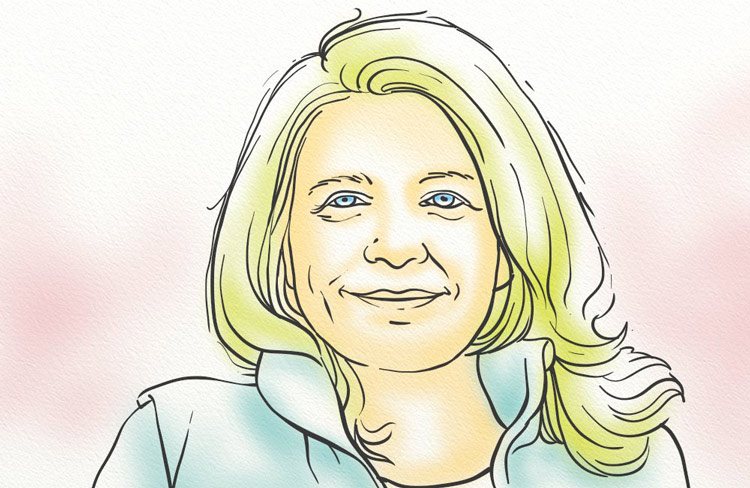 Let’s take a closer look at how CoQ10 supplementation may aid hair growth.

1. It Boosts the Production of Keratin

CoQ10 (Ubiquinol) has an anti-aging effect on hair health, as it boosts the process of gene expression which is involved in the synthesis of keratin (a protein found in hair), especially the proteins that are compromised by the aging process.

A clinical trial evaluated the effects of using a CoQ10-enriched shampoo and tonic formulation. Over four days, a group of healthy volunteers older than 40 applied these daily (4).

The results were positive, showing a proliferation of the protein keratin in the hair roots of the participants who had used the shampoo. The researchers concluded that:

Coenzyme Q10 is an ideal ingredient for hair care formulations, providing anti-aging properties through activation of specific keratins aligned with the needs of mature hair.

2. It Works as an Antioxidant

Coenzyme Q10 in the form of Ubiquinol is also a strong antioxidant, which neutralizes the free radicals that cause oxidative damage to the body’s DNA and cells (5).

It is also able to restore the body’s supply of vitamin C and vitamin E to their bioactive forms. Vitamin C and E are also antioxidants.

This double antioxidant effect protects the cells in the hair follicle from the damage caused by pollution and toxins, as well as the damage associated with the ageing process.

3. It Plays an Important Role in the Metabolism of Energy

A lack of Coenzyme Q10 can affect the production of ATP because coenzyme Q10 plays an important part in the electron transfer process in aerobic cellular respiration. This is where cellular energy in the form of ATP (adenosine triphosphate) is synthesized.

If there are insufficient levels of ATP, the metabolism of the cells will suffer. Symptoms of this can include fibromyalgia, chronic fatigue syndrome, and even heart problems.

4. It Increases Oxygen Flow to the Scalp

A sufficient supply of oxygen is required to formulate cellular energy in the structure of ATP and a lack of oxygen in the scalp area can weaken the hair follicles.

One member of the hair loss forum Hairsite.com shared a hair restoration success story. It involved his elderly parents, both in their eighties. For a period of two months, they had each been taking a 400mg supplement of coenzyme Q10 (frequency unspecified). He reported that after that, both his parents began to grow dark hair.

His mother’s hair had previously been thinning and was completely white in color. His father, on the other hand, had developed male-pattern hair loss. At age 30 he had developed a bald spot at the top of his head, which had kept on increasing. After the CoQ10 supplementation, his mother began to grow dark hair all over her head and his father began to grow dark hair over his bald spot.

The person reporting this story, aged 51, also shared his own results with using coenzyme Q10. He stated that he had been taking 100mg for two months and had noticed accelerated hair growth and thicker eyebrows.

Glynis Barber, a 59-year-old British actress, has been widely acknowledged for her youthful looks, including glowing skin and a healthy head of hair. Many people comment these make her look 20 years younger than her actual age.

In a Daily Mail Online interview, she described her daily health regimen (6). She attributes her intake of CoQ10, among other supplements and vitamins, as one of the contributing factors to her youthful appearance.

Side Effects and Contraindications

CoQ10 is a naturally occurring substance that is widely distributed throughout the human body. There are no significant side effects from supplementing with CoQ10, even at higher dosages.

A typical dosage for supplementation is around 100-300mg a day. If there are any side effects, they will typically be mild. The most common ones are nausea, diarrhea, and abdominal pain.

Even in far greater doses, the body tolerates CoQ10 well. In the 2000s, studies looked at the potential of Q10 as a treatment for Amyotrophic Lateral Sclerosis (ALS), a neurodegenerative disease for which there is no cure.

As part of that research, patients received Q10 in dosages up to 3000mg per day (7, 8) . Aside from the typical gastrointestinal symptoms, there were no other side effects.

The use of CoQ10 during the first trimester of pregnancy has not been studied. There is evidence, however, that CoQ10 is safe to use after the twenty-week mark. There is no evidence on breastfeeding mothers, so you should avoid supplementation if you’re breastfeeding.

CoQ10 can potentially interact with warfarin and statins. Before you begin CoQ10, it’s important to speak with your doctor about possible drug interactions.

We mentioned that Q10 is in the top four most popular supplements on the market. As such, it is ubiquitous in online as well as brick-and-mortar retailers, and sourcing it will not be a problem.

You will typically find it sold in capsules or soft gels, with potencies ranging from 10mg to 400mg. There are also bulk powder forms available. These will work out cheaper in the long run, but you will have to take the time and split the Q10 into individual soft gels yourself.

A typical dosage for supplementation is 100-200mg daily.

CoQ10 is available as a supplement, not a medication. The Food and Drug Administration has not approved it for the treatment of hair loss or any other conditions. As such, it is important to have realistic expectations.

It is unlikely that supplementation with Coenzyme Q10 alone will solve your hair loss problems. But if you’re lacking this essential coenzyme, then you may want to consider adding an oral supplement to your daily routine.

The use of CoQ10 may help boost keratin production. It can also help to metabolize energy, protect against free radical damage and even increase oxygen flow to the scalp.  When combined, these effects may have a measurable impact on hair growth.

Do you have questions about CoQ10? Have you used CoQ10 for hair growth? Please share your questions and experiences below.