New research has shown that sesame oil can be an effective way to speed up hair growth, and prevent hair loss. In a study with mice, sesame oil proved equal, if not more effective than minoxidil for re-growing hair.

But can sesame but used in our everyday life to protect us from pattern baldness and could it even be used to regrow areas of thin or receding hair?

In this article I’ll discuss the use of sesame oil for hair loss in everyday situations and review all scientific evidence on the topic.

At the end of the article you’ll learn about the simple ways I suggest you use sesame oil, both topically and internally to make the most of this amazing oil.

What Is Sesame Oil? 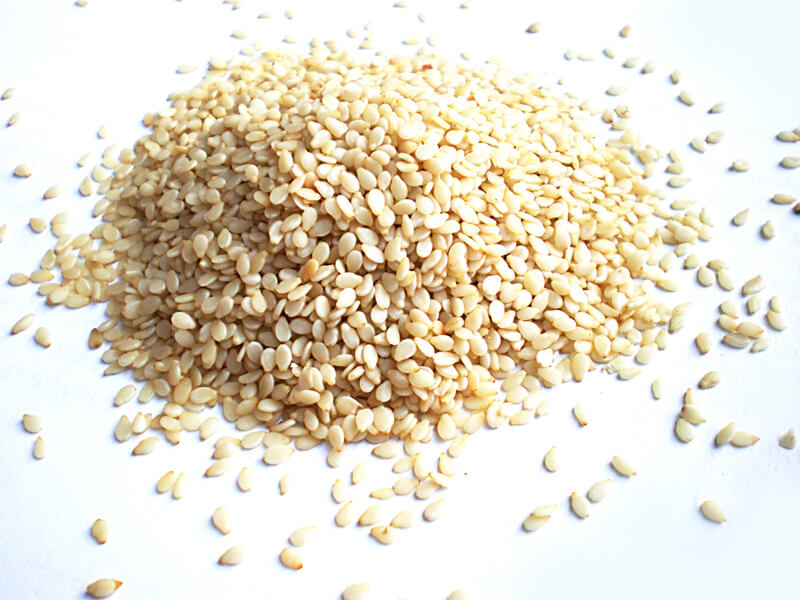 Extracted from the seeds found within the Sesamum Indicum plant, sesame oil is a rich source of essential fatty acids and antioxidants (1). This makes it popular for use in cooking, massage, and cosmetics.

This delicious oil, favored in the kitchen for its high smoke point and loved for its nutty flavor, has a number of uses beyond stir fries and noodles, including uses which are medicinal and therapeutic in nature.

For this reason, more and more people are coming to know about sesame oil’s various applications and provided benefits. This includes the use of sesame oil for hair growth.

Sesame Oil Around the World

A plant native to the African continent and Indian subcontinent, sesame seeds and their accompanying oil have been used extensively in the East.

From scalp and full body massage to oil pulling, Eastern medicine—a historical system of alternative treatment practiced in India—has utilized sesame seed oil and its many benefits for over 5000 years.

And, even though it tends to be higher in price than other vegetable oils, it is more commonly favored in the East due to its wide range of uses and applications.

Fun fact: Sesame oil is a highly stable oil and is also an oil with one of the longest shelf lives. This makes it highly desired throughout the world, for its use in the kitchen and out.

In the West, sesame is commonly used in seed form as a topping for buns and other confectioneries. However, just as in the East, the sesame plant’s oil is also commonly used in the cooking of foods which require high heat and is used more often than not in Asian cuisine throughout the Western hemisphere.

What are the General Health Benefits of Sesame Oil?

Since sesame oil has been revered for so many centuries, it’s obvious that there are a number of benefits associated with its use. The following list provides a basic summary of the health benefits linked to the use of sesame oil and the conditions it’s commonly used to treat.

Sesame oil has a number of properties which makes it a natural and effective anti-inflammatory.

In 2015, Anesthesiology and Pain Medicine published a clinical study in which 150 patients with upper or lower extremities trauma were separated into two groups of 75 (3).

At the end of the study, it was found that patients who received sesame oil applications and massage rated their pain lower than those who only received routine care, and they also required less use of NSAIDs to deal with accompanying pain and inflammation.

If you want to prevent further signs of aging, and even reverse cellular damage that has been done over time, then foods that are high in antioxidants should be on your priority list.

Sesame oil is a food source that is high in antioxidants, and studies have shown that it can be helpful in preventing aging, graying of hair, and even hair loss (4).

The nutrients and antioxidants found within sesame oil have been proven to protect the heart from damage (5). They may even be useful in preventing cardiovascular disease.

Move over coconut oil, because sesame oil is the latest and greatest when it comes to moisturizing and conditioning skin and hair. As a highly absorbent oil, sesame provides a fantastic cure for dry and cracked skin, and it can even be used as a preventative for dandruff.

Sesame oil is high in Vitamin E (and tocopherols), a vitamin commonly used to speed the process of healing and lighten the appearance of scars and pockmarks.

Exposure to the sun and its harmful UV rays can cause quite a lot of damage to your scalp and hair follicles. Properties found within sesame oil, however, have been shown to protect the scalp and hair from up to 30 percent of UV rays (8).

What Can Sesame Oil Can Do for People With Hair Loss?

While the benefits associated with sesame oil mentioned above are all well and good, what does all of this mean for hair loss sufferers, and how can sesame oil help to prevent further hair loss and even accelerate hair growth? 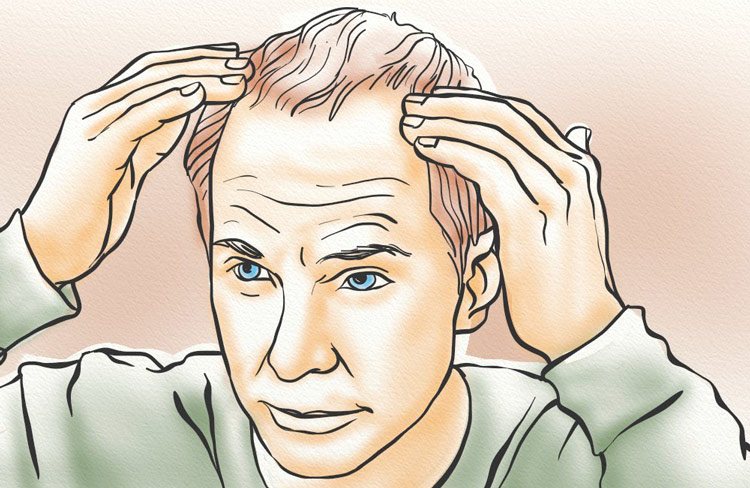 Well, for individuals who suffer from Androgenetic Alopecia (AGA), it’s long been known that dihydrotestosterone (DHT) is the hormone that’s most commonly associated with male pattern baldness.

There are a number of chemicals and compounds which have been effective in preventing the synthesis of DHT, and one such compound, which also happens to be found in sesame seed oil, are phytoestrogens and phytosterols.

DHT is synthesized from testosterone when a pesky little enzyme, known as 5-α-Reductase, comes into contact with it.

It’s been shown, however, that phytosterols, which can be found in sesame seed oil, canola oil, olive oil, and the like, have the ability to lower the amount of 5-α-Reductase in the liver by up to 44 percent and in the prostate by up to 33 percent (9).

This is great news for those with AGA, or who suffer from other problems related to production of DHT, such as benign prostatic hyperplasia (BPH).

What Does the Research Have to Say About Sesame Oil for Hair Growth?

You now know that the ingestion of sesame oil can help to decrease the amount of DHT being produced. But can sesame oil also be used externally to stimulate hair regrowth?

Researchers at Keimyung University had that very same question, and the results of their clinical research study were published in the Journal of Biomedical Research in 2010.

Minoxidil (Rogaine) is the most popular topical hair loss treatment in the world, and takes around 4 months to start working.

These applications were done once per day, six days per week.

Are There Any Side Effects To Sesame Oil Supplementation?

Overall, sesame seed oil is a safe and natural remedy that can be ingested or applied externally.

If you experience any of these reactions after ingesting or otherwise coming into contact with sesame, it’s important to seek medical attention right away.

If you’re someone with low blood pressure, it’s important to consult with your physician before using sesame seed oil, as it has been shown to reduce blood pressure levels (11).

How You Can Incorporate Sesame Oil Into Your Hair Care Routine?

Whether you’re looking to prevent hair loss, promote rapid regrowth, or you simply want to protect and strengthen the hair you’ve got, then the incorporation of sesame oil into your regular hair care routine is a must.

Fortunately, the application of sesame oil is quick and easy, which means adding sesame oil into your weekly hair care routine is simple.

Rubbing It Onto Your Scalp

This will increase blood circulation, as well as ensures that the oil is able to penetrate the skin.

After the application, leave the oil on your scalp overnight and rinse off in the morning.

This will ensure that your scalp has enough time to absorb the oil, and your scalp will be left with a protective and moisturizing layer that will provide you with numerous benefits (including sun protection and dandruff prevention) throughout the day.

Result times will vary, but doing this at least twice per week is recommended. Find out more about homemade topical minoxidil alternatives.

Take It As A Supplement

Taken orally, sesame seed oil can also help to lower the levels of DHT which contributes to the progression of hair loss
for those with AGA. There is no recommended dosage, however it is safe to consume in amounts which are naturally found in food sources.

You can easily substitute sesame oil for canola oil or olive oil in your cooking, or add a drop to salads, smoothies, soups, and more. Find out more about my best hair loss supplements here.

Make Your Own Sesame Oil Shampoo 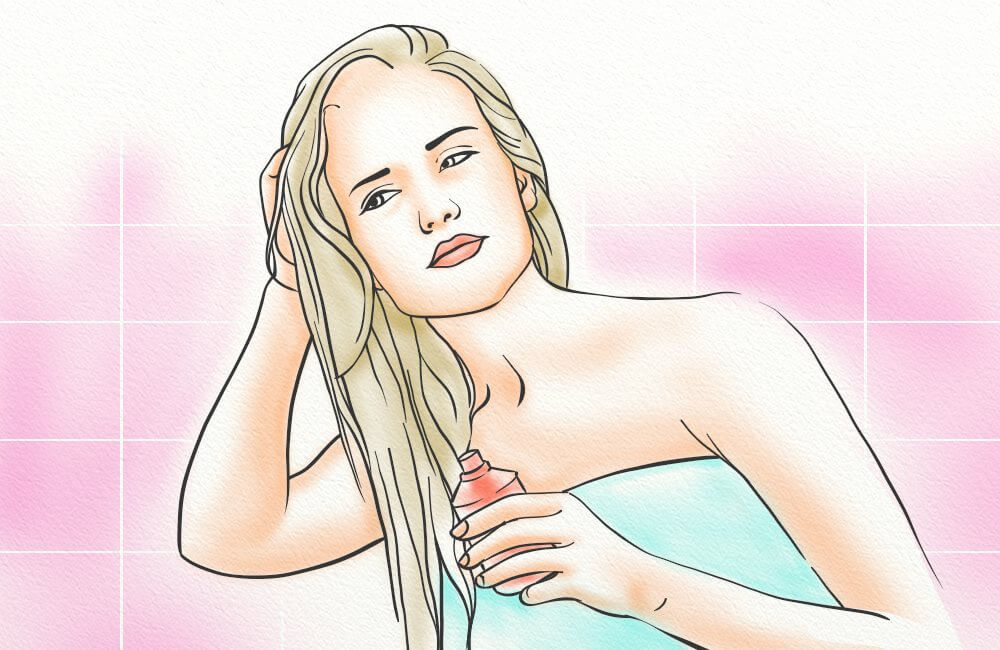 One great way to make the most of sesame’s amazing properties is to use it in your own homemade shampoo. I’ve written extensively about how homemade shampoos are much better for you if you’re worried about hair loss.

Mix all of the ingredients throughly in a small plastic container of your choice. Pour over wet hair and massage into the scalp for 2-3 minutes before rinsing out thoroughly.

The mixture should keep in the fridge for 2 weeks, and you can use it to wash your hair twice per week.

Benefits to your hair:

The carrot seed oil purifies, detoxifies and stimulates the scalp with its vitamin content and also has anti fungal properties (12).

The carrot also improves circulation and can stimulate hair growth. Maple syrup is soothing and nourishing, whilst also having antibacterial properties (13).

Is Sesame Seed Oil Right For You?

While the clinical research which is currently available is promising for individuals who suffer from male pattern baldness, more research is required to better understand how sesame seed oil can be used for hair growth and how it can be used for best results.

So, is it right for you? As sesame seed oil is a safe and natural supplement found in common food sources throughout the world, you should feel free to experiment with using sesame seed oil orally and externally.

Only you can determine whether the results are worth it, but it certainly doesn’t hurt to give it a try.