5-alpha-reductase (5AR) is an enzyme in the body that converts testosterone into DHT which then goes on to cause hair loss in men affected with androgenic alopecia.

By inhibiting the enzyme, you can slow down the production of DHT and thereby prevent hair loss. Here are the top three natural compounds that inhibit 5-alpha-reductase.

Reishi mushroom is one of the new kids on the block when it comes to DHT blockers. It is not as well known yet, but initial trials are promising as a 5-alpha-reductase inhibitor.

While not many studies have been performed on reishi, there is one that provides some promising insight into this natural inhibitor.

In 2005, Japanese researchers compared 19 species of mushrooms to determine their ability to inhibit 5AR. Of these 19 species, reishi was one of them.

The researchers prepared ethanol extracts of the different species and then added them to a suspension containing rat liver and prostate microsomes. The prostate is one place on the body where DHT is produced, with the help of testosterone and 5AR.

Once the mushroom species’ have been added to the suspensions, the researchers measured their inhibitory effects: 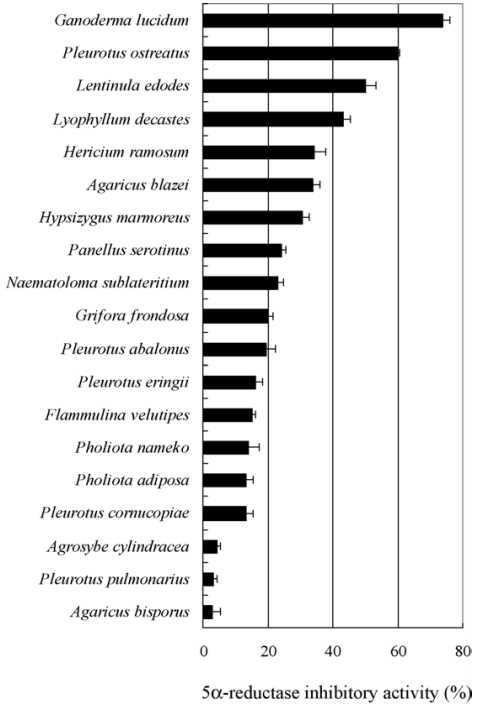 As seen above, reishi mushroom performed the best. It inhibited 5AR between 70% and 80%, which is quite impressive. After all, consider that the next species inhibited up to only 60%, and the numbers go down from there.

Even further, researchers wanted to see if reishi was also effective at reducing testosterone levels. A direct measure of this is prostate size.

Using rat prostates, the rats were split into three groups. The first was a control, while the other two contained different concentrations of reishi: 1.5 mg/kg and 15mg/kg: 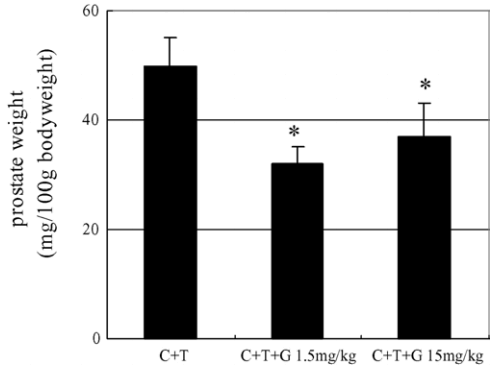 While the higher concentration of reishi was almost identical to the results of the control, the lower concentration (1.5mg/kg) significantly lowered the weight of the prostate.

It is well known that testosterone and 5AR play a key role in AGA. More specially, it is the androgen (DHT) produced from the interaction between them. This leads to hair follicle miniaturization and, if left untreated, irreversible baldness.

By inhibiting the levels of 5AR, you reduce the levels of DHT as a result. This can combat miniaturization and hair loss, all without the negative effects of DHT blockers.

Even better? Reishi has also been shown to benefit the immune system.

This is great news for everyone, but especially those who suffer from immune-related hair loss (such as Alopecia Areata). 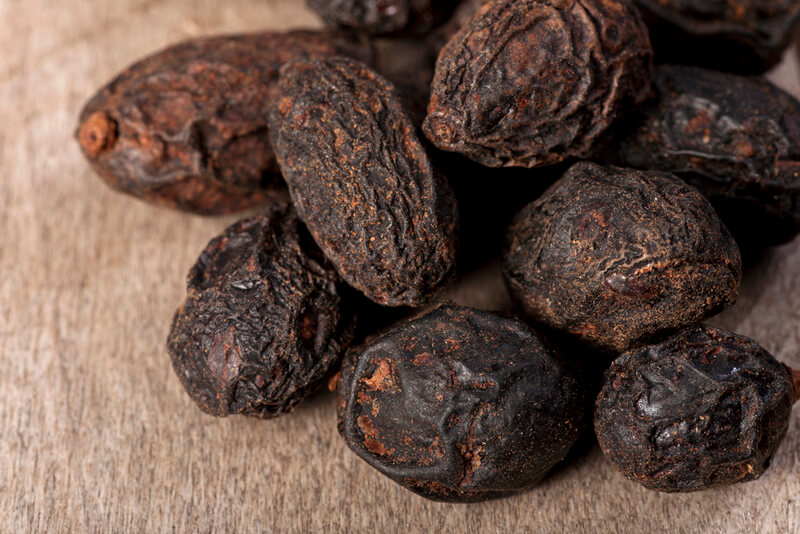 Saw palmetto is probably the most well-known and also controversial 5AR inhibitor, due to the variation in results and side effects associated with high oral dosages.

Unfortunately, this is because most men take saw palmetto orally. Oral ingestion is the least effective way you can benefit from saw palmetto’s inhibitory effect on 5-alpha-reductase because it is diluted throughout the entire body. A more effective method is to apply the soft gel capsules topically to the affected areas of the scalp.

While further research is needed to best understand this plant-derived treatment option, one study does show that a combination of gelatin-cystine and saw palmetto was effective in reducing free radical levels and inducing hair growth.

This study followed 48 volunteers (24 male and 24 female) as they applied the lotion (either active or placebo) over 50 weeks. Some participants (12) also took an oral supplement (which did not contain saw palmetto). All patients were previously diagnosed with AGA, and they ranged anywhere from a stage III to IV on the Norwood-Hamilton scale:

The lotion was applied twice per day (8AM and 8PM) and the participants were also given a mild shampoo and were instructed to use it throughout the length of the study.

For the hair growth portion of the study, the mean percentage variation of hair number per squared centimeter of scalp was taken.

Here is a look at the results:

Does this mean that saw palmetto is an effective treatment for AGA hair loss? Possibly.

Since the study was performed to test both saw palmetto and gelatin-cystine, there is no way to say which of the two worked best.

Additionally, we do know of saw palmetto’s various other health benefits. For example, it has been shown to be anti-inflammatory and contains antioxidant properties.

Green tea has been consumed for centuries, and it is even been used in a wide variety of therapeutic and cosmetic products. This is because it has an array of beneficial components (including antioxidants such as EGCG) which make it an effective natural ingredient.

One way in which green tea can be used that you may not know about is to inhibit 5-alpha-reductase.

In 2007, researchers from Seoul National University Hospital in South Korea found that a particular polyphenol – EGCG – may be responsible for its antioxidant properties.It may also play a significant role in human hair growth by inhibiting 5AR.

To test this theory, researchers extracted hair follicles from scalp tissue specimens supplied by five, healthy men. The follicles were dissected and were then cut into small pieces (about 2.5mm, including the Dermal Papilla). The pieces were stored in well dishes containing 10 ng/ml hydrocortisone, 10mg/ml insulin, 2 mm L-glutamine, 100µg/ml streptomycin, and 100 U/ml penicillin.

The EGCG was shown to clear increase the number of Dermal Papilla Cells (DPCs) present within each specimen, with an increase in cells as more EGCG was introduced.

Even further, the researchers applied EGCG directly to the scalps of healthy men.

When the DPCs were extracted from the scalps, the levels of phosphorylated Erk (P-Erk) was three times what it was in the control group.

What does this have to do with hair growth? The ERK pathway is directly involved in the proliferation of DPCs (and it also modulates 5-alpha-reductase), so an increased presence means increased potential for hair growth.

While further studies need to be conducted, it is clear that green tea (and its main compound, EGCG) can play a beneficial role in hair health and growth.

Propecia is a popular prescription drug used to treat male-pattern baldness. It is not the only substance that can slow the production of DHT, though.

As highlighted above, there are many naturally-occurring ingredients that can be used with similar results as Propecia. You can even use them topically which may reduce the side effects so commonly associated with Propecia.