There has been a lot of chatter about using green tea to reduce hair loss and as a potential DHT blocker. This article will review the scientific evidence to see if you should be adding green tea to your daily supplement list.

What is Green Tea?

The tea we all drink comes from a plant called Camellia sinensis. This plant is cultivated in tropical and subtropical regions with substantial rainfall.

The various varieties of drinking tea like green, black or yellow, all come from the same plant. The difference in color is due to the different ways of processing the leaves.

After they are harvested, the tea leaves can be either fermented, semi-fermented, or non-fermented. Green tea comes from non-fermented leaves, while black tea from fully fermented leaves. Due to the lack of fermentation, green tea retains most of its nutrients. This, in turn, explains why it is by far the most popular medicinal tea.

Green tea’s use in folk medicine goes back millennia. As of this date, nearly 6,000 academic publications have investigated its health benefits (2).

The health benefits of green tea are due to its high concentration of catechin polyphenols (1). Polyphenols are a class of plant compounds that researchers have investigated as possible treatments for a wide range of health conditions.

The most plentiful polyphenol in green tea is EGCG (epigallocatechin-3-gallate). Other polyphenols in green tea include ECG, EC, and EGC.  These are powerful antioxidants that have also been researched for other possible health benefits, like lowering cholesterol and possibly preventing certain tumors.

Aside from catechins, other compounds in green tea with possible health benefits include caffeine, organic acids, protein, chlorophyll, and theanine.

Unsurprisingly, consumers use green tea for a very wide range of reasons. Some of the most common ones include (3) :

Its use as a weight-loss supplement is arguably its most popular application nowadays. Increasingly, however, men with hair loss are also turning to green tea as a treatment. Let’s see why this is so. 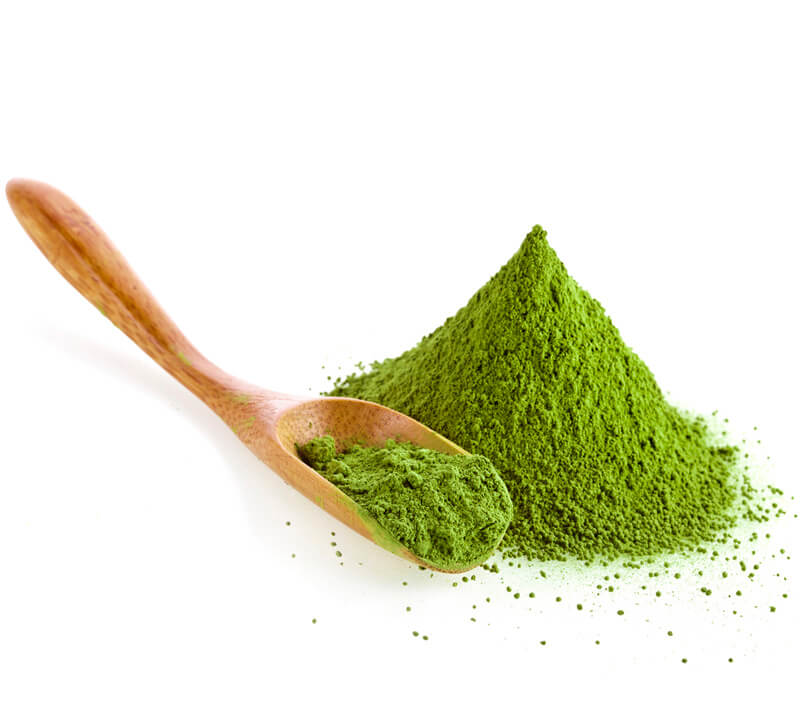 In recent years, green tea has become one of the most popular natural treatments for hair loss. More and more hair loss products include green tea in their active ingredients, and an ever-larger number of people are supplementing with green tea (we will see how below).

Some ways in which green tea may contribute to hair regrowth and prevention of hair loss are:

There are some studies that seem to back these claims, though no direct clinical studies on balding men. Let’s have a closer look at the research.

Here is a look at a few studies which highlight the possible benefits of green tea as it relates to hair loss.

A 2005 study tested the effects of drinking green tea (and more specifically, its polyphenic compounds) on hair growth in mice (8).

The mice recruited for the study were all female, and all had suffered spontaneous hair loss on the head, neck, and dorsal regions. The scientists split them into two groups:

Otherwise, both groups of mice were fed the same diet and lived in similar environments.

After 6 months of treatment,  33% of mice in Group A had significant hair growth. Group B, the control group, had no hair growth whatsoever.

A 2007 study looked at the hair-growth effects of EGCG on human hair follicle cells (9). The researchers removed scalp specimens from healthy male volunteers. From these, they then cultured hair follicles and measured the proliferation of Dermal Papilla Cells (DPCs). These are a group of cells in the hair follicle that are critical to the regulation of the hair growth cycle, and ultimate hair length.

The researchers also found some evidence that EGCG may promote the anagen growth phase.

While these results are very encouraging, it is important to note they were performed in vitro (in a petri dish), not with live human participants. Furthermore, the cells were derived from healthy rather than balding men.

Dihydrotestosterone is a sex steroid and androgen hormone (10). Our body naturally synthesizes it from testosterone in various tissues.

The enzyme responsible for the conversion of testosterone to DHT is 5-alpha reductase. There are two slightly different versions of this enzyme, simply called type 1 and type 2.

DHT is the main culprit in pattern hair loss (androgenetic alopecia). Under the influence of DHT, the hair follicles literally shrink in size over time. In the end, the follicles disappear completely. Scientists call this process hair follicle miniaturization.

A study in 1995 determined that the major constituents of green do indeed inhibit the 5-alpha reductase enzyme (11).

The researchers used cell cultures and found that the ingredients in green tea extra effectively inhibited the type 1 enzyme, but not the type 2. While the results of this study are encouraging, the type 2 enzyme is primarily responsible for hair loss.

To enjoy the hair-growth benefits of green tea you have two options:

We will first look at the oral route. 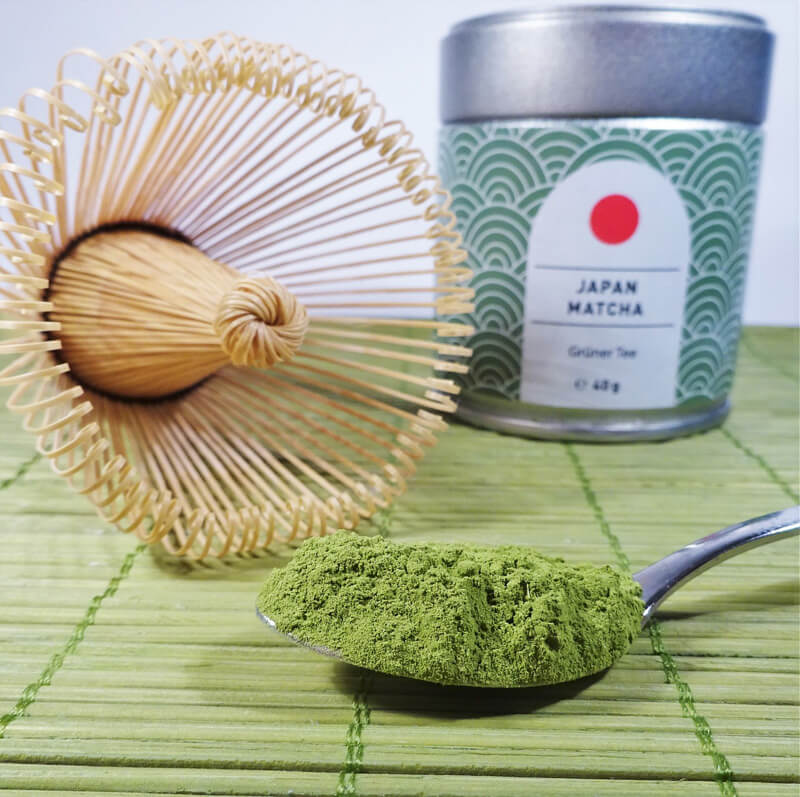 In order to get the daily recommended dose of 250 mg of catechins, you would need three to five cups of green tea per day.

Fortunately, you can purchase ready-made green tea extracts. Retailers sell these in the form of capsules, with potency ranging from 200mg to 1000mg or more. You can also purchase the extract in powder form.

As we will see, you should not take these supplements on an empty stomach, because there is some concern over liver injury (hepatotoxicity) (12).

In order to get real, measurable benefits from green tea, you will need to use it consistently and daily. It is recommended that you use it at least twice daily, in some form. 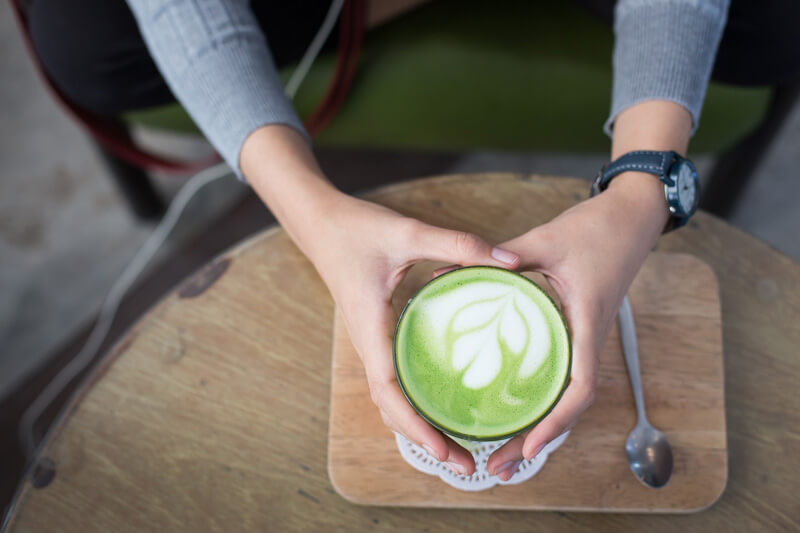 There does not seem to be an established recommended amount for hair growth. Having said that, three to five cups of tea per day are considered safe for most adults without underlying liver problems.

If you do have liver issues you should speak to your physician before using green tea for hair regrowth. A high dosage is  10-29 milligrams of green tea extract per kilogram of body weight per day.

Brewing the tea leaves is the most common way of consuming them.

Brewing time depends on the quality of the leaves. If you use high-quality leaves, you can seep them in water that is less hot (about 69 degrees Celsius, 160 degrees Fahrenheit), for about 30 seconds.

If you are using “spent” leaves (lower quality), the brewing time needs to be a bit longer: two to three minutes, at 87 degrees Celsius, which is 190 degrees Fahrenheit.

Some people drink a more concentrated version of green tea: matcha tea. Matcha tea is essentially finely powdered green tea leaves. Since the leaves are powdered down they can be drunk. Drinking the tea leaves gives you higher doses of EGCG, and is closer to taking the extract as a supplement.

The caveat to drinking matcha tea is you may get higher concentrations of caffeine and heavy metal contaminants like lead or arsenic. Consequently, it is important to drink high-quality matcha that is carefully sourced and free of heavy metals.

Most people consume around 1-2 servings of matcha a day. This is equivalent to around 10 to 20 cups of regular green tea.

In addition to (or instead of) oral supplementation, you can also apply green tea topically. There are various ways to do this:

To rinse your hair, brew a cup of green tea as you normally would. You can use several tea bags. Allow for the tea to cool off. After you shampoo and condition, slowly pour the green tea over your head. You can also lower your head into the teapot, and allow it to soak for a few minutes.

After you are done, rinse off your head with tap water.

Adding It to Your Shampoo

Perhaps the easiest way to enjoy the hair-growth properties of green tea is by adding some green tea extract to your shampoo.

Another way is simply by diluting your shampoo in green tea that you have brewed as normally. Most commercial shampoos are much more concentrated than is necessary, so you can use green tea instead of regular water for diluting them. 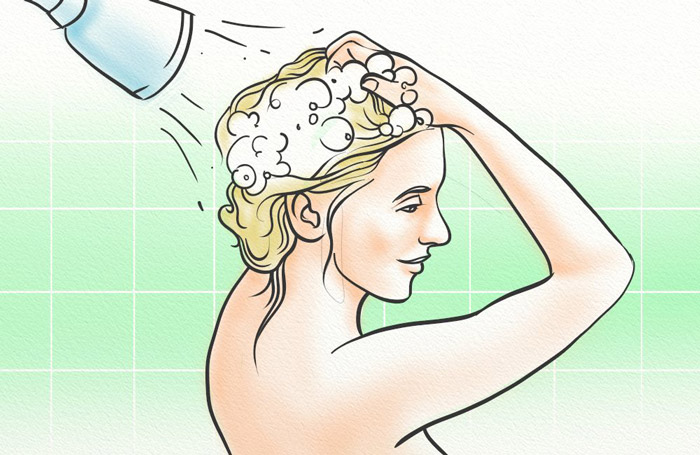 Nowadays, the list of commercial hair products that contain green tea is practically endless. You can find green tea as the main active ingredient (or listed among others) in:

You can use these products either on their own or in combination with one of the other treatment routes.

Are There Any Side Effects?

There have been no reported cases of toxicity from people who drink green tea. Toxicity can occur when using green tea extract, though. As we saw, green tea leaves contain polyphenols, and particularly EGCG (13).

EGCG is a naturally occurring and relatively harmless compound that would not cause any problems if you were just drinking the tea. Green tea in extract form, however, will contain a much higher concentration.

In some cases, high doses of EGCG can lead to liver damage and aggravate any existing liver problems (14). As such, you should take green tea extract with food and never on an empty stomach.

If you are using green tea extract and develop any symptoms associated with liver damage, discontinue using it and see your doctor. These symptoms might be:

Another thing to bear in mind is that if you drink large amounts of green tea you are likely to stain your teeth. Two easy ways to reduce the staining are sipping the tea through a straw and brushing your teeth immediately afterward. 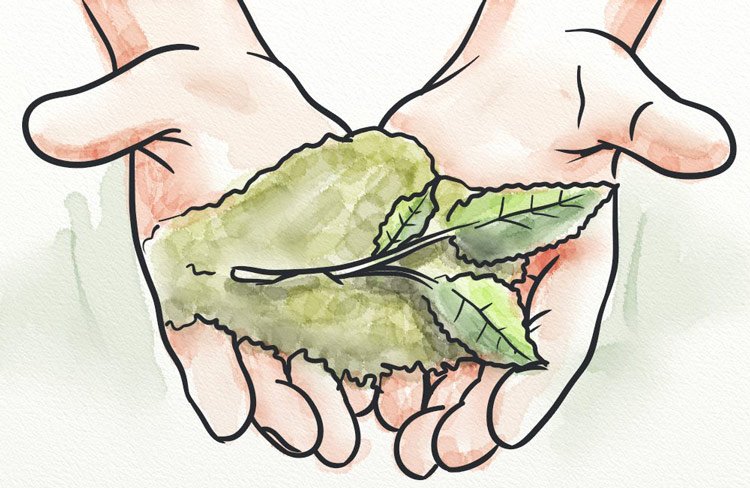 Green tea is a safe, affordable, and easily accessible treatment. You can start using it as part of your hair care routine immediately, regardless of which part of the world you live in.

Having said that, the scientific evidence for its efficacy against hair loss is all indirect. To date, there has been no clinical research on balding men (or women) who used green tea for their hair loss.

As such, it is important to start treatment with reasonable expectations. It is best to start using green tea for its overall health benefits and keep an open mind as to the possibility of growing new hair.

If after three or four months, you see no results, you can determine if the other health benefits of green tea justify its continued use.