Caffeine and Hair Loss: 3 Ways To Use it for Thicker Hair Growth

Caffeine is almost everywhere these days. From coffees and sports drinks to countless health care products. Men are also increasingly using it to treat their pattern hair loss. Does science support this trend?

This article will explore the science and scrutinize the link between caffeine and hair growth. After reading, you will know how and why to use caffeine to your advantage. This will allow you to achieve thicker, stronger hair.

Caffeine is a bitter, white crystalline chemical. It belongs to a group of naturally occurring alkaloids of the methylxanthine class. It is naturally found in coffee, tea, kola nuts, and cacao beans.

From a physiological point of view, it is a stimulant (1). It excites the central nervous system, reducing drowsiness and fatigue. It is legal in all countries and its use is socially acceptable. This makes it is the most popular psychoactive substance in the world.

Caffeine is an active ingredient in both prescription and over-the-counter medicines to treat drowsiness. It also works well alongside pain relievers (2).

Drinking Your Way to Thicker Hair?

Firstly, we must clarify that caffeine can only benefit your hair with local application (3). You cannot drink your way to thicker hair by upping your coffee intake.

The problem is the massive quantity of coffee required to achieve the necessary caffeine concentration in your follicles. Researchers estimate you would have to drink around 60 cups of coffee to accomplish this.

Clearly, that is not possible. It would jeopardize your health, particularly your nervous and cardiovascular systems. You would be hospitalized with heart problems well before you could drink that much coffee (4).

Topical application is entirely different. The user applies the caffeine to the scalp, absorption is local and only small traces reach the blood supply. This allows one to enjoy the hair-growing benefits of caffeine without systemic side effects.

Caffeine and Your Hair: The Science

We will look first at the basic science of caffeine and hair growth. In the next section, we will see the published clinical research with balding men.

In an in-vitro study, researchers cultivated scalp biopsies from patients suffering from AGA (5). The 14 men in the study ranged from 20 to 45. They had hair loss between stages III and IV on the Norwood-Hamilton scale.

After 120 hours, the caffeine-treated hair follicles grew longer hairs compared to the control. Depending on the caffeine concentration, they were between 33% to 39% longer. 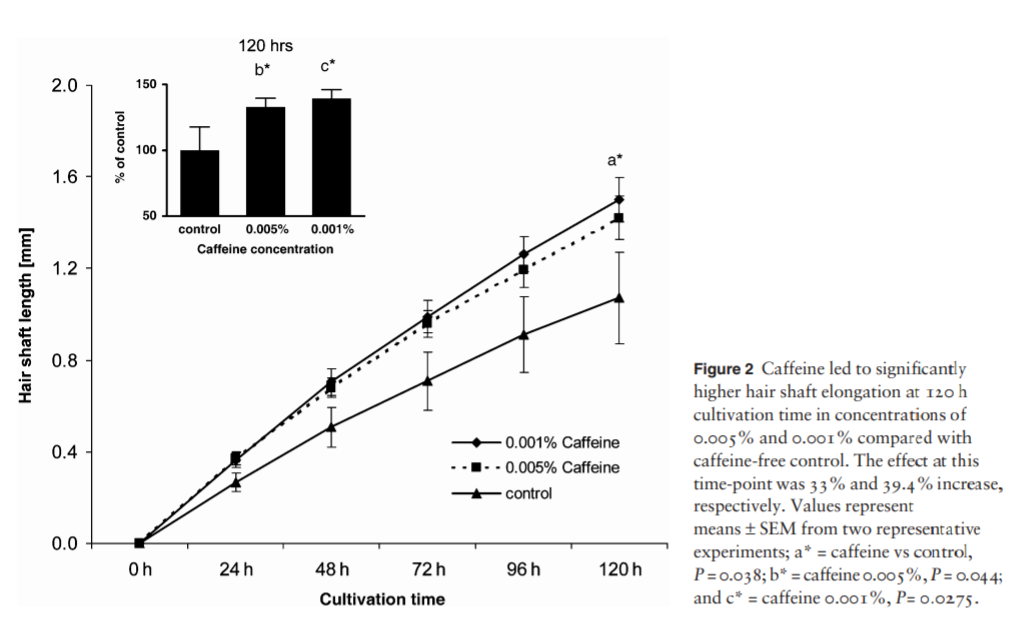 In a second experiment, the researchers studied if caffeine can reverse the effects of testosterone on hair growth. Testosterone inhibits hair growth in vitro.

The hair follicles were split into the following groups:

A follow-up study confirmed and expanded on these results (6).

The above results were in Petri dishes in the lab. In this environment, there is no challenge in subjecting the follicles to caffeine. The real-life application of topical caffeine is a different matter altogether. On paper, there is no guarantee that topical caffeine can actually penetrate the hair follicles and stimulate their growth.

Researchers from Berlin and Uzbekistan sought to answer this question. They recruited six healthy men to take part in their study (7).

The researchers applied shampoo with caffeine in two separate experiments. These took place one week apart.

The shampoo was washed away after two minutes. Blood samples were taken at the start of the experiment and at various time points after that, to a maximum of 72 hours.

In the first group (follicles unblocked), caffeine could be detected in the blood as early as five minutes post-application.

In the second group, caffeine levels were detectable much later, after 30 minutes. The best explanation for this was that the inability to permeate the follicles slowed caffeine’s absorption. Its only way in was through the skin, and this absorption route was much slower. 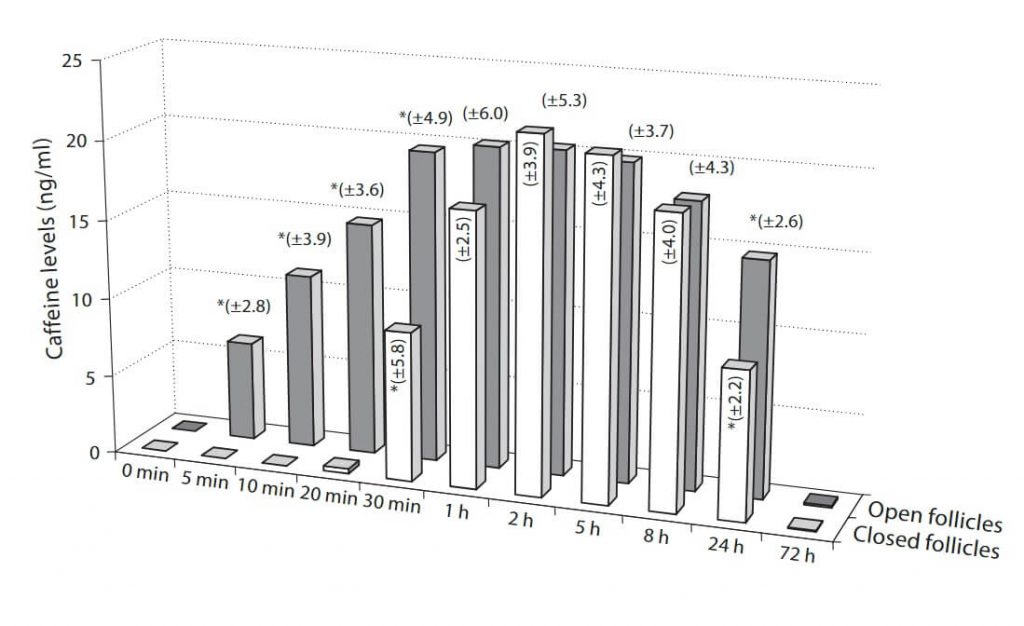 These results suggest that the primary method of absorption of caffeine is through the follicles. This is an excellent property for a topical hair loss treatment.

The above results are very promising. They suggest that caffeine a) promotes hair growth and b) is absorbed through the follicle.

Yet what matters most are real-life results with balding men. In this section, we examine the published clinical research.

One of the first studies with balding men was in Italy. A group of forty men used a caffeine-containing-lotion for 4 months (8).

After 4 months, the percentage of patients with improvement in their hair loss was 83%. This percentage was determined by the hair pull test. In this test, the researcher gently pulls a strand of hair and counts the number of hairs that fall off.  The results of the hair pull test matched the men’s subjective assessments. When asked, 80% of participants reported noting a reduction in the intensity of their hair loss.

This same team of researchers had previously found similar results with a slightly smaller sample of 30 men (9) In that study, 70% of the men using a caffeine shampoo for 6 months showed a reduction in hair loss as per the hair pull test.

In 2017, an international team of researchers published the first Randomized Clinical Trial (CRT) of caffeine for hair loss (10). RCTs are considered the “gold standard of clinical research” and their results carry special weight (11).

This RCT directly compared the efficacy of a caffeine-containing topical liquid to minoxidil 5% solution (Rogaine). Minoxidil is an established, FDA-approved agent for hair growth (though results are typically not impressive) (12).

A total of 210 men with male pattern baldness were randomly assigned to either the caffeine solution or Rogaine. Their average age was 31 years. They were recruited across five different medical facilities in India.

Subjects in the caffeine group applied the caffeine solution twice daily. Those in the Rogaine group also applied it twice daily. At the start of the study and 6 months later (when treatment concluded), the researchers measured the percentage of hairs in the anagen, or growth phase. They also assessed the men’s own subjective perceptions of the treatment efficacy, as well the professional opinion of their treating dermatologists.

The results: after 6 months, men in both the Rogaine and caffeine-treated groups showed gains, and these were similar. The men in the Rogaine group had an average 11.7% increase in their percentage of anagen hairs. This compared to 10.6% for the caffeine group.

This difference was not statistically significant. Men in both groups reported significant improvements in the degree of hair loss and hair thickness. These differences were also similar across both groups.

The treating dermatologists in both groups assessed the treatments to be working equally well. After the 6 months, the dermatologists of 98% of subjects in the caffeine group recommended they continue the treatment, compared to 100% in the Rogaine group. 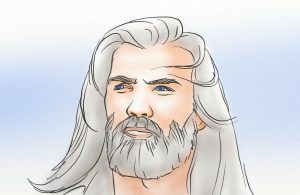 A Treatment for Life

At the conclusion of the paper, the study authors make an interesting point:

As well as the fact that genetically predisposed hair loss can hardly be classified as a hair disease, its treatment with drugs might be of concern when taking risk/benefit profiles into account. Such ethical considerations become even more important when the treatment is applied or administered daily for the rest of the subject’s life and has to be done lifelong and not just only within a shorter therapy period. Well-tolerated ingredients are prerequisites for safe treatment against hereditary alopecia, and the caffeine solution assessed in this study seemed to meet this requirement.

The results of hair loss treatments only last as long as the treatments themselves. As soon as a man stops treatment, any new hairs he has regrown will fall out. This typically happens within 3-4 months after treatment cessation. This applies to pharmaceutical treatments like minoxidil and finasteride, as well as to plant-derived ingredients like caffeine.

Given a) the equivalence of caffeine with a pharmaceutical like minoxidil and b) the need for lifelong treatment, we can see why the researchers recommended caffeine as an excellent treatment option for men with pattern hair loss.

There is no shortage of caffeine shampoos on the market today. Consumers can have a hard time deciding which to purchase.

The problem with these products is usually what is in the bottle apart from caffeine. Balding men often turn to caffeine-containing shampoos as a natural alternative to medicated shampoos and prescription medications. Yet most of these shampoos are laden with harsh chemicals like sulfates, preservatives, and additives.

Many of these substances, like Sodium Lauryl Sulfate and Sodium Laureth Sulfate, are used in household cleaners and industrial detergents. They make for an easy-to-use shampoo with rich foam, but the price is potential irritation from ingredients with no benefit to hair growth.

Having said that, there are some all-natural caffeine shampoo options. The Hairguard Caffeine Shampoo, for example, contains all-natural ingredients. There are also no harsh chemicals in the bottle. Instead of aiming for the richest lather or nicest smell, products like this have an all-natural formulation, with ingredients that promote hair health.

You can dry and infuse coffee grounds into the oil.  You then rub these on the scalp either directly or by mixing with a ready-made shampoo.

What About that Third Latte?

We saw earlier the prohibitive amounts of coffee drinks necessary to achieve therapeutic levels in the follicles.

A good question is if there are any hair benefits whatsoever to moderate consumption of coffee. For example two or three cups a day.

The answer is no. Moderate or even heavy consumption of coffee has no effect on hair growth, be it positive or negative. This means hair should not factor into how much coffee you decide to consume.

There is strong evidence supporting the use of topical caffeine as a hair growth stimulant. Caffeine promotes hair growth in vitro, and the follicles are the primary route of absorption.

In line with this, clinical studies find it to be effective in combatting male pattern hair loss and regrowing hair. The regrowth is probably comparable to minoxidil.

Caffeine is a natural, plant-derived molecule. Side effects from a topical application are minimal. As such, it will be especially appealing to those balding men seeking natural, non-pharmaceutical treatments.