The Best Vitamins That Can Block DHT

Before we get in to the best vitamins that block DHT, you should probably be aware that high levels of DHT are not the only cause of hair loss.

In fact, there is something even more important to preventing hair loss, and that’s DHT sensitivity.

See, people who suffer from hair loss don’t have abnormally high levels of DHT, it’s just their hair follicles (and the dermal papilla) are more sensitive to DHT than those who don’t suffer from it.

For that reason, I’ve included in this list all the vitamins that decrease DHT sensitivity, as well as blocking it.

Some vitamins work directly, some promote overall good health that can then lead to lower DHT sensitivity, but both will be discussed here.

I’ve also included a few minerals to the list that can help block DHT as well.

If you prefer watching rather than reading then check out our video below:

Niacin (vitamin B3) is an essential human nutrient, and one which can be found in high quantities in a variety of foods. Its main claim to fame when it comes to fighting hair loss is its ability to increase blood circulation in the scalp.

There are many hair loss causes, but a major factor in your hair’s health is its access to a continuous blood flow.

When blood flow is restricted, it can lead to brittle hair which easily breaks. This can also compound the effects of DHT, as no blood flow means there’s no way for chemicals (including DHT) to be removed from the follicle).

And did you know that men with early Male-Pattern Baldness (MPB) had subcutaneous blood flow that was 2.6 times less than their healthy counterparts?

All of this to say, blood flow is critical to hair health and niacin can help. How?

A common side effect of niacin supplementation is flushing. This occurs because niacin is known to dilate the blood vessels, and this increases blood flow to the face. Niacin can even reduce the viscosity of blood, so it flows more easily through your body!

So, how can you get more niacin into your diet? Include these foods:

You can also take a daily niacin supplement, but it’s best to speak with your doctor before doing so.

Biotin, also known as vitamin B7, plays a major role in the metabolism of food. It’s also been shown to be a major component of the hair, skin, and nails, as biotin functions as a protein synthesizer. As keratin is the protein found within the mentioned three structures, it makes sense that the presence of biotin is important.

Are you still unsure of biotin’s role in hair health? Let’s take a look at the effects of biotin deficiency.

Biotin is found in abundance in the foods we eat, and it can even be produced by healthy guy flora. And even with biotin deficiency being rare, researchers have been able to study its effects.

To name just a few of the symptoms of biotin deficiency, they are:

So, how can you be sure you’re getting an appropriate amount of biotin in your diet? Include foods such as:

You can even find biotin in a variety of multivitamins, especially those aimed at hair, nail, and skin health.

Zinc and selenium are two trace elements that are often discussed together, and for good reason. They’re often found together in many cosmetic formulations (such as face wash), and both play a critical role in the human body.

As antioxidants, zinc and selenium are vital in the fight against free radicals. They protect the skin (and other organs) from aging, and keep many cellular processes functioning properly as a result.

Interestingly, both zinc and selenium also play a role in the keratinization process.

As outlined above, keratin is a protein. In fact, it’s the main protein found within hair.

However, proteins aren’t just naturally present within the body. Instead, they must be synthesized. This is done through various processes, and protein synthesizers such as zinc and selenium help to make this happen.

It’s not actually necessary to take these vitamins daily, as an overabundance of zinc can lead to thinning and hair loss. Though, you should speak with your doctor about your nutrient levels, and they can prescribe a course of action if it’s found that you have a zinc or selenium deficiency.

A better course of action is to ingest foods rich in these vitamins. These include:

You can easily add many of these ingredients to a delicious smoothie, or make a bone broth that will satisfy your hunger and nutritional needs.

As a major regulator of biochemical processes within the body, magnesium is a crucial nutrient. It’s also been shown to play an important role in hair health and growth.

Magnesium is sometimes linked to calcium, and here’s why: magnesium is often used to ‘regulate’ calcium’s presence.

But calcium is good for you, so why would you want to limit it?

This is because too much free calcium within the body can lead to calcium deposits. In people with hair loss, this can even lead to calcification of the scalp. If not treated, this can lead to fibrosis of the tissues, which results in irreversible baldness.

Calcium is found in many foods, and you may even be getting an oversupply of it from your own water supply!

This is why I recommend applying magnesium oil to your scalp daily, whether by itself or mixed with other oils (such as peppermint and rosemary).

You can even take a magnesium supplement if you’re deficient, though it doesn’t need to be taken daily. You should speak with your doctor if you suspect deficiency, as well as to find the best treatment plan for you.

Antioxidants play a vital role within the body by ridding it of free radicals. These are molecules which essentially break down the body over time, as they steal electrons from surrounding molecules. Perhaps one of the best known antioxidants is Vitamin E, and here’s why.

Vitamin E is actually a generic name for a group of compounds that are known for their antioxidant properties. This group can be further broken down into two: tocopherols, and tocotrienols.

Tocotrienols in particular have been proven beneficial for hair growth, and just eight months of supplementation led to a 34.5% hair count increase in the studied area!

Vitamin E, especially tocotrienols, is found in a few common foods. These include:

You can also take vitamin E as a supplement everyday, but it’s better to look for foods that have high quantities of it. These are absorbed more readily by the body. 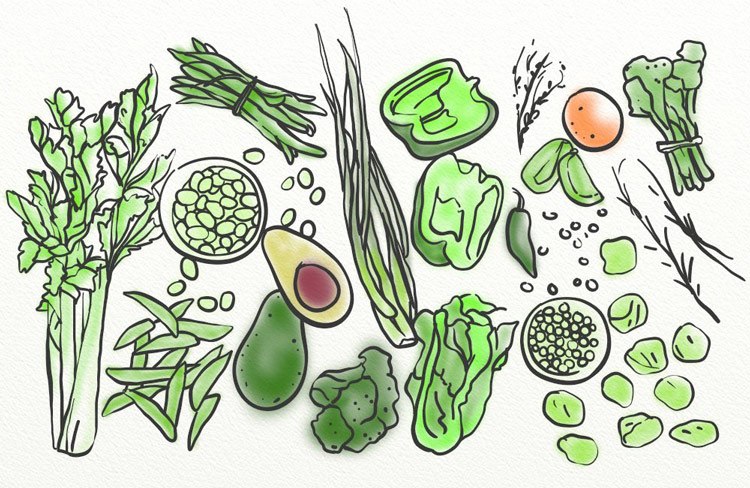 Folic acid, also known as Vitamin B9, is commonly associated with prenatal vitamins. However, folic acid is an important nutrient even for men and non-pregnant women.

Folic acid and folate are often confused, but folic acid is the synthetic (i.e. created in a lab) form of folate. On the other hand, folate is naturally found in foods and is much better absorbed by the body. That’s not to say that folic acid cannot be used though, as it’s methylated in the liver and then able to be used throughout the body.

But what role does folate, and as a result, folic acid play?

Namely, it synthesizes and repairs DNA (the cell’s genetic material) while also ensuring it functions as it should. This is important for a wide variety of biochemical processes, including hair growth.

It’s best to consume foods high in Vitamin B9, as the majority of this is folate (unless it was intentionally added, then it’s folic acid). Foods that have naturally high quantities of vitamin B9 include:

NOTE! It’s possible to have too-high levels of folate within the body, and this can increase the risk of cognitive decline. If you suspect you suffer from Vitamin B9 deficiency, or to learn more about the proper supplement dosage, consult with your doctor.

Although not strictly a vitamin or a mineral, this herb is well known in ayuverdic medicine and has anti-aging and anti-inflammatory properties.

While these properties alone can be beneficial in the treatment of hair loss, including AGA, it may also block DHT directly.

Bhringaraaja, known by its Latin names Eclipta alba and Eclipta prostrata, is one ingredient in a commonly used Chinese medication to treat AGA. It’s called BeauTop, and it’s been shown to block DHT and stimulate hair follicle activity.

While further research still needs to be performed, especially on Bhringaraaja alone, its other properties can make it a beneficial addition to your current hair care routine.