Fluocinonide for Hair Growth: Benefits, Side Effects, and Uses

In this article, I’ll explore using fluocinonide for a particular type of hair loss called alopecia areata. This will include:

You’ll also learn why fluocinonide is only useful for this one type of hair loss.

There are many kinds of hair loss. The most common is pattern hair loss, which will affect the majority of men and women in their lifetime.

Alopecia is a blanket term that literally means baldness.  Areata defines this boldness as affecting a circumscribed area or patch on the head.

Unlike the more common male pattern of baldness, the bald spots of alopecia areata can develop anywhere on the head, including the top, crown, and sides of the head.

The size of these bald spots varies. They can be tiny ones that are a few millimeters wide to massive ones that cover most of your head. You will sometimes hear alopecia areata referred to as “patchy hair loss.” 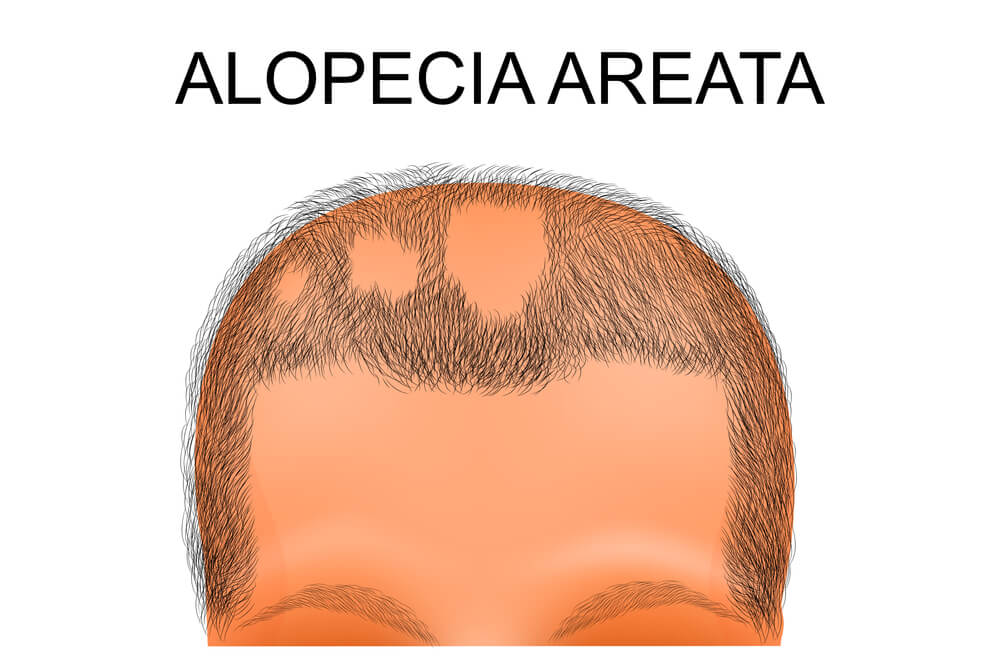 Two out of every one hundred people will develop alopecia areata at some point in their lives. It affects men and women, adults and children of all races. It tends to affect younger people more, with more than two-thirds of sufferers being under 30 years of age.

The Cause of Alopecia Areata

Scientists are not clear about what causes alopecia areata but believe it is probably an autoimmune condition (2).

For reasons that are not understood, the body’s immune cells attack the hair follicles, and primarily those that are in the anagen, or growth phase, of the hair cycle. The attack inflames the follicles and causes them to prematurely end their growth phase. 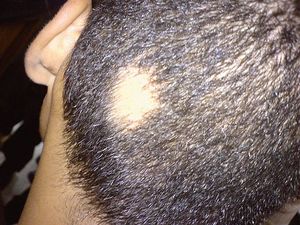 This process leaves the majority of follicles in the affected areas of the scalp in the regression and resting phases of their cycle. The end result is the visible bald patches.

The good news is that your hair follicles remain alive, no matter how long you have alopecia areata. This is not the case with pattern baldness, which is only partially reversible.

The FDA has not yet approved any medications to treat alopecia areata. As a result, doctors prescribe various medications off-label (3). One of these is fluocinonide.

Fluocinonide is a topical medication sold for the treatment of various skin conditions, including psoriasis, eczema, and seborrheic dermatitis (4, 5). You can find it in various forms like gel, cream, or ointment.

Fluocinonide has been on the market for many decades. The patent has now expired and there are many generic versions to choose from.

Application is typically between two to four times daily.

Fluocinonide is a very powerful medication that should only be used under strict medical supervision. It belongs to a group of drugs called corticosteroids.

Corticosteroids are hormones naturally produced in your body by your adrenal glands. They work by reducing inflammation and modulating your body’s immune response.

During a period of inflammation, the body’s white blood cells and other chemicals act to protect against infections and pathogens like bacteria and viruses.

Sometimes, your immune system doesn’t function properly, causing inflammation to work against the body’s tissues. Instead of repairing damage, this actually causes it. Inflammation is most noticeable when there is redness, pain, swelling, and warmth. Other types of inflammation can be ‘silent’, with no obvious symptoms.

Corticosteroids, whether natural or synthetically produced, reduce the production of inflammation-causing chemicals to help your body limit tissue damage. They also “power down” your immune system by affecting the way white blood cells work.

In summary, when your immune system is attacking your hair follicles, a corticosteroid can help to mute the intensity of the attack and alleviate symptoms. 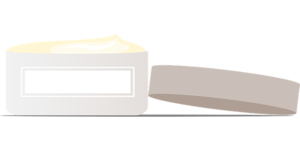 Topical corticosteroids are generally used to treat diseases of the skin such as psoriasis, eczema, and vitiligo (6). They have a powerful anti-inflammatory action and can help suppress the immune response in conditions with an auto-immune component.

Topical corticosteroids are considered the baseline treatment for this type of hair loss, due to the ease of application, low cost, and safety. In addition, alopecia areata often requires continual treatment to prevent relapse. This makes drugs that are affordable, easy to use, and safe over the long-term very attractive treatment options.

As we mentioned, the FDA has not approved any medication for alopecia areata. This means that if you want to use fluocinonide for your hair loss, your doctor will prescribe it for you off-label.

Application is often once or twice daily. A round of treatment will usually last several months.

Results You Can Expect

A study from the 1970s gives us the best estimates of fluocinonide’s efficacy against alopecia areata (7). The researchers recruited 28 patients with alopecia areata. The patients applied a cream containing 0.2% fluocinolone acetonide cream. This medicine is closely related to fluocinonide, with similar function and efficacy.

Compared to the placebo, the fluocinolone acetonide cream gave better overall results. Of the 28 patients, 17 showed what the researchers classed as favorable responses. Unfortunately, slightly over half of these patients (9/17) relapsed, either while still on treatment or within 3 months of stopping it.

In this respect, fluocinonide is similar to most other topical corticosteroids. Most patients will respond to treatment but to varying degrees. While sometimes the regrowth will be permanent, other times the alopecia will come back after treatment stops.

For this reason, medical professionals often refer to the “management” of alopecia areata (8). 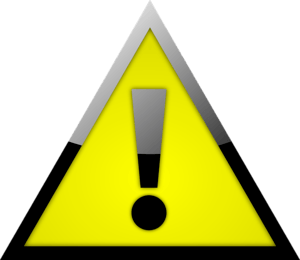 Cautions and Side Effects

As with any drug-centered treatment, proper medical supervision is necessary. Topical corticosteroids, if used improperly, can cause thinning of the skin, as well as a host of other skin problems. These can include spider veins, acne, and more.

Even if your doctor prescribes fluocinonide for your hair loss, keep an eye on any changes to the health of your scalp. Communicate these to your physician as soon as possible.

Other side effects of fluocinonide include blisters, peeling, rash, hypo- or hyper-pigmentation, swollen hair follicles, headache, and a stuffy nose.

When using any kind of medication for hair loss, it is wise to stick to the lowest dosage that gives results in order to minimize side effects. Your doctor will be able to advise you on this.

It’s important to note that the topical fluocinonide can be fatal if swallowed. You should take precautions to keep all sources away from children and pets. Good hygiene is important to ensure that no traces could into unintended contact with food.

If immune suppressant medications fail, your doctor may prescribe anthralin, which is another cream originally developed to treat psoriasis. Another treatment option is minoxidil, sold under the brand name Rogaine.

A number of natural or alternative treatments are also available. Their most important advantage is that there are few if any, side effects.

One popular natural remedy involves rosemary oil as well as other essential oils.

One study focusing on alopecia areata, in particular, showed that 44% of patients that massaged a mixture of thyme, rosemary, lavender, and cedarwood in jojoba and grapeseed carrier oils into their scalps daily saw hair regrowth (9). 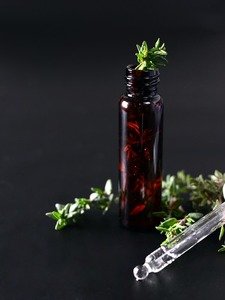 They experienced no unpleasant side effects even after long-term therapy.

A man named Francesc Casadó Galcerá even patented a hair loss lotion made from rosemary oil, hops, and swertia. This reduced loss, increased new growth by over 20% and increased microcirculation in the scalp.

Can I Use Fluocinonide for Pattern Hair Loss (AGA)?

The answer to this question is no. Pattern Hair Loss, also known as Androgenetic Alopecia (AGA) is not an autoimmune condition. While scientists do not exactly understand its cause, they believe it is linked to male hormones (androgens).

As a result, immune suppressant medications like fluocinonide will provide no benefit whatsoever.

If you have a known auto-immune disease or have noticed patches of hair loss on your scalp or other areas of your body, you may be suffering from alopecia areata.

The good news is that alopecia areata will spontaneously remit in up to 80% of patients who have limited patchy hair loss of less than a year’s duration. This means that leaving the condition untreated is a viable option and one that many doctors will recommend (wait-and-watch).

If your doctor does prescribe treatment, this may be a topical corticosteroid like fluocinonide. The response to fluocinonide will vary significantly from one patient to the next.

While some might see no benefits, others might have their alopecia areata go away indefinitely. For most patients, however, especially those with long-term alopecia areata, the results will likely be mixed (some responses that will only last as long as the treatment).