Cowlick vs. Balding: Is It Actually An Early Sign of Hair Loss?

Obvious changes in your hairline, such as recession or shedding, can cause worry. However, even natural changes can leave you wondering whether you are balding.

In this post, you will learn about the cowlick and whether it can be an early sign of balding. This article will also discuss some of the more common signs of hair loss, as well as some popular hairstyles you can use to cover up any unnatural hair patterns.

What Is a Cowlick?

A cowlick is a hair growth pattern that results in a trademark swirl appearance. This is commonly seen on the crown, but it can also be found on the back or front (hairline) of the scalp.

The name for this phenomenon comes from the pattern seen on bovine calves after the mother has licked her young clean.

The hair strands on your scalp will go in one of three directions: forward, backward, or sideways. A cowlick occurs when the hair gets “confused” as to which direction it should grow.

There are no boundaries on the scalp which tell hair follicles which way to produce hairs. As such, it is common for an area or two to have a few confused follicles which result in a cow-licked appearance.

Can It Be Fixed?

Hair follicles develop in utero. They first produce lanugo, which is later replaced by both vellus and terminal hairs. This means the direction of your hair is in place since before birth, and there is no way to “fix” this. Your genes largely determine if and how many cowlicks you will have.

Instead, many people with prominent cowlicks will use strategic hairstyles to cover up the swirl.

How to Tell the Difference Between a Cowlick and Balding

While a cowlick can give an appearance of balding, there is one way to tell whether it is a natural anomaly or an early sign of balding. In short, the answer is miniaturization.

Hair loss – whether caused by stress, DHT, or illness – can lead to a process known as hair miniaturization. With every new hair growth cycle, the hair follicle literally shrinks in size.

As miniaturization occurs, the hair growth cycle shortens. This results in shorter hairs being produced during the anagen phase. Eventually, the hair strands can no longer penetrate the scalp and baldness occurs.

When miniaturization is allowed to continue without treatment, the follicle will eventually die. Once this occurs, there is no hope of hair regrowth.

As a natural phenomenon, a cowlick does not cause follicle miniaturization. Therefore, if no miniaturization is present, then balding is not a current issue. This does not mean that balding cannot happen in the future. However, the lack of miniaturization indicates that at this time, no recession is taking place.

Other Signs of Early Balding

Even though a cowlick does not indicate early hair loss, it is good to know what to look out for should your luck change. Here’s a brief look at some of the earliest signs.

While you may not notice balding spots at the beginning of hair loss, you will likely notice the texture of your hair changing. One change happens as your hair becomes thinner and less voluminous.

Losing 50 – 100 strands of hair per day is normal. It occurs as a result of the hair growth process, as your hair follicles go through the telogen phase. However, excessive shedding is something you will quickly notice. You will most often see it on the pillow upon waking, or in the drain after a shower.

You do not necessarily need to count your hairs, but it helps to have a general idea of your daily hair fall volume. If you notice an increase in volume lost, it is time to take measures to fight early balding.

One of the first signs of hair loss that men notice is a receding hairline. This occurs when the hairline begins to form into the stereotypical M-shaped pattern.

(Are you unsure if your hairline is receding? Learn more here.)

This is a common sign as many DHT-sensitive follicles reside in this area of the scalp.

While this can be a symptom of other common issues, such as dandruff and psoriasis, you may experience itching and flakes as a result of DHT sensitivity.

This will most commonly occur in one area of the scalp, and this area may be where you notice thinning/shedding first.

A history of balding in your family is not a sure sign that you will experience balding at some point in your lifetime. It does, however, mean you are at an increased risk of Male-Pattern Baldness (MPB).

MPB, the most common cause of hair loss in men, is a condition that has a significant genetic component. This means that the more men in your family that are bald, the more likely you are to also lose your hair.

If MPB runs in your family, it is best to take a proactive approach to treatment. This means that even before you show signs of thinning and balding, you can practice techniques (such as scalp massage and exercises) that decrease your odds of developing baldness.

5 Hairstyles to Hide or Tame Your Cowlick

A bit of expert styling can cover up even the most noticeable cowlicks. You will need to choose a style that works well with the location of the cowlick. Here is a look at popular hairstyles for different locations.

1. At the Hairline – The Textured

With such a prominent location, you may be unsure how to expertly cover up the cowlick without making your intentions obvious. One style for doing so is The Textured.

You can do the textured look with either long or short hair. You can also combine it with other styles (such as The Taper). However, the main goal of the style is to draw attention away from the cowlick by adding a messy, textured look.

You can do this by brushing your hair upwards or in the direction of the growth.

2. At the Hairline – The Buzzcut

If you want to go for a much shorter look, the buzzcut is a good way to add intentional style while hiding the cowlick.

A buzzcut is a very short haircut that we frequently associate with the military. The buzzcut can have various lengths. All of them, however, are short and very close to the scalp. With a buzzcut, the cowlick will become unnoticeable as the hair cannot be ‘swirled’.

3. At the Crown – The Undercut

Cowlicks at the crown are sometimes the most noticeable but are also the easiest to hide. For this location, a longer haircut is recommended. However, if you are looking for something a bit different than the standard trim, you can consider The Undercut.

An undercut is just as it sounds. The hair on the bottom is the shortest, and the length on top can be anywhere from medium to long. The long hair on top will weigh down the hair near the cowlick, as well as cover the area.

Also known as the Princeton or Harvard Clip, the Ivy League is a coiffed and professional cut with the potential of becoming fun and casual. 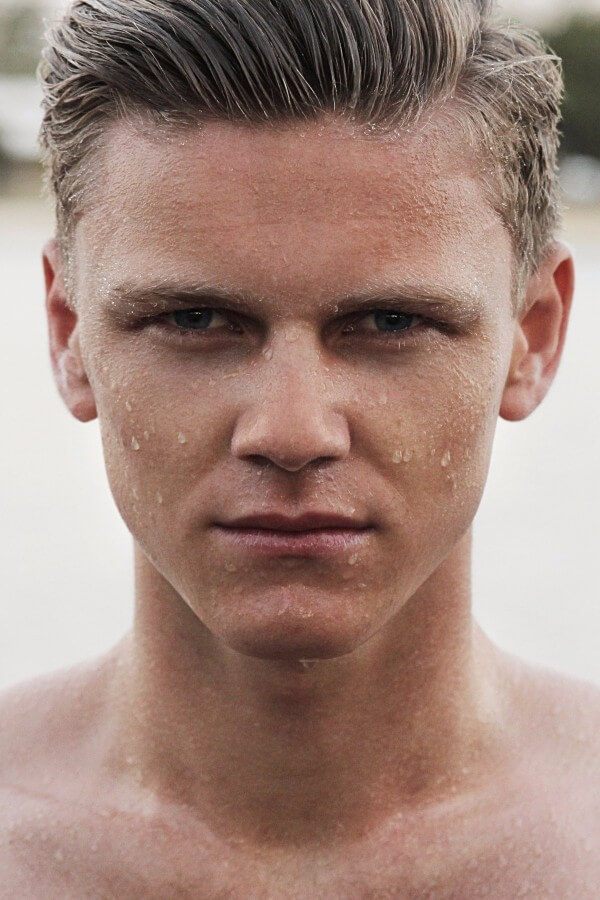 The standard Ivy League is a tapered look with the hair on top, brushed directly upwards or to the side. However, the Ivy League can also be combined with other styles, such as The Textured for a messier look.

Similar to The Taper, a Fade haircut starts longer on top and slowly tapers to a shorter look. Where the two cuts differ is in the technique. The Fade is much more detailed, and it aims to slowly fade your hairline into the skin. 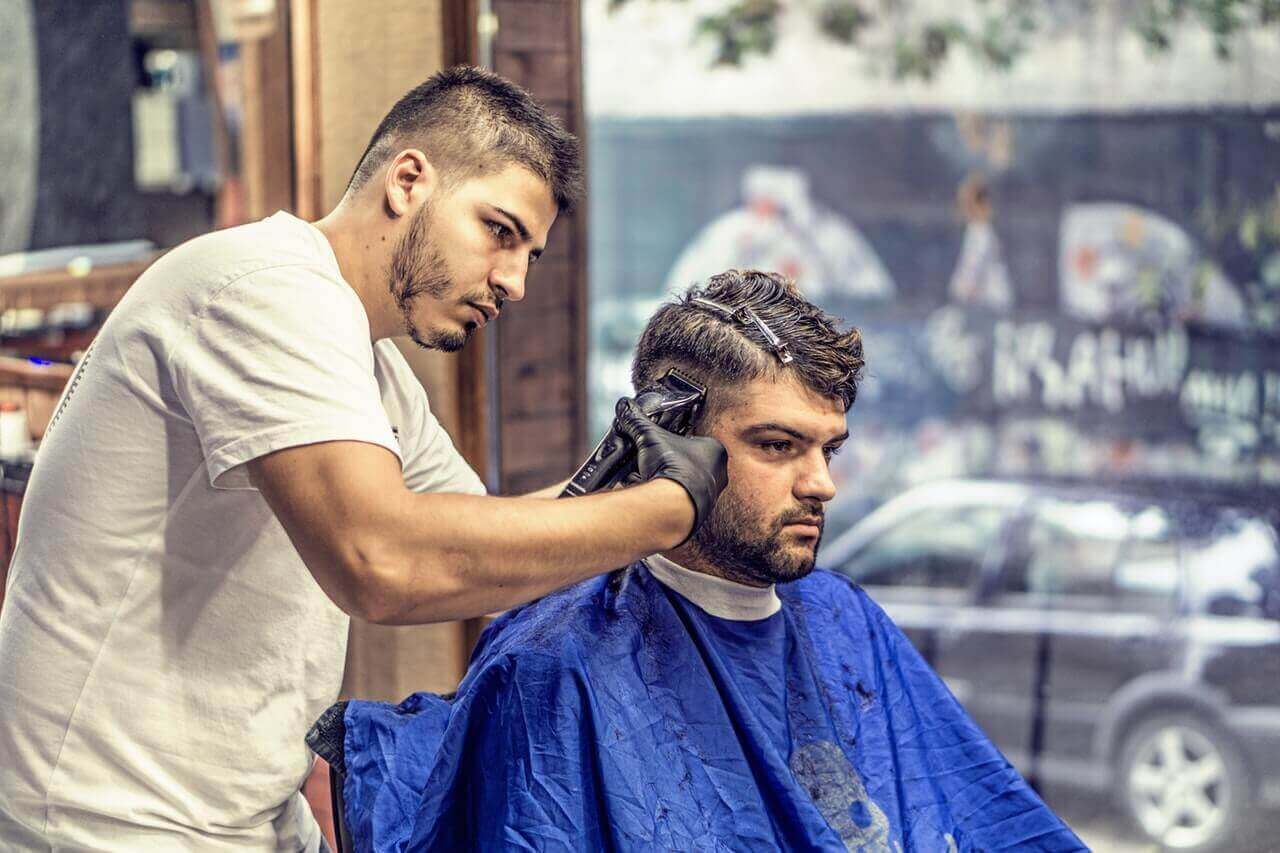 This is why it is such a great option for hair growth anomalies at the nape of the neck. With The Fade, your cowlick will disappear just as well as with a Buzzcut. The advantage is that you still have the length on top to style as you see fit.

Most people – both men and women – have a cowlick or two. As such, it is not related to hair loss.

The problem is that it can sometimes be difficult to distinguish a cowlick from early balding, especially in the crown areas.

When in doubt, you can take into consideration other factors, like the presence of miniaturization, hairline recession, and family history of baldness.

Fortunately, even if hair loss is an issue, there are steps you can take to slow (or stop) its progression.