Propecia Results: What To Expect From This Hair Loss Drug

By the age of 50, 30 to 50 percent of men will be affected by male-pattern hair loss to one degree or another (1). This figure continues to grow as you age, and if you have someone in your family who has the condition then your odds drastically increase.

This condition and its accompanying symptoms can be frustrating and emotionally draining, but fortunately there are medications available to treat it.

Propecia is one such medication, and the results experienced by thousands of men may be enough to convince you of its benefits.

In this post, I’ll first introduce Male-Pattern Baldness (MPB) and its cause. I’ll then discuss Propecia and the role it may play in treatment. This will include a look at some of the most thorough scientific trials performed on the drug.

I’ll then outline the results you might expect to see from Propecia, how long these results may take, and how you can increase the odds of the drug working for you.

An Introduction to Male-Pattern Hair Loss

Before we discuss Propecia in more depth, it’s crucial that you first understand the condition that the drug claims to treat.

But aside from genetics, what is the cause of the condition?

While scientists have formed many theories over the years, there are just a few which have stood the test of time.

The most commonly held belief is men and women with AGA are sensitive to the androgen hormone dihydrotestosterone (DHT). When DHT binds to androgen receptors on the hair follicles, this triggers inflammation and miniaturization of the hair follicle (2).

Over time, this causes the follicle to shorten and eventually die.

It’s very unlikely that DHT sensitivity is the only factor, though.

There may be localized factors that make the scalps of people with AGA the perfect place for DHT to thrive.

But no matter the cause, one thing is certain: if this condition goes untreated it will progress and eventually become irreversible.

So, what’s the solution?

Propecia is a drug (generic name of finasteride) that was first developed for the treatment of Benign Prostatic Hyperplasia under the name of Proscar (4). This is a condition in which the prostate is unusually large and leads to symptoms including difficulty urinating and incomplete emptying of the bladder.

What researchers discovered during initial trials, though, was that finasteride had the unusual side effect of hair growth.

This shouldn’t come as a complete surprise, however, because DHT plays a role in both AGA and BPH.

In simplest terms, finasteride works by indirectly reducing the amount of DHT that is produced within the body. It does so by inhibiting an enzyme – 5-alpha-reductase – that is critical for the conversion of testosterone to DHT (5).

For hair loss sufferers who treat their condition with finasteride, the sensitivity to DHT remains. However, the drug reduces the amount of DHT that is present within the scalp.

There’s no doubt that the science behind Propecia’s use as a hair loss treatment is promising. Let’s look more closely at just a few of these studies.

Study: Finasteride in the treatment of men with androgenetic alopecia (1998)

The first study to determine the long-term effects of finasteride use was published in 1998, just one year after Propecia was approved by the Food and Drug Administration (FDA) (6).

The study was split into two parts.

The first part consisted of 1,553 men between the ages of 18 to 41 years of age with male pattern hair loss. These men were split into groups, with one receiving oral finasteride 1mg per day and the other receiving a placebo.

As was expected, the group of men to receive the placebo treatment continued to see hair loss throughout the study. But clinically significant increases in hair count were noted at the end of the first one-year period.

The baseline hair count was an average of 876. This increased by 107 hairs at the vertex of the scalp.

The second half of the study followed immediately from the first. It consisted of 1,215 of the men from the previous one-year study.

Even at the two-year mark, the men who were receiving finasteride 1mg per day saw increases when compared to the placebo group. More specifically, hair count increased by 138 when compared to baseline.

Perhaps best of all, adverse effects were minimal. These included excess growth of body hair and a decrease in libido.

While mean hair counts can be a helpful indicator of hair growth, it’s not the most effective way of proving the drug’s effect.

In 2000, researchers recruited 212 men between the ages of 18 and 40 with androgenetic alopecia (7). The men were randomized to receive finasteride 1 mg daily or placebo for 48 weeks.

To track the effects of the drug on the participants, macrophotographs were taken of the scalp at baseline, 24 weeks, and 48 weeks. This enabled researchers to not only report on hair count increases, but to also track the percentage of hairs in anagen phase.

At baseline, mean total and anagen hair counts in the finasteride group were 200 and 124 hairs, respectively. This means 62 percent of their hairs were in anagen phase. This was quite similar in the placebo group, with mean total and anagen hair counts at 196 and 119 hairs, respectively, which means 60 percent of hairs were in anagen.

At week 48, the finasteride group had a net improvement in total and anagen hair counts when compared with placebo. These were 17.3 (8.3 percent) and 27.0 (26 percent), respectively.

But even more telling was the net improvement in the anagen to telogen ratio of 47 percent.

As the researchers so succinctly concluded: “These data provide direct evidence that finasteride 1 mg daily promotes the conversion of hairs into the anagen phase.”

These initial studies are certainly useful, but there have been more recent studies to back these claims, too.

Study: Evaluation of efficacy and safety of finasteride 1 mg in 3177 Japanese men with androgenetic alopecia (2012)

Ever since the development of Propecia, there has not been a long-term study which showed the effects of finasteride in men with AGA. This changed in 2012 when Japanese researchers published the findings of their study that took place from January 2006 to June 2009 (8).

The study consisted of 3,177 men of Japanese descent who had been previously diagnosed with AGA. These men were given a 1 mg per day dose of finasteride – the recommended dose for most patients.

Efficacy was evaluated by assessment of global photographs (using a standardized 7-point scale), and safety data were assessed by interviews and laboratory tests.

Even more importantly, this study showed that results continued to improve the longer a subject was on the drug.

But what about side effects?

Adverse reactions occurred in 23 (or 0.7 percent) of men, and seven men discontinued treatment based on risk-benefit considerations. However, there were no specific safety problems associated with long-term use.

Propecia Results: What You Can Expect

When starting a new hair loss treatment, it’s common to hope to see results right away. Unfortunately, this is never the case.

Just as you didn’t lose your hair overnight, so too are you not going to regrow it. But the earlier you begin intervention, the better.

So, what time frame can you expect when you start finasteride treatment? 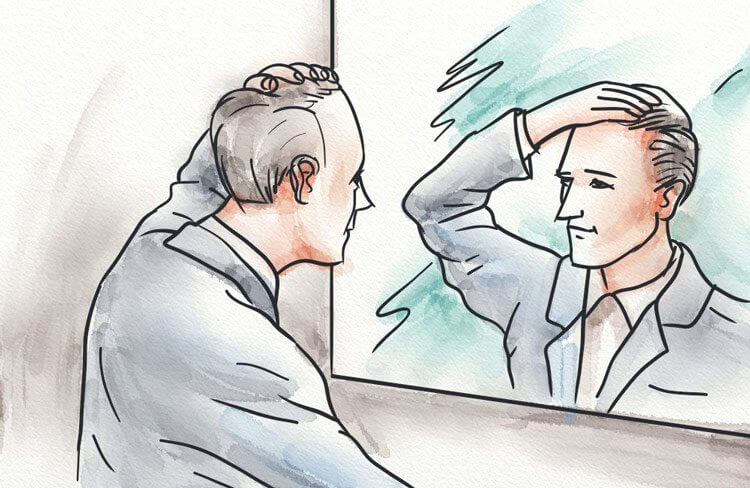 You will likely begin to notice changes in your hair within three to four months of use. These include a significant decrease in shedding, and perhaps even new hairs along the hairline.

However, it can take even longer (probably an additional four to six months) to begin to see regrowth and fuller hair coverage.

As the numerous studies on the topic have outlined, hair growth tends to peak at the one-year mark. By continuing the drug, though, you can prevent hair loss from reoccurring.

How to Get the Best Results

As with any medical intervention, there are a few things to keep in mind if you want to see the best results.

Foremost, you should take your medication as prescribed.

But what other steps can you take?

1. Add a Daily Scalp Massage to Your Routine

Finasteride works by lowering the levels of circulating DHT in the scalp. But another crucial aspect of hair growth is blood flow.

Blood delivers oxygen and essential nutrients to the hair follicle via the dermal papilla. Follicle miniaturization can slowly cut off the flow of blood to the follicle, though, and this leads to nutrient deficiencies and oxygen deprivation.

One way to reverse this is through manual stimulation of the area. In other words, scalp massage.

But how effective can a short session of scalp massage really be?

One study published in 2016 evaluated the effect of scalp massage on hair in Japanese males (9). More specifically, the researchers wanted to better understand the effect of stretching forces on human dermal papilla cells in the subcutaneous tissue.

The results showed that standardized scalp massage resulted in increased hair thickness 24 weeks after the beginning of the practice. The hair thickness counts increased from 0.085mm to 0.092mm over this period of time.

The researchers believe that gene regulation played a major role in these results. This is because a DNA microanalysis showed that a total of 2,655 genes were upregulated and 2,823 genes were downregulated.

There’s nothing wrong with a natural approach to hair growth, but sometimes the most effective treatments are those which have been developed for the sole purpose of promoting hair growth.

I’m speaking, of course, of minoxidil.

Minoxidil, also referred to by its brand name of Rogaine, was the first drug to be approved by the FDA for treating AGA. It works by increasing subcutaneous blood flow to the scalp, as well as upregulating growth factors (10, 11). 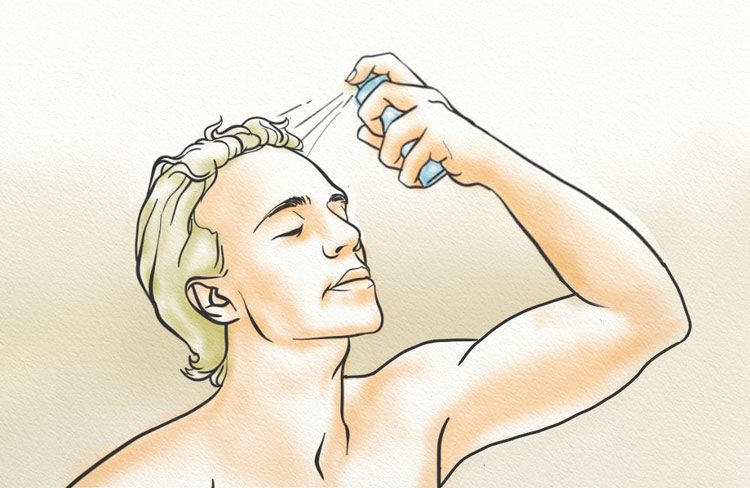 (You can learn more about minoxidil here.)

And it makes sense that if finasteride and minoxidil are successful separately, they can be even more successful when combined. In fact, minoxidil and finasteride combined has been shown to greatly increase the density of the hair during regrowth (12).

Side Effects of Propecia Use

As with any medication, there is always risk of side effects.

As mentioned above, adverse reactions are known to occur in men who take finasteride to treat hair loss. The risk is relatively low, however.

But what side effects should you be aware of?

The most common side effects of finasteride treatment are sexual in nature (13).

For some men, these side effects improve over time. In others, they may only resolve after they’ve stopped taking the drug.

Other side effects are often mild in nature and include dizziness, lightheadedness, unusual weight gain or loss, and tingling of the hands and feet (14).

Complications of Long-Term Use

As evidenced by the studies mentioned above, finasteride is not known to have caused any long-term complications for users of the drug.

In fact, side effects have been known to lessen over time or even disappear completely.

The brand name drug Propecia, also known by its generic form of finasteride, is the most commonly prescribed drug for the treatment of male-pattern hair loss. This means there is much scientific proof to back its claims.

So, is Propecia right for you?

This will depend on many factors, including your overall health status and the current state of your hair.

Propecia has been shown to significantly reduce (or even stop) shedding and, in some cases, it can regrow hair that’s been lost. But it doesn’t work for everyone.

To learn more about Propecia and the results you might expect, speak with your doctor. And if you have any questions about the topics covered above, please leave them below.