Going bald when you are young is terrifying.

Firstly, it makes no sense. “Don’t old guys go bald?” you think to yourself. I really shouldn’t be losing this much hair.

I remember when someone first mentioned that I had a receding hairline. I was around 17, and I had to go and look it up.

I didn’t even think I could possibly be going bald, so I innocently called it malting. You know, like dogs do – I thought it would just grow back.

Sadly, this was the start of male pattern baldness. While some young men start to bald at the back of the head (the so-called “crown”), most, like me, begin at the front.

My hairline kept on receding, particularly around the temples. My forehead kept on getting bigger. I tried to cover the high receding hairline by styling my hair forward. It worked, at least for a while.

(By the way, you can find out more about the difference between mature and receding hairlines here.) 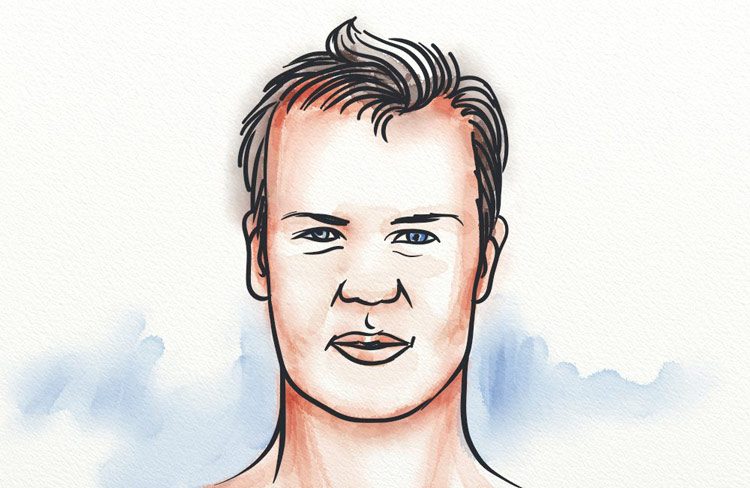 From then on, I was always paranoid about covering up my receding hairline.

Going swimming sucked because the water would inevitably expose my hairline.

Girls playing with my hair sucked.

After I realized it was male pattern baldness, it worried me every day.

Looking back now, I’m not surprised.

Not just our genes

I was genetically predisposed for hair loss, with a bald dad and a bald uncle from my mother’s side.

And as if that wasn’t enough, I also had a terrible diet. At the time, the concept of eating healthy didn’t really register with me.

I probably knew that Mcdonald’s wasn’t very healthy, and vegetables were “good for you”, whatever that phrase meant. 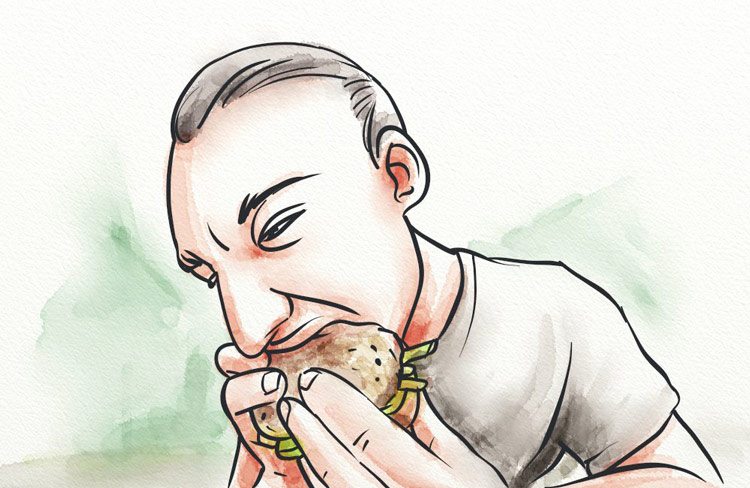 I am pretty confident that if I had known then what I know now, I would have never started balding.

It was my dietary and lifestyle habits that were triggering a genetic predisposition to hair loss (1). I knew deep down that this was not natural, regardless of my family history.

Let me explain what I mean.

Genetic predisposition is a characteristic of many medical conditions. These conditions run in families. This means you are at higher risk of the condition than a random member of the general population.

But with some exceptions, actually manifesting the condition is not an inevitability. It is not cast in stone. Your environment during childhood and into adulthood will often co-determine if you manifest the condition, or if it will forever remain locked away in your genes.

Hair loss is the same. Scientists don’t yet understand how many genes in total are involved, and on which of our 23 pairs of chromosomes all of these genes are located.

This is called polygenic inheritance (2).

But still – going bald at 20! Regardless of one’s genes, can that be natural?

How can that be natural at any age?

And the truth is, contrary to what some doctors will tell you, pattern hair loss is not that natural. What I found was that “male pattern baldness” is very rare in indigenous, healthy, and stable tribes.

And things seem to be getting worse with every generation (3).

To add insult to injury, not only are men losing their hair at an increasingly younger age, but the media obsession with external appearance makes their hair loss all the more conspicuous and painful.

So we have the perfect recipe for disaster. On the one hand, in the age of the internet and social media, emphasis on external appearance – including healthy hair – has never been higher.

On the other hand, with today’s standard diet being largely junk food in the form of processed, sugary carbs, pattern baldness is rampant (4).

We Are What We Eat

You see, prior to the industrial revolution, heavily processed carbohydrates and refined sugars were almost non-existent.

Today, supermarket shelves and fast-food restaurants are full of processed junk foods. Our body breaks these down into sugar, which then floods our system.

In response, our pancreas then releases a hormone called insulin. This breaks down the sugar and converts it into energy. But eventually, our body can’t cope with all this flood of sugar.

Our cells then develop resistance to the effects of insulin, and the levels of blood sugar become permanently elevated.

In the medical literature, this is described as insulin resistance and is related to an increased risk of heart disease.

The physiological mechanism behind this link is not yet clear. Yet the fact is that insulin is found in hair follicles. It is very possible that insulin plays a role in the regulation of androgen metabolism (discussed below), as well as the hair growth cycle.

Hair loss and the male hormones

For a long time, scientists have known that DHT is the hormone directly responsible for hair loss.

Drugs like finasteride block the enzyme (5-alpha-reductase) which is essential to making DHT (7). This leads to a reduction in DHT levels in people who take the drug, with the result that many of them often experience a reduction in the rate of hair loss. Some even grow a few of their hairs back.

But DHT is a naturally occurring hormone, found in all healthy adult males. So blocking it in such a direct and dramatic fashion with an evolutionarily novel, man-made compound, can predictably lead to nasty side effects (8).

The simple concept that most people don’t understand, is that the issue is sensitivity to DHT, not the DHT per se.

Hairs at the front of the head are more sensitive to DHT than those at the back. This is why they fall out first. It’s also why when you transplant a hair from the back of the head to the front it typically doesn’t fall out (at least if the hair loss is stabilized – more on this below).

Could it be that something in our modern lifestyles makes hair follicles more sensitive to DHT?

It seems very likely that this is the case.

Αside from the highly processed junk food most of us consume, there are lots of things that probably make hair loss worse. For example stress, a sedentary lifestyle like sitting at a desk all day, alcohol, smoking, tap water, chemicals in shampoos, commercial hair products, hairdryers, hair color dyes, etc (9, 10, 11, 12, 13).

You don’t have to go bald

Realizing this, I was able to turn my hair loss around. I’ve stopped the hair from receding and thinning and there is even some re-growth happening, which I can speed up.

I know that if I stick to the techniques and habits that got me here, I don’t have to worry about hair loss. That’s clear to me now when I look at people who started losing their hair around the same time as me. Their hair has progressively worsened, whilst mine has improved.

That’s a vindication of the insane amount of research and experimentation I’ve put it to get to this point.

I know it can feel hopeless sometimes with hair loss. This is why I created this website, to share with you the ways I stopped my hair loss.

Why isn’t this mainstream yet? Because it’s not as simple as some would have you believe. Saving your hair naturally isn’t about popping a pill.

You have to make dietary and lifestyle changes. You have to commit, and put in some effort. 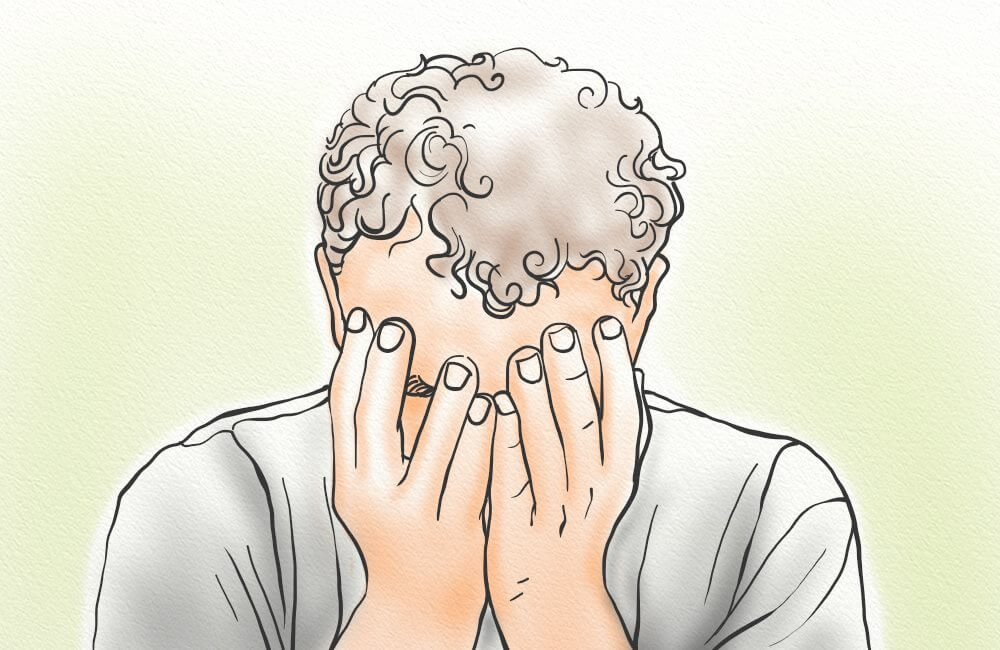 Despite what they might say, most people don’t care that much. Or at least that’s what their – lack of – actions suggest.

Only those searching hard for this information will make the most of it.

I don’t worry about hair loss these days. I know that if I stick with what works, I’ll be fine. If you want to learn more, then just browse this website. It is full of free, high quality articles and other resources.

Going bald at seventeen or twenty-five sucks, but it’s not hopeless.

Prevention is the best cure

Having said that, it is much harder to re-grow your hair than to keep it in the first place.

There gets a point where if the hair follicle has miniaturized for some time, it simply can’t be revived.

If you have parts of your scalp that are already shiny and don’t have any small, fine hairs, then you probably won’t be able to re-grow hair on those patches.

This is why you need to take action right away, starting today.

The good news is that after you have stabilized your hair loss and regrown any fine hairs that were dormant, you can always transplant hair in the remaining areas.

So preventing the loss of any more hair should be your number one priority. I wish I had known this information when I was 17.

Good luck, and if you have any questions, then please let me know by writing a comment below.