As we age, it is common to notice changes in our hairline. However, it can be difficult to tell when these changes are a natural maturation process, or when they indicate true hair loss.

You can also watch our video on the topic:

What is a Mature Hairline?

The hairline is a line of hair follicles that outline the outermost edges of your hair. It is the line that separates your hair from your forehead. Where the hairline naturally lies will depend on genetics and other factors.

Early in life, males and females have a so-called “juvenile hairline”. This is identical in both sexes: very low in the forehead and rounded (concave).

As males enter late adolescence, the hairline will naturally recede. This process will happen for nearly all males. It is a natural part of maturing, like developing a hairy chest or a deep voice. This is what we call a maturing hairline (1).

Maturing hairlines have two characteristics. Firstly, the retreat is moderate, around 1 to 2 centimeters. Secondly, the hairline retreats more or less evenly. The temple area might recede a bit more, but the hairline still looks like a relatively straight line.

What is a Receding Hairline?

Sometimes the hairline moves very  unevenly. Some parts retreat far more than others. And the area that almost always retreats more is the temple area.

This creates a characteristic M-shape pattern. Some people also call this “widow’s peak”.

The other important feature of a receding hairline is that the retreat can be substantial. Often the hairline recedes several centimeters. This leads to a noticeably larger forehead.

Similarly with a receding hairline. Though very common, it is not a normal process. Rather, it is the first sign of the most common type of male hair loss: Androgenetic Alopecia (AGA) (2).

Another name for AGA as male-pattern baldness. You will hear people calling it by either name.

What Causes a Receding Hairline?

Dermatologists use the so-called Hamilton-Norwood scale to assess the severity of AGA. A receding hairline is stage 2, the first stage of hair loss. Complete baldness is stage 6 or 7 on the scale. 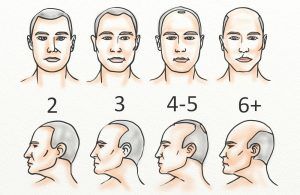 Genetic and hormonal factors combine to affect the development and progression of the condition (3 , 4)

Twin studies have shown that heredity accounts for around 80 percent of the predisposition to baldness (5). However, the proximate cause involves androgens, the male hormones.

Scientists believe that men with AGA have an inherited sensitivity to this androgen. There are certain follicles that are more sensitive to the androgen than others. In males, these are at the temples and crown.

There are other factors that contribute to AGA. Scientists have found that there are many changes in the tissue between the hair follicles. This tissue becomes inflamed and develops microscopic scars. This process is called fibrosis (7). As the fibrosis advances, it becomes more and more difficult to regrow the lost hair.

All these processes are under genetic control to a large degree. But this does not mean that other factors are not crucial (8). Some of these other factors are the environment, lifestyle choices, nutrition, hair care routines, stress and illness.

How To Tell Whether You Suffer from Male-Pattern Baldness

We can now summarize the key points to determine if your hairline is receding or simply maturing.

A Consultation With Your Doctor

If you suspect that your hairline is receding, the next step is to get a doctor’s confirmation. A dermatologist can usually determine very quickly if your new hairline is the first sign of AGA. Often a quick visual examination is enough. In borderline cases, the doctor may run special tests, including a scalp biopsy (9).

How to Stop Further Recession 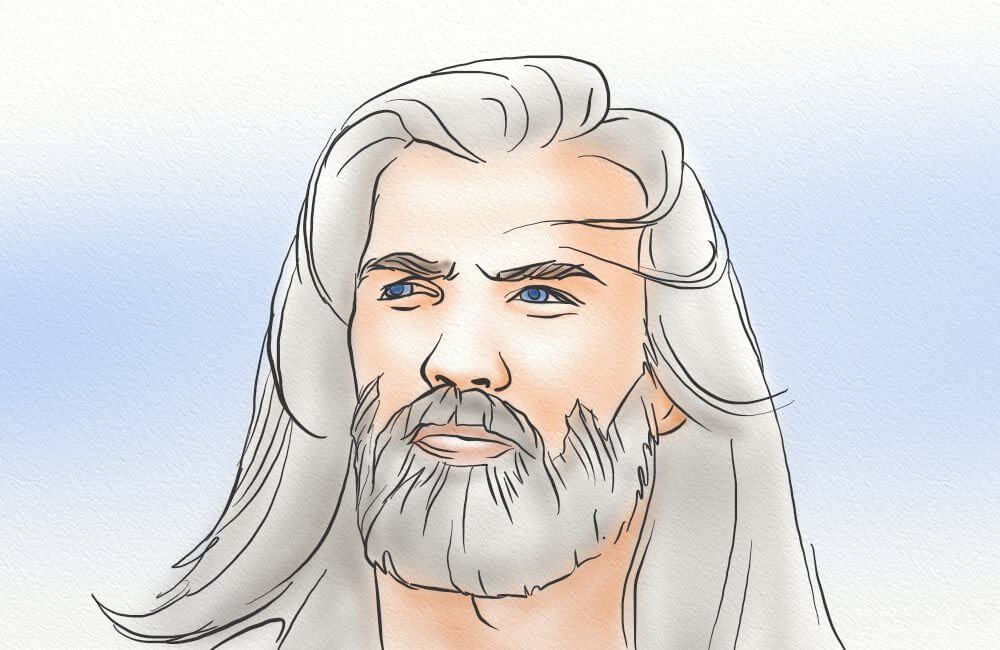 Once you have confirmed your hairline is receding, the next step is to treat it. Your doctor will outline your various treatment options.

Minoxidil is a topical solution that was originally developed as an oral hypertensive (10). However, one side effect of the drug that patients and doctors noticed was hair growth.

This side effect became so well-known that the drug was often prescribed off-label for men with pattern hair loss.

Eventually, a topical solution (Rogaine) was developed and approved by the Food and Drug Administration (FDA) (11).  The FDA has since also approved it for use by women.

Around 50% of men will respond positively to minoxidil. For these men the hair loss will stop. They can also see some mild regrowth in thinning areas. The remaining 50% of men will be non-responders. The manufacturer of minoxidil suggests they stop treatment if they see no results after a few months.

Finasteride is an oral prescription medication for male-pattern baldness. It works by inhibiting the activities of 5AR. This is the enzyme responsible for the production of DHT (12). By blocking the action of 5AR, the levels of DHT in the body plummet.

Finasteride is usually more efficacious than minoxidil. Around 80% of men who start prescription finasteride will see their hair loss stabilize. This means that the hairline will stop receding. Areas that have started to thin will also stop thinning further.

This drug is currently only approved by the FDA for use in men. Though it is very effective in stopping hair loss, regrowth is generally weak (13).

Side effects can be a major concern for some finasteride users. They are sexual in nature, and include erectile dysfunction and loss of libido (14).

A more ‘natural’ approach to hair growth is microneedling. This technique involves a tool (either a roller, stamp, or pen) with hundreds of tiny needles that puncture the scalp.

Without causing pain or damage, the dermaroller penetrates the dermal layer of skin. This increases blood flow to the hair follicles and stimulates new cell production.

In fact, this technique has been shown to be effective even in men who failed to respond to more traditional (e.g. minoxidil and finasteride) treatments (15). When used in combination with minoxidil, it gives far superior results (16).

For detailed instructions on use, go here.

Aside from these treatments, you can also make lifestyle changes. These will be very easy to implement and cost no money. They will typically not be enough to restore your previous hair.

However, by making these simple lifestyle changes you will ensure you are not needlessly aggravating your hair loss:

By understanding the difference between the two, you will be able to identify and treat your pattern hair loss early on (if your hairline is indeed receding). This will give you a significant advantage compared to men that start treatment late. In hair loss, early treatment gives the best results.

Always talk to a qualified medical professional to confirm any diagnosis. They will also be able to help you in selecting the hair loss treatment right for you.

Let us know if you liked the post. That’s the only way we can improve.
Learn More
Learn More

Click Here To Get Your Hair Loss Analysed - Completely Free, Results In Less Than 3 Minutes