An uneven hairline can be both terrifying and devastating to men and women alike. But does it really mean that you’re predestined to suffer from pattern baldness, or is there a possibility that the occurrence is just natural, normal change to your hair?

In this post, we’re going to discuss different hairlines, and you’ll learn three major things on this topic:

So, if you’re ready to learn more about your unnatural hairline and what it means for you, keep reading.

You’ll learn the most likely cause of your hair loss, as well as how to go about regrowing it (if possible).

What is an Uneven Hairline and What Causes It?

An uneven hairline is a hairline that is asymmetrical, typically with one side having less hair than the other side.

This is a common phenomenon, experienced by both men and women.

There’s a few things which can contribute to this kind of hairline. From traction alopecia to male-pattern baldness to genetics. But let’s take a closer look at each one.

This is really just a fancy term for hair loss caused by over styling, but it’s a common problem for many men and women.

Even in individuals with healthy hair follicles and no family history of male-pattern baldness, hair loss can occur as a result of too much stimulation (through combing/brushing or constant wearing of hats/caps) or too much pressure. This can be seen in both males and females.

It’s commonly believed that male-pattern baldness is caused by a sensitivity to DHT, a by-product of the sex hormone testosterone.

Men with this form of balding experience hair loss in the tell-tale M-shaped pattern. This is because androgen receptors are located in abundance near the temples, and this is what DHT attaches to when it makes its way to the scalp. 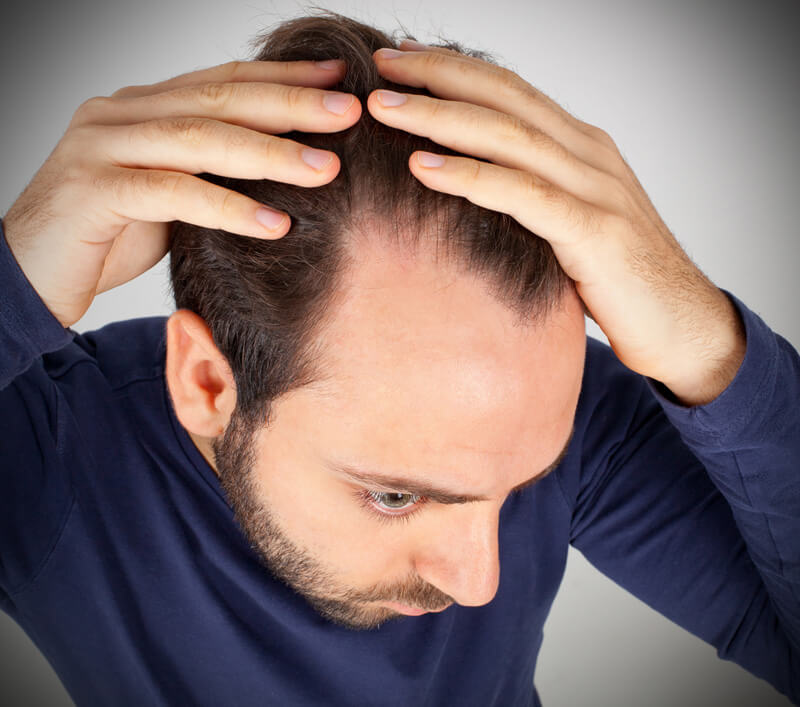 Just as the majority of faces aren’t symmetrical, the same could be said for hairlines. So, if receding hairlines are a common occurrence in your family – and they aren’t accompanied by hair loss – then it’s likely that the unusual recession is simply your natural hairline.

If you’ve just begun to notice an recession pattern to your hairline, you may be wondering whether this is a sign of imminent hair loss. That answer is, maybe.

As mentioned above, male-pattern baldness can certainly contribute to thinning and hair loss on the hairline. And, in some individuals, this balding can be asymmetrical. So, how can you know whether your hairline is natural or a symptom of something more?

First, ask yourself when the hair loss appeared.

If you’ve had it all your life and hair loss is never been a problem, then it’s likely that this is just your natural line.

It’s also possible for the hairline to start receding in different places at a later point – during your late teens and early 20s – without it being a sign of imminent hair loss.

This is because as you mature, your hairline does as well. This is a natural process and, as long as the receding stops, it’s nothing to worry about.

If the unevenness of your hairline has seemed to occur almost overnight, however, then it’s good to better acquaint yourself with other symptoms commonly seen in individuals in the early stages of balding.

Other Symptoms to Indicate Hair Loss

As male-pattern baldness progresses, it becomes much easier for the loss to be diagnosed as such. In the beginning, however, the symptoms may be a bit more subtle. So, let’s take a look at some of the common symptoms associated with hair loss.

Obvious Hair Loss in the Shower

Due to the agitation involved in shampooing and massaging your scalp and hair, the shower is a great place to keep an eye on hair fall. 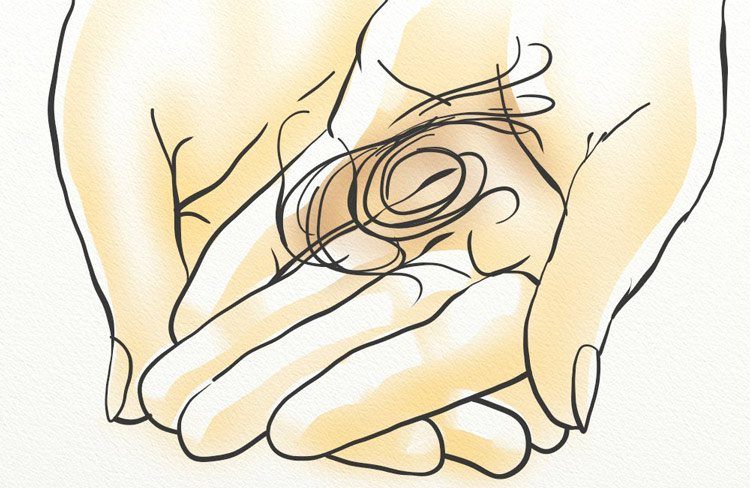 Of course, while you can’t exactly measure the amount of hair loss seen, it’s quite easy to tell when it’s becoming more than usual.

If your hair loss is caused by androgenetic alopecia (male-pattern baldness), then it’s likely that you have a buildup of DHT on your scalp. 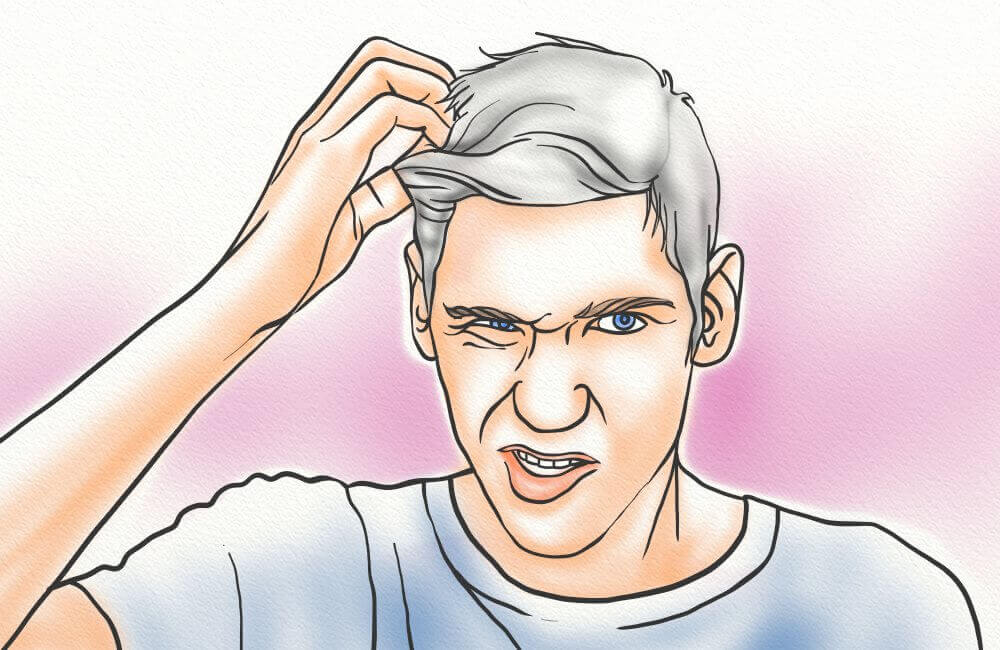 This buildup can contribute to the itching and flaking that is commonly seen in individuals with hair loss.

Fortunately, there are natural ways to remove the buildup of DHT on the scalp.

Pattern hair loss occurs as a result of hair follicle miniaturization. In simplest terms, the sensitivity to DHT triggers the resting phase in the follicles.

This leads to shorter and shorter hairs being produced until, eventually, the hair shaft is too short to penetrate the scalp.

As the hair loss progresses, you may notice thinning in the form of wispy areas of hair. This is most likely to be seen in the temples or near the forehead because, as mentioned previously, this is where the most sensitive androgen receptors reside.

While having relatives with male-pattern baldness doesn’t mean you’re 100% predestined to inheriting it, it does mean you’re genetically predisposed to the condition.

How to Fix Your Hairline

There are a few popular methods which can be used to fix your line of hair.

Get a Hair Transplant

While I don’t recommend hair transplants, there’s no doubt that this is a common treatment for men and women who suffer from uneven hairlines.

The procedure involves the grafting of hair from other parts of the body (typically the back and side of the scalp) onto the bald areas. There are a few different harvesting methods, though Follicular Unit Transplant, involving the extraction of a linear strip of hair, is the most common. 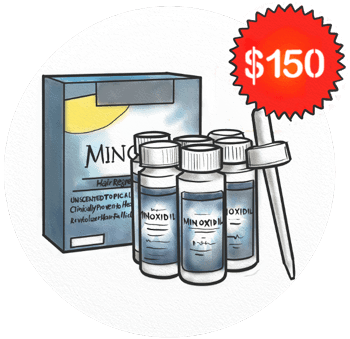 In almost half of individuals who use Minoxidil to treat frontal baldness, results are positive.

However, before you give this method a try, there’s two major things to consider.

First, Minoxidil only works as long as you use it.

This means that, while the results may be encouraging, you’ll have to continue use for your whole life if you want to continue to see them.

It also takes quite a long time to work, and often involves an initial period of shedding.

Second, frontal baldness (and uneven hairlines) are typically related to male-pattern baldness, as mentioned above.

The only way to truly treat the problem, then, is to treat the underlying cause.

The underlying cause of hair loss will vary. And while DHT was believed to be the sole culprit of MPB for decades, it now seems that other causes, like scalp tension, may be equally (or more so) to blame.

One of the reasons that minoxidil works so well is because it increases blood flow to the immediate area. There’s a way to do this without minoxidil, though, and that’s scalp massage.

Scalp massage is manipulation of the scalp using either your fingertips or a dedicated head massage device. As the scalp is massaged, the blood flow will be increased. This will ensure the delivery of oxygen and vital nutrients to the hair follicles.

It also works by reducing scalp tension which is believed to be a major contributor to hair loss in many men.

Your massage sessions should last about 10 minutes. Consistency is key, so it’s good to perform the massage once or twice per day.

If you’re looking to further increase blood flow and reduce scalp tension, then consider performing microneedling. You can do this in addition to, or in place of, scalp massage.

Microneedling is a procedure that involves the use of tiny needles. The needles penetrate the scalp, which causes wounding. As the wounds heal, the process will encourage blood flow and stimulate hair growth.

A few notes for your safety:

To get started, I’d recommend you use a needle length of no more than 1.0mm. You can perform microneedling once or twice per week.

Note: If you currently use minoxidil or another topical solution, you will want to avoid applying the solution immediately following the procedure. You should wait at least 12 hours before applying a topical solution to the scalp.

If you’re looking to only target your hairline, then laser therapy can be a good option to consider.

Laser therapy involves the use of low-light lasers. The lasers stimulate the hair follicles, and this is believed to promote hair growth.

How exactly do the lasers work?

Lasers have been used for years in the medical, especially dermatology, field. In terms of how lasers may be used to stimulate hair growth, here are a few possible mechanisms as supported by scientific findings:

One reason that many people may not consider laser therapy to be a viable option for hair growth is the price point. It can be costly and time consuming to get laser therapy done by a medical professional.

The good news on that front, though, is that there are many at-home LLLT devices available.

The most popular LLLT devices for at-home use are laser combs and laser helmets. They are easy to setup and use, so you can perform LLLT in the comfort of your own home. 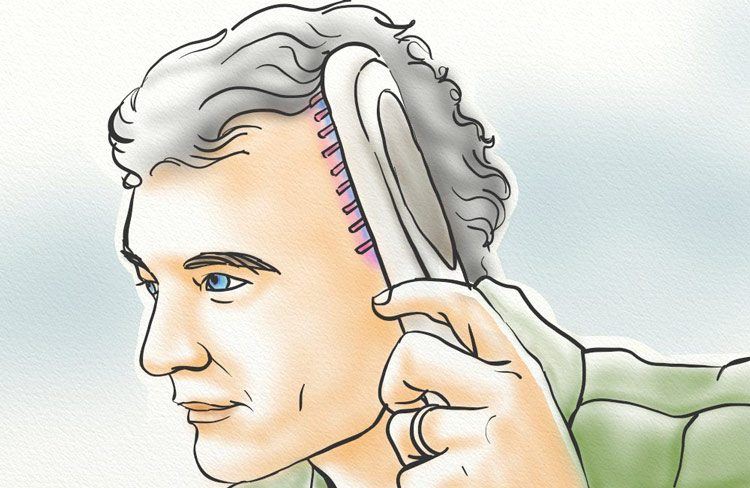 There have been human studies done in regards to LLLT and hair growth. However, further studies are required to determine true efficacy and safety.

Speaking of safety, how can we know that laser therapy is safe to use?

While LLLT has yet to be approved by the FDA, laser combs have been declared safe for human use by the FDA.

As discussed, an wonky hairline can be an indicator of a deeper issue – namely, male-pattern baldness – but it can also simply be a natural occurrence due to genetics.

However, there are ways to treat the issue no matter its cause. This article is just the beginning. If your patchy hairline does worry you, and you think it may be the first sign of pattern baldness I recommend tackling the problem now.

For example, there are diet changes and scalp massages which can help to thicken your hairline within a few months when done correctly.