Minoxidil is a popular treatment for frontal hair loss. The brand name is Rogaine, but retailers sell generic versions under various names. Millions of people over the past 30 years have tried minoxidil. It is still the first treatment a man with frontal hair loss is likely to try.

This article will explain:

Watch the video below if you prefer videos to reading:

Most scientists today believe that DHT is the main cause of frontal baldness.

DHT is an androgen (a male hormone) (1). Men produce this hormone naturally. Their bodies make DHT through testosterone, via an enzyme called 5-Alpha-Reductase (5AR).(2).  5AR attaches to testosterone molecules and converts them to DHT. This endogenously synthesized DHT then circulates throughout the body, attaching to cell structures called Androgen Receptors (ARs).

When DHT attaches to ARs in the scalp, it can lead to hair thinning and ultimately baldness. This happens through a process known as hair follicle miniaturization (3). Under the influence of DHT, the follicles become progressively smaller and weaker. In the end they become so small that their hair cannot even protrude past the scalp (4). This is the underlying physiological mechanism of  male-pattern baldness, also called Androgenetic Alopecia (AGA) (5). 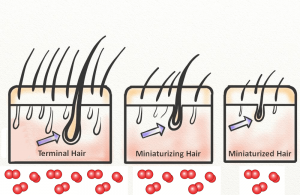 For most men, the first signs of AGA are in the frontal hairline, specifically near the temples. The temples are the first to thin, and ultimately go completely bald. The rest of the front hairline then follows.  Dermatologists call this a receding hairline.

To summarize, frontal baldness is typically the first sign of AGA. If left untreated, the AGA may spread to the entire top part of the head. In advanced baldness, there is hair only on the back and sides of the head. This progression of hair loss is captured in the so-called Norwood scale, depicted below.

Blocking DHT in the Body

There are two drugs on the market which inhibit (block) 5AR. Their names are finasteride and dutasteride (6). Under the influence of these medications, the body cannot make DHT, and the levels of DHT plummet (7).  While these medications seem like the logical approach to treating pattern hair loss, they have some downsides.

DHT is a naturally occurring androgen. Blocking it all over the body just to treat the tiny hair follicles can have adverse side effects.

The most significant of these are sexual in nature: impotence and loss of libido. (7). They occur in a minority of men, between 3-8%. Even though rare, these side effects are so unpleasant that many balding men reject the use of DHT blockers altogether.

Minoxidil is an alternative to DHT-blocking medications. It is a vasodilator: it dilates the blood vessels, allowing more blood to flow through them. Originally, it was sold as a pill to treat hypertension (8).

Doctors and patients soon noticed an unexpected side effect: hair regrowth. This made it a popular off-label treatment for pattern baldness. In other words doctors prescribed it for baldness, even though it was officially sold for high blood pressure.

Eventually, the manufacturer developed a topical formula specifically for hair loss. They called it Rogaine .The FDA approved it as a topical treatment for balding men in the late 1980s (9). It was the first medication the FDA ever approved for this purpose.

As a vasodilator, minoxidil increases blood flow to the scalp (10). It also upregulates Vascular Endothelial Growth Factor (VEGF). VGEF promotes vascularization of the dermal papilla cells in the hair follicles (11). This means that it creates more small blood vessels.

These dual actions of minoxidil ensure an adequate supply of oxygen and nutrients to the miniaturizing follicles. They also artificially stimulate the hair follicles to stay in their active growing phase (anagen) for longer.

This halts the miniaturization process, and in some cases even partially reverses it. In a way, minoxidil works despite the presence of DHT.

Not everyone will benefit from minoxidil. Around one out of two men will see no benefit (12). The package insert recommends these men stop using it if they see no regrowth after 4 months.

Like other hair loss treatments, minoxidil works best for hair loss in the crown. This is the top portion of the head. The crown also goes bald, but chronologically it tends to follow the front (see Norwood scale above). Eventually the bald areas in the front and crown of the head advance to the point of fusing. The entire top part of the head is then bald. 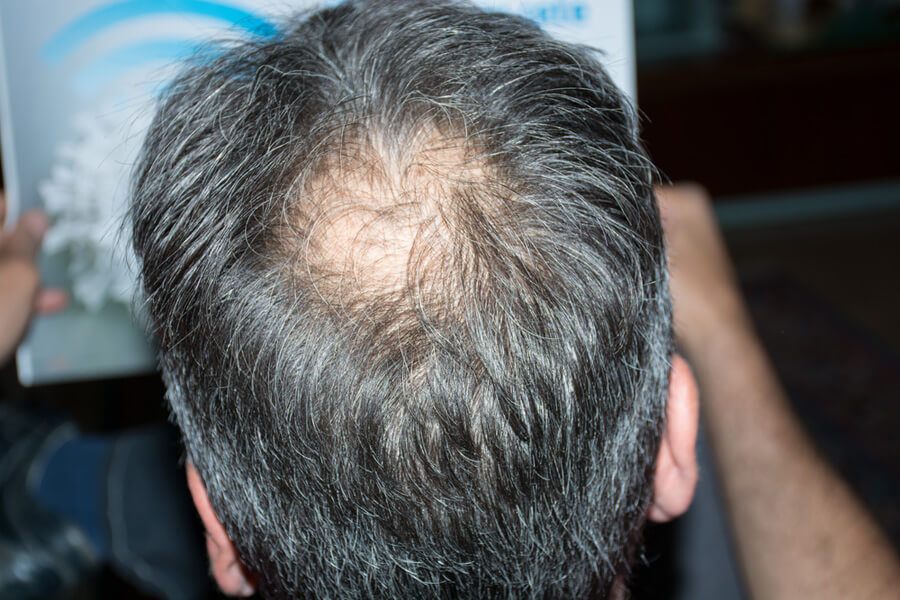 When the FDA approved minoxidil as an AGA treatment, it noted that minoxidil (13):

a) is only effective for around one out of two men.
b) works best for hair loss in the crown|
c) is most effective at stopping further hair loss rather than regrowing hair

The reason minoxidil works best in the crown is not completely understood. Scientists have found that at the molecular level, follicles in the crown and frontal area respond similarly to minoxidil (14). The reason for the different results may have to do with differences in the space between the hair follicles, the so-called perifollicular space.

What to Realistically Expect from Minoxidil

The above is not cause for despair. It only means that users should have realistic expectations.

First, a user should understand he has a 50% chance of responding to minoxidil. If he does respond, the crown is likely to respond best.

This does not mean that minoxidil is always ineffective for the front. It sometimes gives results, but within limits.

This means that minoxidil cannot restore a receded hairline. What it can do is increase density in the areas behind the hairline that are in the process of thinning.

For men who respond positively, minoxidil regrowth peaks at the 1-year mark. The positive effects of minoxidil then starts to slowly decline (15). By the 5-year treatment mark, most men who continue treatment will still be better off compared to baseline. But for some men, hair loss might resume again after some years. In this sense minoxidil is like most other medications: some users eventually develop tolerance, but this varies from person to person.

How to Use Minoxidil for Hair Growth

One of the appeals of minoxidil is that it is a topical medication. Absorption into the bloodstream is minimal. This means there are few systemic side effects. We will discuss these shortly.

There are two different solutions: foam and liquid. They are available in 2% and 5% strength. The 5% strength gives slightly better regrowth, but side effects can also be stronger (16). Consumers can choose the version that works best for them. Both foam and liquid versions are for twice daily use. 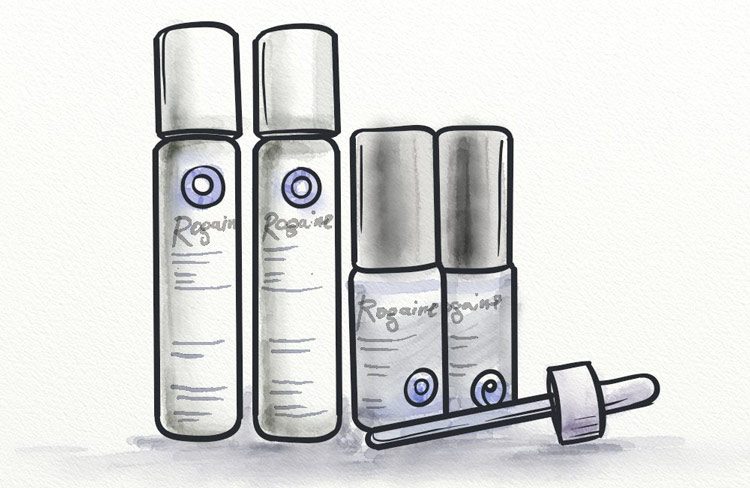 Minoxidil’s patent has long expired. This means there are numerous of store brands available. Rogaine, however, remains the most popular brand.  Consumers can purchase it from various retailers, both brick-and-mortal as well as online.

To save money you can choose a generic version like Kirkland. When purchasing a generic brand, however, make sure to double-check the active ingredients.

A derma roller is a microneedling tool that stimulates blood flow to the scalp (17). It is the easiest way to increase minoxidil’s effectiveness by 3 or 4 times, including for frontal hair loss.

The dermaroller consists of a handle attached to a rotating barrel. On the surface of the barrel are a few dozens or hundreds of small needles. Rolling the dermaroller over the blading scalp creates thousands of tiny holes. These are not large enough to cause permanent damage. They are, however, large enough to stimulate the scalp to release collagen and growth factors. The tiny holes also increase the absorption of minoxidil.

Once weekly sessions are sufficient to see results. Not only will you increase your chances of responding to minoxidil, but you are also likely to get far better regrowth (18).

To use the derma roller is simple. Using a 0.5 mm to 1 mm derma roller, apply enough pressure to the scalp that the needles penetrate but do not cause pain. Roll in multiple directions over the area of hair loss. First do side to side, then back and forth. Finally, diagonally in both directions.

You can see a detailed how-to guide here. Also claim your own free dermaroller here.

Are There Side Effects?

As with any treatment, there is always a risk of adverse effects.

Minoxidil’s most common side effects are dermatological . They include itching, flaking, and redness (9).

Other side effects are due directly to the minoxidil itself. Minoxidil can still reach the bloodstream sometimes, even though it is a topical. This can then cause symptoms in various parts of the body. They include flushing of the face and neck, headaches, light-headedness, dizziness, palpitations, and chest pain (8).

Even though minoxidil is over the counter, you should speak to your doctor if you have heart issues or any other medical condition. Similarly if you are on other medications that might interact with minoxidil.

Some formulations combine the two mechanisms of action into one bottle for superior results. One such product is Biogaine, a non-pharmaceutical topical that also inhibits DHT at the level of the hair follicle.

Another option is combining topical minoxidil with topical finasteride. Studies find that this combination is effective and superior to simple minoxidil, as the two drugs work synergistically for more regrowth (20). Because the finasteride is topical, systemic absorption is minimal. This means the user is very unlikely to experience any systemic side effects, sexual or otherwise.

With four fifths of the male population affected by hair loss, companies have created a large number of treatments over the years. Minoxidil is arguably the most popular of them all.

About half of those who use minoxidil will see results. These results only last as long as the treatment continues. Despite these limitations, its low cost and good safety profile make it a treatment worth trying.

Minoxidil is more likely to work for hair loss in the crown. This does not mean it cannot give regrowth in the front. When this happens, however, it will be limited to thinning areas. Minoxidil will not be able to affect frontal areas that have gone completely bald. It cannot therefore restore the hairline, at least not as monotherapy.