Rogaine Foam: The Guide To Using It To Regrow Hair

Rogaine is a popular hair loss product available in three formulations: Liquid, Extra Strength Liquid, and Foam. In this post, I’m going to discuss the foam formulation including how it works and how to use it.

In addition, I’ll take a look at the product’s ingredients, some common side effects of use, and how it compares to the liquid formulation.

There are many types of hair loss, but Androgenetic Alopecia (AGA)  (also known as male pattern baldness) is the one most commonly associated with thinning, hairline recession, and total balding (1).

In short, AGA is caused by sensitivity to the androgen DHT (2). DHT is produced when testosterone (sex hormone) and 5-alpha-reductase (an enzyme) interact, and it’s a normal process that occurs in both men and women.

For a longer explanation, let’s look at how exactly DHT contributes to hair loss.

(Do you want to unblock your hair follicles? Learn my natural method here.)

In individuals with AGA, DHT limits the input received by follicles due to inflammation. As DHT attaches to androgen receptors near the sensitive follicles, the follicles respond by ‘protecting’ themselves.

This protection comes in the form of inflammation, but long-term inflammation means that the necessary inputs are cut off for too long (3).

As the hair follicles miniaturize, the hair that is being produced is unable to grow as it should. It becomes smaller and smaller until it soon no longer grows at all.

There are other factors at play (including genetic predisposition to hair loss and health habits), but DHT has been shown to play a significant role in pattern baldness.

How Does Rogaine Work?

Now that you understand the process of hair loss, let’s discuss how Rogaine works to stop the loss.

Unlike Propecia (another popular hair loss medication), Rogaine doesn’t rid the scalp of DHT. Instead, it makes it possible for your hair follicles to function and receive input, even in a hostile environment.

How does it achieve this?

Rogaine’s active ingredient, minoxidil, was first developed and marketed as a vasodilator (under the name Loniten) (4). This means it was used to relax the walls of the blood vessels so blood circulation could improve.

In individuals with AGA, improved circulation to the scalp means oxygen and nutrients are being delivered to the follicles. As a result, the follicles no longer miniaturize, and hair regrowth is able to continue uninterrupted.

Can Rogaine Be Used by Women?

When Rogaine was initially approved by the FDA, the product was only approved for men. Eventually, Rogaine became available to women in the 2 percent concentration (known as Women’s Rogaine). 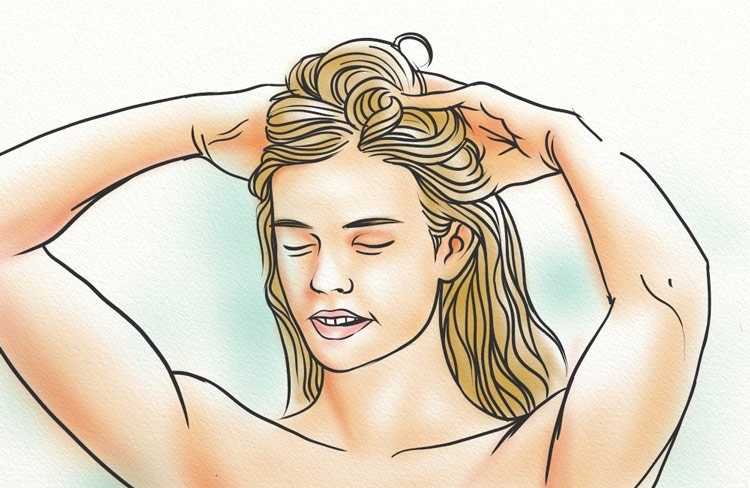 When Rogaine foam first came on the market, the same applied. It was initially approved for men at both 2 percent and 5 percent, but developers soon rolled out a Women’s Rogaine foam formulation.

How to Use Rogaine Foam

While Rogaine liquid isn’t difficult to apply, there’s no doubt that the foam formula is a much quicker process. Here’s how to do it.

This is a routine you’ll need to repeat every morning and every night.

For women, you only need to apply Rogaine once per day.

While application for both men and women is a straightforward process, there are a few things you can do to improve the way in which you apply the formula. Here are a few tips I recommend you take into consideration.

1. Apply to a Dry, Clean Scalp

For best results, you’ll want to apply to a dry scalp. This will give the foam a chance to better absorb (as there’s less chance of evaporation).

It’s also best to apply to a clean scalp, as this will ensure the pores can best absorb the formula.

(Learn how to clean your scalp naturally here.)

While massage is an excellent scalp stimulator, I highly recommend the use of a dermaroller.

A dermaroller is a microneedling tool that creates small puncture wounds in the scalp. As the wounds heal, healthy follicles are produced. In addition, this tool can improve blood circulation (which will further contribute to healthy hair growth).

Don’t believe me that a simple tool can have such a positive effect on hair growth? Take a look at the hair growth results from this study (6):

Overall, the best application tip is to be consistent. You won’t see results unless you commit to use. This means using it consistently (once or twice daily, depending on your gender) and sticking with it for at least six months.

While this may seem like a no-brainer, many users of Rogaine stop within the first few weeks due to a “symptom” known as dread shed.

This occurs when your hair cycles from the telogen phase of growth to the anagen phase, and your hair shedding increases.

It’s easy to be alarmed by the amount of hair shed, but many users only experience excess shedding for a few weeks. If you want results, you’ll need to power through the initial shed.

As will be discussed further later on, the foam version was developed in an attempt to lessen side effects experienced by Rogaine users.

Some more common adverse effects to be aware of include itching, flaking, dryness, and redness. These may be temporary, or they may progress over time and become unbearable.

Some less common ones to look out for include swelling of the hands and feet, chest pain and fast heartbeats, lightheadedness, and headaches.

If you experience any of these symptoms, you should stop use until you’re able to speak with a physician.

While rare, you can experience a severe allergic reaction to Rogaine. This is called anaphylaxis, and it requires emergency medical attention. Symptoms include hives, difficulty breathing, swelling of the lips, tongue, mouth, and throat, and nausea/diarrhea (7).

Do also keep in mind that when you first start minoxidil, you’ll likely experience a period of increased shedding (8). This is normal, and it should stop within a few weeks.

While the active ingredient present within Rogaine is minoxidil, there are a number of other ingredients included that help to deliver the minoxidil to the scalp.

These include butane, butylated hydroxytoluene, cetyl alcohol, and polysorbate 60:

These preservatives and alcohols can cause irritation in those with sensitive skin.

As previously mentioned, Rogaine liquid was the first Rogaine formulation to become available on the market. If AGA patients experienced good success with that formulation, then why was the foam developed?

As noted in studies and reported by users of Rogaine liquid, there were a few unpleasant adverse effects. These included itching, flaking, dryness, and redness.

However, minoxidil wasn’t the cause. Instead, the ingredient propylene glycol was to blame.

In the liquid formulation, propylene glycol works as a vehicle. This means it delivers the active drug (minoxidil) to the scalp and ensures its absorption.

Instead of reformulating the liquid formula, then, researchers decided to make an entirely new product for those who were sensitivity to propylene glycol. That’s where the foam comes in.

Rogaine foam is propylene glycol-free and, for many users, this means adverse effects have diminished.

Is One More Effective?

While this study doesn’t exactly pit the two against each other (for that, we’d have to see a comparison between foam and liquid with the same potency), it does provide us with some insight into its effectiveness at growing hair.

How Long Does It Take to See Results?

With regular strength Rogaine, positive results are typically seen in 40 percent of men over a period of three to six months (10). However, the Extra Strength formula is said to improve results in even less time.

When Rogaine liquid was first produced, 2 percent was the usual dose. The Extra Strength solution contains 5 percent minoxidil, and has been shown to produce quicker results.

Should you opt for Extra Strength Rogaine over the foam or regular formula?

If you have no sensitivity issues to either of the lighter-strength formulas, then it doesn’t hurt to give the Extra Strength a try. However, remember that results won’t improve for everyone, and you may be at a higher risk of adverse effects or complications.

Does It Work for Thinning Hair?

For men and women with AGA, the first sign of hair loss is thinning of the hairline and vertex (men) and crown (women). This is the best time to begin using a hair loss treatment, such as Rogaine.

(Learn more about the early signs of hair loss.)

Rogaine is not a miracle cure; therefore, it cannot trigger hair regrowth within dead follicles. However, it can slow the loss and put an end to thinning. This is vital if you want any hope of a thick, full scalp of hair.

When you use Rogaine at the first signs of thinning, you’re in the best position possible.

Does It Work For a Receding Hairline?

There has been a bit of debate ever since the development of Rogaine, and that’s whether it works on the hairline.

Studies have proven time and again that it’s an effective treatment for hair loss on the crown. But, what about a receding hairline. Fortunately, researchers asked this very same question in 2015, and the results were favorable.

Sixteen healthy men between the ages of 18 and 49, all with Norwood Scale hair loss of type IV-V, participated in this double-blind study (11).

All 16 men were instructed to apply their treatment twice daily for eight weeks, and photographs were taken at the beginning and end of the study to monitor hair growth.

Here are the results as displayed by one subject:

As the researchers concluded (and as can be clearly seen in the above image), minoxidil foam is effective in both the frontal and vertex scalp of patients with male pattern hair loss.

As the directions on the box are only in regards to vertex application, there are a few things to keep in mind when applying to the hairline.

Foremost, you don’t need to apply an entire dose to your hairline.

Many people who use Rogaine for their hairline either use a few small drops of the liquid (enough to spread), or half a dose of the foam version.

Just be aware of any side effects that may occur (as the skin by the temple is thinner and, therefore, more sensitive) and stop use if an allergic reaction occurs.

In addition, you’ll want to avoid contact with your face and eyes. This is a bit more difficult if using the liquid formula, which is why many users stick with foam for the hairline. If you do use the liquid, use the dropper to apply the solution to your fingertips and then massage into the hairline.

You can certainly purchase Rogaine directly from the manufacturer, but you’ll likely be paying more than if you bought from an online or in-store retailer.

Additionally, you can purchase at your local drug store (either the brand name or store brand).

In summary, many users of Rogaine foam have positive results. But this doesn’t mean it’s the only treatment approach you should consider.

In my opinion, it’s much better to focus on treating the cause of hair loss. While Rogaine is effective during use, the positive results cease as soon as treatment does.

On the other hand, when you treat the underlying cause, you can put an end to your hair loss and reclaim your life. This is possible to do when you work with a dermatologist.

Do you have questions about Rogaine foam? Leave a comment below.