Does Baldness Skip A Generation? – 2021 Guide

Your grandfather, father, and uncles all suffer from male-pattern baldness. This certainly means that you’re next in line, right? Not always.

In this article, I’d like to discuss baldness inheritance patterns.

I’ll dive deep into the science involved in genetic mutations and inheritance. This will include a look at the different genetic factors that contribute to your risk of developing MPB, as well as what you can do to lower your risk of balding.

While you can’t alter your genetics, you can take a proactive approach to baldness treatments which can lessen the impact of inheritance and give you a better chance of reversing hair loss.

How is Male-Pattern Baldness Inherited?

Before we dig in to the main question (is is possible for baldness to skip generations?), it’s important to point out that researchers are still unsure of androgenetic alopecia’s exact inheritance pattern. 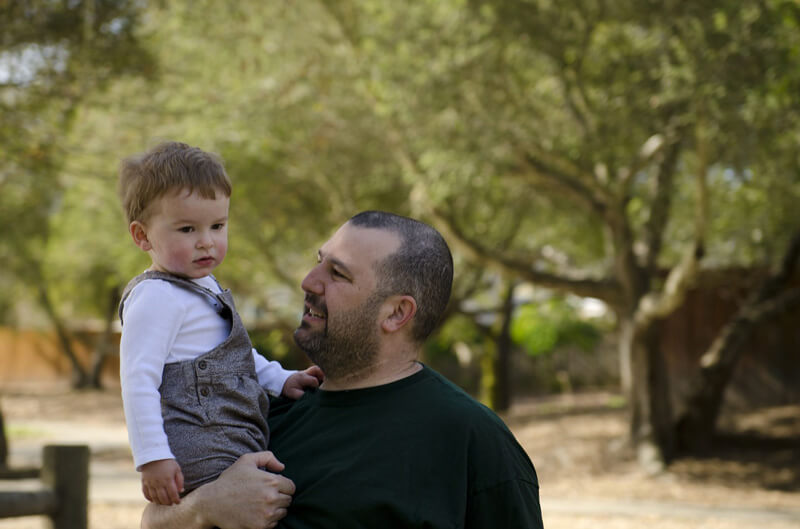 This is because there are many genetic and environmental factors that are involved in the development of male-pattern baldness.

However, let’s take a look at what scientists do know about AGA inheritance.

First and foremost, the heritability of AGA has estimates of over 80%. This is largely considered to be due to androgen sensitivity.

Androgens are a hormone responsible for pubertal development, in both males and females. In males, they’re responsible for the development of the male sex organs and secondary sex characteristics, such as growth of body hair, increase of muscle mass, and deepening of the voice.

Now, while androgens are believed to play a role in male-pattern baldness, it isn’t the androgens themselves. Instead, it’s the androgen receptors that pose a problem.

Variations (or mutations) in this gene lead to increased activity of androgen receptors in hair follicles.

A 2001 study by Ellis et. al. studied the androgen receptor genes in 553 men. 446 of these men presented with significant baldness, while the rest had no indication of baldness whatsoever.

Looking at just one particular mutation of the AR gene, it was shown that men with diagnosed baldness had a higher incidence of said gene.

In comparison, this mutation was only seen in 76.6% of the 107 non-bald controls.

Previously, a mutated AR gene was believed to be the sole factor in AGA inheritance; this would mean that inheritance patterns would be maternal.

However, further research has indicated that, while an X-linked AR gene does exist, it’s not the only factor in male-pattern baldness.

In 2009, a team of researchers discovered an associated locus at chromosome 20p11.22.

This study was performed on 1,125 males and, as shown below, indicates an increased risk of AGA in those with a mutation on rs1160312 marker of chromosome 20.

Futhermore, this study showed a sevenfold increased risk of AGA in men with both risk alleles (at 20p11.22 and AR).

As research continues, however, more and more chromosomal loci that contribute to male-pattern baldness inheritance are being identified.

In fact, a 2016 study found there to be at least 12 additional loci that were previously unknown.

Can Baldness Skip a Generation?

With a better understanding of MPB inheritance, let’s take a look at the main question.

As with any genetic condition, it’s possible for a generation to be skipped. It’s a bit more complex than that, however.

As there appears to be two major players in baldness inheritance – the X-linked AR gene and loci found on chromosome 20 – it’s very possible for AGA to skip generations.

Actually, it can even skip siblings, with some developing the dreaded balding pattern and others keeping their full head of hair.

How is this possible?

First, the AR gene is X-linked. As your mother has two copies of the X chromosome, there are three possibilities.

All that matters in your case is whether you receive an X chromosome (as men have one X and one Y) with a mutation.

This doesn’t automatically mean you’ll suffer from male-pattern baldness, but it does increase the risk.

Now, to further complicate the inheritance pattern, you also have to consider the chromosome 20 mutation.

As you have two 20th chromosomes – one from your mother and one from your father – it’s possible to have both normal, one mutated, or both mutated.

You also have to keep in mind that there are a variety of other chromosomal loci that put you at further risk of developing male-pattern baldness.

Are You At Risk of Inheriting Male-Pattern Baldness?

Even if you got a full genetic panel that showed you have both the mutated AR gene and the mutated 20th chromosome loci, this doesn’t mean that baldness is for sure in your future.

And, even without both of those mutations, there are still other mutations that could put you at risk.

But what can you do if male-pattern baldness appears to run in your family?

First, you can keep an eye out for early signs of balding. This can help you to begin treatment early, making it possible to minimize your hair loss.

if you are worried about going bald, it’s much better to take a proactive approach.

This includes altering your diet, replacing chemical-laden hair products with homemade, all-natural shampoos, and removing DHT (the androgen most commonly believed to cause MPB) from your scalp.

Male-pattern baldness typically runs in families. Does this mean that those with relatives who suffer from MPB will also suffer from it themselves?

No. This is because the genetic factors involved in inheritance are quite complex, and this means it can skip generations entirely.

If you do have family members with MPB, I do recommend that you take a proactive approach to treating hair loss. Preventing hair loss is easier than treating it once it’s happened.