So, you’re worried about your hairline and think that you’re at Norwood stage 2, or maybe a doctor has diagnosed you with male pattern baldness NW stage 2.

In this article you’re going to learn everything you need to know about the Norwood stages of hair loss and exactly what you’ll be able to do at stage 2 to avoid any further recession.

Towards the end of this article I’m also going to show you 2 natural ways and 1 unnatural way to fix your hairline and get it back to normal.

What does this classification mean for your future, and how can you go about reversing the recession which has occurred?

What is the Norwood Hair Loss Scale?

The stage of hair loss which you’re currently classified has a large impact on the treatment methods you should choose.

This is why it’s important to have a clear understanding of each hair loss stage, as well as what you can do to slow the loss or even completely reverse it.

First things first, what is the Norwood scale for hair loss? 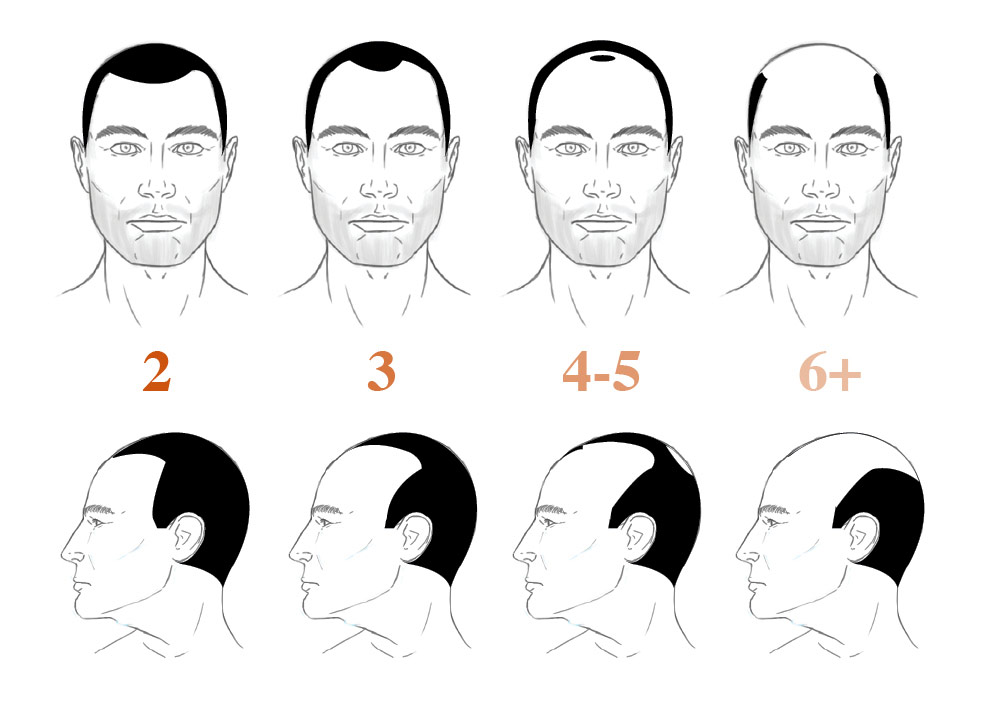 Developed in the 1950s and later revised in the 1970s, the Norwood hair loss scale is a classification method which determines patterns of hair loss.

Within the scale, there are seven major classifications, and four minor variants.

When utilized by a professional, you can obtain a classification which determines at what stage in the hair loss process you currently are.

Type I – Little to no hairline recession.

Type III – Deep, symmetrical recession at the temples that are bare or very minimally covered by hair.

Type IV – Worsening frontotemporal recession, with little to no hair on the vertex.

Type V – The hair loss seen in the frontotemporal and vertex regions are still separate, but are becoming less distinct from each other.

Type VI – The frontotemporal and vertex hair loss regions are not combined, with only sparse patches of hair remaining between the two.

Type VII – Only a horseshoe pattern of hair remains, wrapping around the back and sides of the head. The rest of the head is bald.

There’s a bit of debate surrounding hair loss classifications. This is true even when discussing a descriptive scale – one which provides very clear guidelines – such as the Norwood scale.

So, is a hairline which can be classified as NW2 a natural recession, or is it always indicative of future balding?

Well, it really depends on who you ask. But before digging any deeper, let’s define natural recession.

As you age, the hairline naturally recedes. This is known as a mature hairline, but it in no way indicates future hair loss.

Instead, a mature hairline simply gets rid of the more rounded hairline features seen in the young and provides a more distinct shape.

But when does a hairline go from mature to receding, and how can you tell?

A mature hairline can move back altogether, or you may notice a few spots which recede more than others.

When you begin to notice rapid recession in the temples, though, is when you may need to consider that baldness could be a possibility for your future.

So, back to NW2 – is it natural, or a sign of progressive loss?

In my opinion, the Norwood scale is quite clear in defining Norwood 2 as a stage in the hair loss process.

The main thing which separates a mature hairline from a NW2 hairline is the triangular recession seen in the temporofrontal region.

Yes, this can happen as your hairline matures, but if the recession continues, then it’s likely a sign of more hair loss to come.

While there are plenty of hair loss causes – including stress, illness, and medications – the Norwood scale focuses on one of the most common causes, male-pattern baldness.

Medically referred to as Androgenetic Alopecia (AGA), male-pattern baldness is a chronic form of hair loss. Most commonly seen in men, pattern hair loss can also occur in women, though the pattern differs quite a bit.

To best treat the hair loss, it’s best to understand exactly what leads to it in the first place.

In simplest terms, male-pattern baldness can be attributed to sensitivity to DHT, a byproduct of testosterone.

In all individuals, DHT travels to the scalp and interacts with the androgen receptors. These are found at the base of the hair follicles, and they’re seen in greater abundance at the temple and forehead region.

In individuals with DHT sensitivity, however, this interaction wreaks havoc. It can lead to inflammation of the hair follicle, which eventually leads to hair follicle miniaturization.

In the end, the follicle is too damaged to do its job, and hair is no longer able to grow.

As mentioned, androgen receptors are most abundance in the temporofrontal region of the scalp.

How to Treat a NW2 Hairline

The good news is if you’re classified at the number 2 stage, then your hair loss hasn’t progressed to a point where reversing its effects is impossible. Instead, you’re in a good position for stopping the hair loss in its tracks and growing healthy hair.

There’s two key elements of doing so, and they involve stimulating the hair follicles and removing DHT from your scalp.

Depending on how long you’ve been in stage 2, you may be able to lower your hairline back to its original position. This will depend upon the quality of the hair follicles, however.

To get started, I recommend mesotherapy and scalp massage – two natural methods for stimulating the growth of new hair.

As you can imagine, blood flow is crucial to the health of the hair follicle. Without proper flow, the follicles don’t get enough of the vital nutrients they need.

Both mesotherapy and scalp massage work to increase blood flow to the hair follicles. However, they both go about it in different ways.

Mesotherapy works by stimulating the scalp with tiny needles. These needles create tiny perforations, which induce healing and promote the growth of healthy new skin and hair.

Scalp massage, on the other hand, is an entirely external process, and involves the massaging of scalp tissue.

Remove DHT from Your Scalp

If DHT is the main cause of male-pattern hair loss, then removing DHT from your scalp is certainly a step in the right direction.

Over time, a plaque builds up on your scalp. This contains oil, dirt, dead skin, hair products, and even DHT. When this plaque remains on your scalp, it continues to cause harm to the follicles.

Fortunately, removing this epidermal plaque is quite simple. All you need is a few ingredients, and you’ll be ready to go!

After juicing the ginger and cucumber, combine 100 mL of the mixture with salt, charcoal, and lemon juice. Mix in the container of your choice.

Apply the mixture to the area of your scalp you’d like to target most (in this case, the temples and forehead). Massage gently, and then allow to sit for 5-10 minutes.

Rinse thoroughly with lukewarm water, and gently finish peeling the rest of the mixture from your scalp.

You may repeat this process as many times as you feel is necessary, though I wouldn’t recommend doing it more than two times per week.

5 Minutes Of Scalp Massages Per Day

Blood flow is one of the most important factors of whether your hair falls out or not. For this reason, scalp massages and exercises can be one of the most effective ways to increase blood flow and stop any further recession of the hairline.

To keep things simple, I recommend 5 minutes per day of scalp massages all over the head to loosen the scalp and reduce fibrosis and calcification (the two factors that reduce blood flow over time.)

In fact, massages can be so effective that they can restore your hairline to normal in as soon as 6 months when done consistently and in the right way without any other treatments.

Get a Hair Transplant

While this is certainly not a treatment method I would recommend – after all, there are so many natural alternatives available – it is one which many facing hair loss choose to pursue. 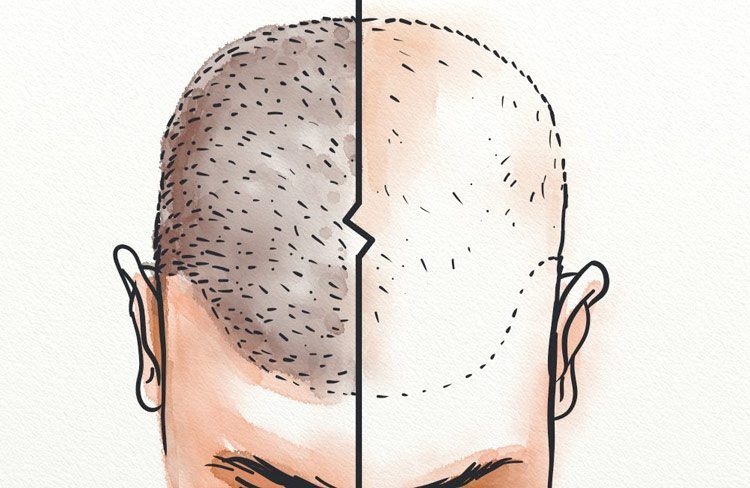 If you’re considering a hair transplant in order to treat your NW2 hairline, here’s a few things to consider:

It’s true that hair transplants can be an effective method of lowering the hairline and boosting your self confidence.

Just keep in mind that you may need to utilize other hair loss treatment methods, even after the transplant has been performed, in order to prevent hair loss from recurring.

While it’s possible for a NW2 hairline to be a result of hairline maturation, it can also mean that more hair thinning and loss is in your future.

As outlined above, though, there are many steps you can take to not only stop the hair loss, but also reverse it and lower your hairline back to its natural position.