Hair loss is a condition that affects millions of men and women worldwide. There are a variety of causes, and therefore no one-size-fits-all treatment or cure.

But one very common factor is your diet.

Your dietary intake can have a large impact on the functioning of your bodily systems. This is true for functions even as simple as hair growth.

If you can get your diet right, half the battle is won.

In this article, you will learn about the diet most likely to contribute to healthy hair. And while this diet may not work for everyone, it can be the first step in the right direction.

IMPORTANT! Before making any drastic changes to your diet, consult with your doctor, especially if you have any medical conditions.

Watch our video on the topic if you prefer viewing to reading:

Dietary fiber is a carbohydrate that resists both digestion and absorption. It, therefore, passes relatively intact through the stomach, intestines, and colon on its way to being expelled from the body. For this reason, a fiber-rich diet is a go-to for dealing with constipation, as well as improved digestive health in general.

Foods naturally rich in fibers include many fruits, vegetables, and seeds. On the other hand, processed and packaged foods are low in fiber.

According to various epidemiological and clinical studies, “the intake of dietary fiber and whole grain is inversely related to obesity … and cardiovascular disease (CVD).”

But the health benefits of fiber do not stop there.

One of the greatest benefits – and one that may be indirectly linked to pattern baldness – is its ability to improve and maintain metabolic health.

The gut contains billions of bacteria, archaea, viruses, and eukaryotic microbes – both ‘good’ and ‘bad’. Taken together, these make up the so-called ‘microbiome’ of the gastrointestinal tract.

In short, a healthy gut is one that contains enough good bacteria (known as probiotics) to keep the bad bacteria in check. This promotes overall health and helps protect from viruses and food-borne illnesses such as salmonella.

A healthy gut diet, then, is one that aims to protect our internal balance of microorganisms, so as not to push it too far towards a preponderance of bad bacteria. This is achieved by directly eating probiotic-containing foods, as well as prebiotics, which are foods that ‘feed’ the probiotics so as to grow their colony.

Processed foods contain preservatives which, almost by definition, are there to kill bacteria. This is great when you want to store something for a long time, but not so good when it comes to gut bacteria. Due to their preservatives and other artificial additives, these processed foods kill many of the healthy bacteria, upsetting the balance and causing health issues down the road.

Here is an in-depth guide to healthy gut bacteria for beating hair loss.

For now, a few very simple tips to improve your gut bacteria:

(See also here a guide to one of the best probiotic supplements for hair loss).

The glycemic index of foods is a way to measure how much of a food when digested will cause blood sugar levels to rise.

Glycemic index is a measure of how much foods raise blood sugar levels.

Foods rich in highly processed carbohydrates have high glycemic indices, as do carb-rich junk foods. On the other hand, natural, plant-based, and whole or unprocessed foods have low glycemic indices.

The table below will give you an idea of the glycemic index in various foods. One to 55 is considered a low value, 56 to 69 is medium, and 70 or more is high. 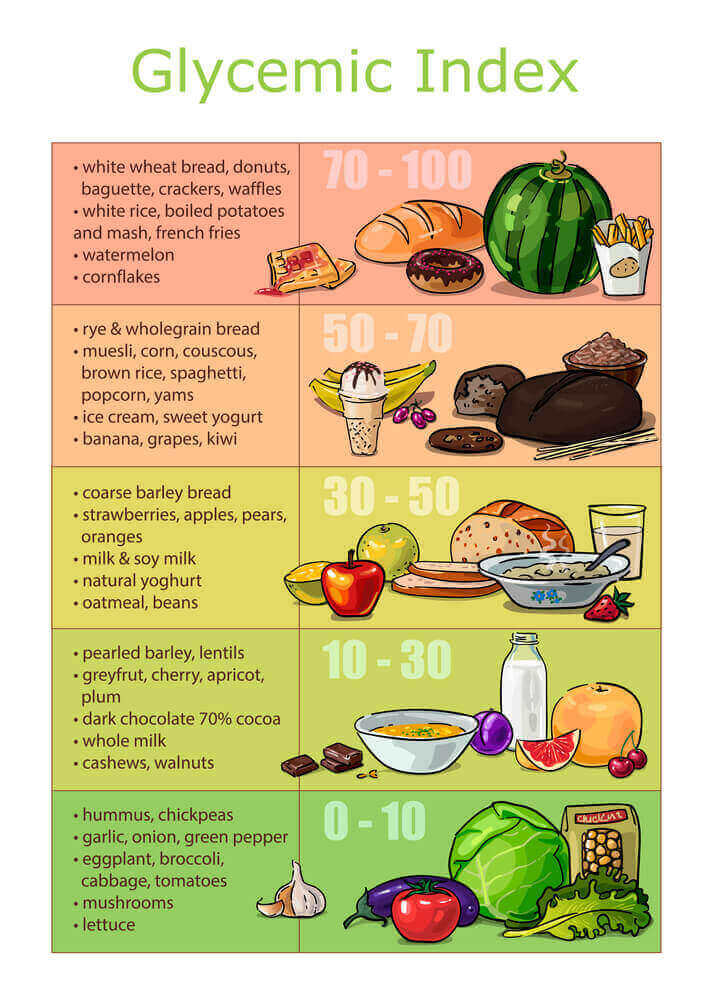 As you can see in the table, the glycemic index of a food has an inverse relationship to its nutritional value. However, glycemic load is now often used as a fairer estimation of the quality of a food, instead of glycemic index.

For example, the glycemic index of watermelon and doughnuts is the same, namely 76. However, whereas a serving of watermelon provides 11 grams of carbohydrate to be broken down into sugar, a doughnut provides 23 grams.

This difference is captured by their respective glycemic loads, which as you can see in the table below is around 37 for doughnut but only 5 for watermelon.

So when you eat foods high in glycemic index and glycemic load, this causes your blood sugar levels to spike. In response, the pancreas then releases a hormone called insulin. This hormone attaches to cells in your body, instructing them to absorb the sugar from the bloodstream and use it up as energy. Insulin also helps store sugar into the liver for future use, to be released when blood sugar levels drop too low.

In summary, insulin is essential to keep the levels of blood sugar under control.

But sometimes, when living on a chronic diet of high glycemic load foods, the body cannot cope with all this flood of sugar. The cells then develop resistance to the effects of insulin, and the levels of blood sugar stay permanently elevated.

In the medical literature, this is described as insulin resistance.

Insulin resistance and the corresponding chronically elevated blood sugar levels can cause all sorts of health issues, including Type II diabetes, Polycystic Ovary Syndrome (PCOS), and hypertension. This condition is also related to an increased risk of heart disease.

Perhaps you are already aware of some of this. But what you probably did not know, is that by this point there is strong – albeit indirect – evidence pointing to a connection between insulin resistance and hair loss.

Chronically elevated blood sugar damage the blood vessels. Scalp hair follicles, being small-scale organs in their own right, are fully dependent on an adequate supply of blood to receive all the necessary nutrients.

Also, insulin is found in hair follicles, and very possibly plays a role in the regulation of androgen metabolism, including DHT.

Tellingly, scientists have now established a strong link between male pattern baldness and the risk of heart disease (see also here). This data suggests that men with baldness might be damaging their hearts through poor lifestyle choices, of which the most important ones are dietary.

The data also shows that on average, men with pattern baldness tend to weigh more, have larger waists, higher BMIs, and have higher fasting blood sugar levels. All this suggests a possible link between pattern baldness and insulin resistance.

The science is far from settled, but the interconnection between pattern baldness and insulin resistance certainly deserves further research.

Hair loss is a complex issue and, as such, a diet change might not resolve the issue entirely. However, it can help to set you in the right direction.

Help us help you by taking a short quiz, and we'll send you a FREE copy of our Ultimate Cheat Sheet