When it comes to treating hair loss, there are many options on the market. As of now, only two of these are approved by the FDA: oral finasteride and topical minoxidil. One other option that is gaining popularity, though, is oral dutasteride.

This post will explore the similarity of two drugs: finasteride, and dutasteride. This will include a comparison of biological and chemical mechanisms, efficacy, and potential side effects. The post will also explore the possibility of dutasteride’s use as a topical solution and the benefits it may provide over oral use.

In the United States, the two FDA-approved medications for male pattern hair loss are oral finasteride and topical minoxidil (1). Finasteride works by inhibiting the synthesis of 5-alpha-reductase (5αr), the enzyme that converts testosterone into dihydrotestosterone (DHT). With the levels of DHT in the body dramatically lowered, the hair follicle miniaturization process that is the hallmark of pattern hair loss is stopped, and often partially reversed.

Dutasteride has a very similar mechanism of action to finasteride, in that it also blocks 5αr. The difference lies in its selectivity: the 5αr enzyme comes in two slightly different versions (isozymes), which are simply called 5αr type I and type II. Though there are slight differences in the amino acid sequences between the type I and type II enzymes, they both have the same function: catalyzing the conversion of testosterone to DHT. While finasteride blocks only the type II enzyme, dutasteride blocks both enzymes. This allows dutasteride to lower blood DHT levels by up to 90%, compared to around 70% for finasteride.

The Past and Present of Dutasteride

Like finasteride, dutasteride started its life as a pill for the treatment of benign prostate enlargement (2), a condition also linked to DHT and that responds well to DHT-antagonists. The drug was patented by GlaxoSmithKline in 1993 and marketed for prostate enlargement in 2001.

Though dutasteride is slightly superior to finasteride as a hair growth agent, it is only marketed for hair loss in two countries: South Korea and Japan. In all other countries, it is sold only for the treatment of prostate enlargement.

This has not stopped doctors from prescribing dutasteride to their balding patients off-label. It is typically offered to patients who have failed to respond to finasteride and are not good candidates for topical minoxidil. Dutasteride’s patent has now expired, and generic versions can be sourced at a fraction of the price compared to the brand-named Avodart.

How Effective Is It in Treating Hair Loss?

The data suggests that not only is dutasteride an effective hair loss treatment, but actually superior to finasteride. A recent metanalysis compared all Randomized Controlled Trial (RCT) studies that measured changes in hair per centimeter square (cm2), which is the most widely used efficacy metric in hair loss studies (3). Summing the data from all the trials, oral finasteride 1mg daily gave an average 15.9 new hairs per cm2 versus placebo. This compared to 17.6 new hairs for dutasteride 0.5mg daily. For reference, both of these 5αr inhibitors outperformed minoxidil, which gave only 14.9 and 8.1 new hairs in the 5% and 2% solution, respectively.

When translated in terms of cosmetic improvement, a figure of 17 new hairs per cms2 in the balding areas of the scalp will correspond to mild or minimal regrowth. In other words, regrowth is often so small as to be barely visible to the naked eye. Like finasteride, the real power of dutasteride lies in its ability to stop further progression of hair loss and its practicality for long-term use. 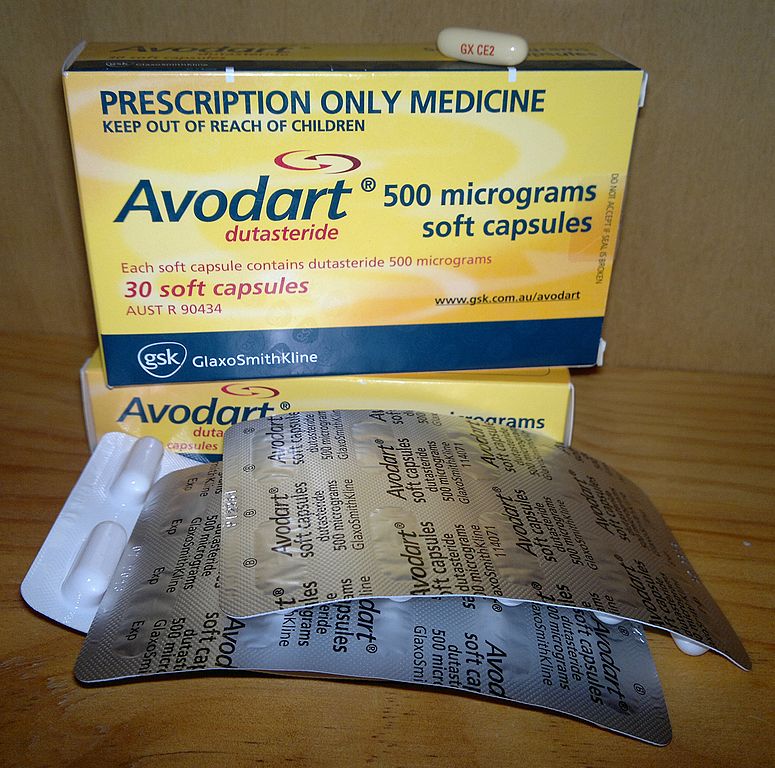 The slightly superior regrowth observed with dutasteride might be down to two factors. First, it blocks both 5αr isozymes, even though type II is predominantly responsible for hair loss. Second, it has a much longer half-life (four weeks) compared to finasteride (six to eight hours). This means it will stay in the system and exert its biological activity for far longer than finasteride.

The ease of use, low cost, and proven effectiveness of oral 5αr inhibitors in stopping further hair loss make them the first-line choice for the treatment of male pattern hair loss. Having said that, a major problem – and one that often deters prospective users from starting treatment – is its potential side effects.

Users of both medications risk problems with decreased libido, erectile dysfunction, changes in sperm parameters as well as gynecomastia. The frequency of sexual side effects has been found to range from 3.4 to 15.8% of men (4). Depression and fatigue are also among the reported side effects, though far rarer. These side effects will often resolve on their own, but if they persist the user must discontinue treatment.

The only option for men who would like to try a 5αr inhibitor but are put off by the prospective side effects is a topical version. The idea behind the topical application is to get the benefits of the medication while avoiding systemic absorption and distribution to other tissues.

When it comes to finasteride, it is absorbed into the bloodstream about 15 times less when applied topically compared to the oral version (5). At the same time, topical finasteride results in approximately the same reduction of DHT levels in both the bloodstream and the scalp (6). This suggests that topical finasteride is equally as effective as its oral version, with a fraction of the side effects. While we admittedly lack large-scale clinical studies, the limited published data to date suggests that topical finasteride is equally effective in promoting hair regrowth while also having a far lower incidence of sexual side effects (7).

Compared to topical finasteride, topical dutasteride has received far less attention. This might have to do with the fact that it is not marketed for hair loss, and it also has a higher retail price relative to finasteride. A large part of it also comes down to chemistry as dutasteride molecules are more difficult to deliver in a topical formulation. This is due to their larger size and heavier molecular weight. Largely for this reason, the majority of studies with topical finasteride have not used a liquid solution but injected the dutasteride into the scalp. This is a procedure widely known as mesotherapy, or intralesional therapy.

Mesotherapy involves the use of fine needles for delivering a series of injections into the subcutaneous fat area (8). It is a non-surgical treatment and has a modern history of around 70 years, though it probably goes back millennia. It has been used for a variety of conditions, from fat reduction, injury rehabilitation, and skin rejuvenation. While plant extracts, vitamins, and proteins are usually injected, mesotherapy is increasingly being used with pharmaceuticals like dutasteride.

Dutasteride mesotherapy has one significant advantage compared to a topical solution, and that is the frequency of treatments. To start, treatments are typically once per week. These later reduce to once every two weeks. These extended intervals are only made possible by dutasteride’s long half-life and would not be possible with finasteride mesotherapy.

On the other hand, mesotherapy is not a treatment that can be carried out at home but only at the premises of a licensed professional. This means substantially higher costs.

A small number of clinics and compounding pharmacies globally offer topical finasteride for cutaneous use, either in liquid or in gel form. The solutions are typically at 0.05% strength and often combined with minoxidil to create a synergistic effect.

Unfortunately, there are no clinical research studies that have evaluated the efficacy and safety of these formulations. Their limited popularity suggests they are probably not particularly effective.

Given the large size of dutasteride molecules and their limited absorption by the skin, the main topical (non-systemic) method of delivery has been intralesional, in the form of a series of injections in the scalp. While apparently free of sexual side effects, intralesional dutasteride appears to be about half as efficacious as its oral version.

At the same time, the need to have the injections done at the office of a specialist makes this a far more expensive treatment. It seems likely that non-systemic dutasteride will remain a relatively obscure treatment option, primarily for patients unwilling to take oral 5αr inhibitors.