Minoxidil is a popular treatment, used widely by men and women with hair loss. And, while 2% and 5% are the most common dosage solutions used, the 10% solution could be a more effective way to improve hair growth results.

In this article, I’m going to compare minoxidil 10% to minoxidil 5%. There are no direct studies available on the topic, but some assumptions can be made based on the research studies that are available.

NOTE: Minoxidil 2% and 5% are the only solutions which are currently FDA-approved for the treatment of hair loss in humans. More studies are required on the benefits and dangers of minoxidil 10% as it is NOT an FDA-approved dosage. Do see a doctor before you proceed with treatment.

Minoxidil in the Treatment of Hair Loss

Minoxidil was developed in the 1950s, first marketed as an ulcer treatment drug, and then as a vasodilator.

As studies continued, it was found that the use of minoxidil led to unexpected hair growth.

It was believed to be a result of its vasodilating properties, enabling the capillaries in the scalp to become dilated and improving their abilities to deliver nutrients and oxygen to the hair.

As time wore on, further studies were performed to better understand minoxidil’s role in the treatment of hair loss. This eventually led to its FDA approval in 1988, and it’s been available ever since.

(Are you considering adding minoxidil to your hair loss treatment routine? Learn about its most common side effects here.)

One such study was performed in 2002, and it compared a 5% solution of minoxidil to a 2% solution in men with Androgenetic Alopecia (AGA).

Once baseline data (including nonvellus hair count) was collected, patients were instructed to apply 1 mL of solution (either 5%, 2%, or placebo) to their scalp twice per day (with a total daily dose of 2 mL).

After the initial visit (week 0), subjects returned every 4 weeks until week 32, and then every 8 weeks until the end of the 48-week trial. Safety and effectiveness evaluations were performed at such times.

These were the results as seen in week 48:

The information we’re most interested is located on the right side of the table labeled Pairwise comparison P value. This tells us which of the compared solutions is superior.

In all of the investigator results (nonvellus hair count, change in scalp coverage, and benefit from treatment), you’ll notice a significant preference for 5% minoxidil over 2% minoxidil.

Remember that nonvellus hair count was measured at baseline? Here’s a look at the changes experienced by study participants over the course of the trial: 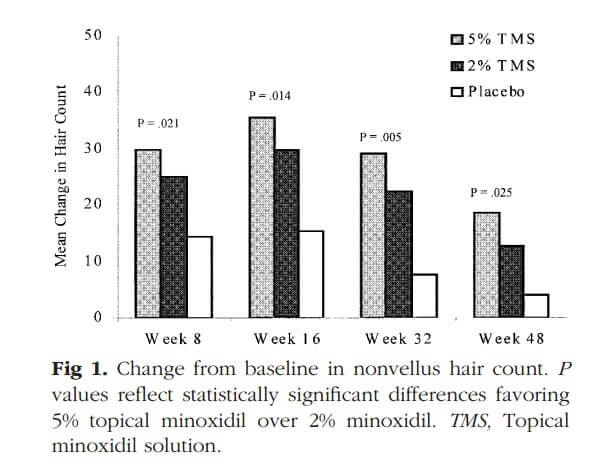 As easily noticed above, the 5% minoxidil solution performed better than the 2% solution during all evaluations.

This study wasn’t the only one to see such results, though. A similar study was performed in 2004, but this time with a focus on female-pattern hair loss.

As expected, the 5% minoxidil solution performed better than both the 2% solution and the placebo.

As shown above, dose response is a common occurrence in scientific research.

But what exactly is dose response, and what does this mean for the effectiveness of minoxidil?

In simplest terms, dose response is an expected increase in effectiveness as dosage increases.

For example, when subjects were treated with 5% minoxidil (instead of 2%), their results were better (more hair growth, increased density, etc.).

Of course, there are exceptions to the rule. However, as highlighted by the studies above, it seems that minoxidil is one drug that follows this rule.

So, while we don’t have a study that compares 10% minoxidil and 5% minoxidil directly, it’s safe to say that the 10% solution would likely show more results than the 5% solution.

Keep in mind that the results, while increased, aren’t likely to be proportional to dosage.

What I mean is that you can’t expect to see twice as much hair growth with the 10% solution than the 5% solution, because dose response doesn’t typically happen as such.

At around 10% I would expect results to plateau even if the dosage was increased. This is the law of diminishing returns, where side-effects would increase without any benefits.

With increased results, will there also be increased side effects?

The active ingredient within minoxidil, minoxidil sulfate, is fairly harmless.

It’s the non-active ingredients, such as alcohol and propylene glycol, that tend to cause the more noticeable side effects (particularly those related to skin irritation).

This means that, technically speaking, increased side effects should not be seen with increased dosage.

Is is possible? Absolutely. In fact, an increase in pruritus, local irritation, and hypertrichosis was noted in the 5% treatment group in the 2004 study referenced.

That’s why higher doses (including 10% solution) are only available through prescription and require the oversight of a doctor while in use.

(Are you suffering from itchy scalp due to minoxidil use? Learn how to fix the issue here.)

It’s unfortunate, but sometimes even those medications that are touted to be a miracle cure by so many users don’t work for certain individuals.

But what if Minoxidil 5% is working moderately well, but you feel that results are behind others on a similar regimen?

First, I would recommend you not compare yourself to others, even those who’re taking the same treatment steps as you.

Hair loss is typically a multi-factored occurrence, and everyone will react differently to the same course of treatment.

Of course, you can always seek the help of a dermatologist, and perhaps receive a prescription for 10% minoxidil.

However, there’s a much different path I would encourage you to take, and that’s a natural one.

What I mean by this is, instead of masking the issue as minoxidil does, why not treat your hair loss at the source?

Other FDA-Approved Treatments for Hair Loss

If you’re considering minoxidil for hair loss, then you may be open to other FDA-approved treatment options on the market.

There are only two FDA-approved treatments for androgenetic alopecia: minoxidil and finasteride.

Finasteride is a 5-alpha-reductase inhibitor which decreases the levels of DHT in the body. This can be used to target pattern hair loss, though it does come with the potential for side effects.

The only person who can decide whether an FDA treatment for hair loss is right for you, as well as which one, is you. You will also want to consult with your doctor prior to starting treatment to ensure there’s no drug contraindications.

While no studies have been performed to compare minoxidil 10% and minoxidil 5%, the results from 5% vs 2% studies suggest that a higher dosage can deliver better results.

So, should you switch to minoxidil 10% if  you aren’t seeing results with the 5% solution? That’s only a question you can answer. Remember to talk to a qualified medical professional before getting started with any FDA approved hair loss treatment.