Asian Hairline: What Are The Differences And Is It Receding?

Thinning and hair loss – in Asia and around the world – can cause considerable suffering to both men and women. And while the percentage of hair loss in non-Asian countries remains consistent, did you know that hair loss in Asia is on the rise?

In this post, I’ll discuss the pattern of Asian hair loss (including how it may differ from other ethnicities). I’ll then explain how you can treat it naturally.

An Introduction to the Hairline

The hairline is a distinguishable line of hair follicles that runs from temple to temple along the forehead.

In regards to Androgenetic Alopecia (AGA), the hairline is where hair loss is most typically noticed first. In fact, even those without AGA will likely see a regression in their hairline at some point or another.

(Learn the difference between natural regression and hairline recession here.)

This is because the hairline of most individuals contains DHT-sensitive follicles. When exposed to DHT, the follicles begin to miniaturize and thinning occurs.

Without treatment, the follicles will continue to miniaturize. Eventually, this can lead to permanent hair loss.

The Pattern of Asian Hair Loss

The Norwood-Hamilton scale for hair loss is commonly used when discussing the progression of AGA. However, it’s not one that can be used to appropriately describe Asian hair loss.

Similarly, a Chinese study found 12% of women who participated in the study showed a loss pattern associated with Male Pattern Hair Loss (MPHL).

Additionally, an Indian study found that 18% of participants didn’t fall into one of the Norwood-Hamilton classifications.

This complicates matters when it comes to diagnosis, and it can lead to confusion and disappointment for Asian sufferers of AGA.

But why is there a variation? There are no solid answers to this question. Though, there are a few theories.

First, consider the fact that regions of follicle sensitivity may vary from ethnicity to ethnicity.

This would explain why many Asian men experience hair loss first on the vertex (or even on the sides), while Caucasian men tend to experience on the hairline.

Second, hair growth patterns do vary by ethnicity. This means that while hair loss may begin similarly across the board, it may take awhile to see differences based on hair density. 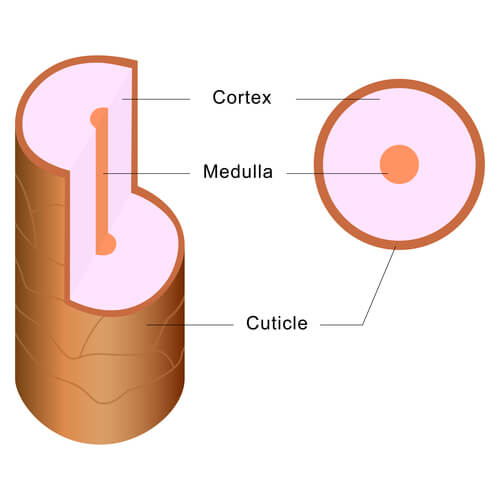 Last, Asian hair (and hair follicles) has a lower density than Caucasian hair and it’s also thicker per strand. This has to do with the number of cuticle layers that make up the structure of Asian hair.

For reference, a hair strand is made of many layers but the outermost layer is known as the sheath. The sheath consists of cuticles, which are made up of tightly-packed dead skin cells.

There are various layers of cuticles, but Asian hair has been shown to have the most when compared to African and Caucasian cross sections.

What does this mean for hair loss?

In essence, Asian hair is more difficult to break down. It is effected by DHT and miniaturization at the same rate as Caucasian hair, but its effects aren’t as obvious as quickly.

Essentially, the cuticles must be “chipped away” over a longer period of time for actual thinning and hair loss to be noticeable.

Interestingly, we know that scalp tension plays a large role in pattern baldness.

There is a variation in skull structure across ethnicities and this may affect scalp tension which could subsequently lead to baldness.

How to Combat Hair Loss At the Hairline and Beyond

Whether your hair loss began at the hairline, or you’re dealing with an atypical pattern, there are steps you can take to combat it.

While there are things you can do to stop hair loss temporarily, only when you know the cause can you find a more permanent solution.

For men and women with AGA, the cause is a sensitivity to DHT. Of course, other conditions (including stress, illness, and medications) can increase the rate at which hair is lost, but DHT is the main culprit and must be confronted accordingly.

So, how can you know for sure that AGA is the reason for your balding?

Even if your hair loss isn’t the typical pattern associated with AGA, there are other signs to be aware of. These include:

2. Treat It At Its Source

With the cause now understood, it’s time to take an effective approach to hair loss. This approach will vary by cause, but here’s what I recommend.

First, you’ll want to stop the hair loss as quickly as possible. Initially, you can do this by removing DHT from the scalp.

To do this, I recommend you clean the scalp and then follow up with a dermarolling session.

While this shouldn’t be done frequently, a scalp peel can remove layers of build up – including oil, dirt, hair product, and even DHT. To learn more about performing the peel, check out this post.

With your scalp prepared, you can now begin dermarolling. This stimulates hair growth by 1) increasing blood circulation; and 2) promoting regeneration of the hair follicles. Do not share a dermaroller. 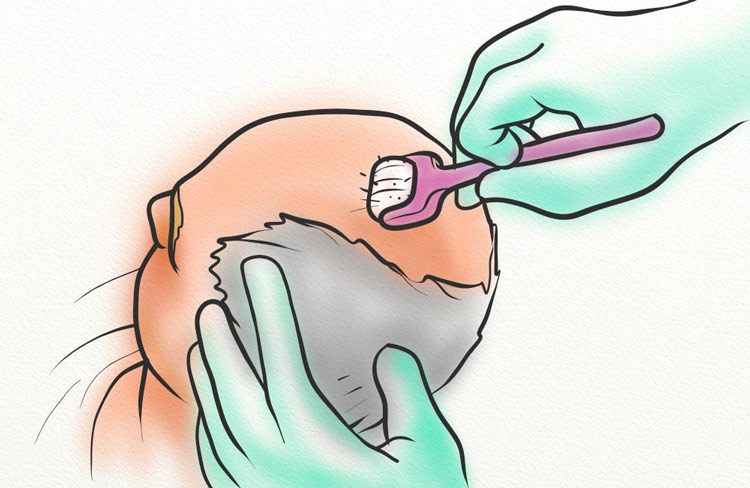 Second, it’s time to create a healthy environment for further hair growth. One way to do this is by increasing blood flow to the scalp and hair follicles.

There are a few ways to do this, though the three most common (and effective) are:

When used together, you can boost circulation and bring your scalp back to its former health.

While Asian hair loss doesn’t always follow the typical pattern, this doesn’t mean it cannot be treated. However, the earlier you begin treatment the better.